Few consoles boast a library of role-playing experiences as deep and vast as that of the Super Nintendo. Over its seven year lifespan, Nintendo’s second major home system became home to many of the most beloved RPGs of all time. Mostly Japanese-developed, these adventures range from the brilliant refinement of turn-based NES classics Final Fantasy and Dragon Warrior to the real-time action of Secret of Mana and Illusion of Gaia. And, of course, Mario’s first great RPG outing, which uniquely falls somewhere in between.

The Nintendo Wire team seems to constantly be having impromptu discussions about this unforgettable, genre-defining generation of games so we decided that it’s time to make it official, and document our picks for the best RPGs on SNES. These are Nintendo Wire’s favorite Super Nintendo role-playing games: 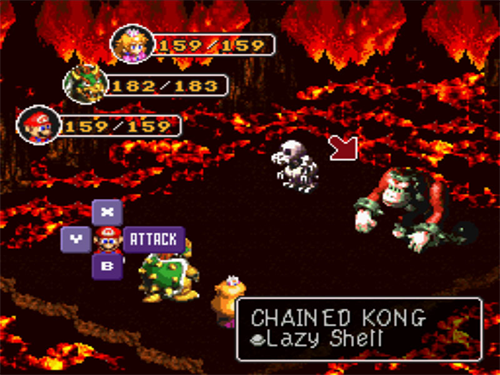 A glance through old articles by myself would show a known and notable fondness for a certain game a bit later down this list, but that doesn’t mean I can’t enjoy others every now and then. Super Mario RPG exists as a lighthearted, enjoyable game that’s a marriage of Square’s RPG sensibilities and the wonderful world of Mario. Bringing timed hits and platforming elements along for the ride, it offered plenty of variety at its core and stands as a game that would inspire others both within and beyond the Mario series. The amount of personality within the game is endearing and at times genuinely funny, with Bowser getting time to shine as an actual ally to Mario in the face of a common enemy.

The original characters from this game are some of my favorite in any and all Mario games, like the wealthy manchild Booster or the ragtag bunch of teens known collectively as the Axem Rangers. The two that really steal the show are original party members Geno and Mallow. A guiding star spirit possessing a wooden doll and a sentient cloud raised to believe he was a frog, these two have both won a place in my heart and I hope some day can be used in Mario games again beyond quick cameos. That said, there’s nothing stopping me from savoring their one-off adventure (and its incredible soundtrack by Yoko Shimomura) with Mario time and time again. 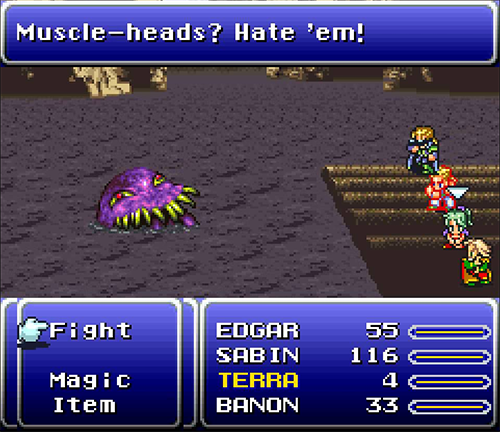 The beautiful and haunting melody that accompanies the hulking, mechanized armored soldiers up the snowy bluffs above the town of Narshe sets an uneasy tone that scarcely lifts for the entirety of Final Fantasy VI’s unforgettable campaign. This is still one of the series’ most vividly detailed portrayals of an imperiled world, and the first to veer away from strict fantasy territory and into an equally technology-inspired setting. Steel and steam brilliantly complement swords and sorcery, providing a backdrop that feels perpetually gritty, and setting a trend that many subsequent games from this and other series would follow.

Another departure from the Final Fantasy formula that allowed FFVI to truly shine was its incorporation of a huge cast of playable characters, including a few that are entirely optional. Despite the size of the cast, each character is still allowed more backstory and emotional attachment than most RPGs manage to instill in just a handful of protagonists. The winding plot – which deals with governmental tribulation, environmental stewardship and unchecked ambition for power – smartly forces you to spend time with all of the game’s key players, both friend and foe. Moments like the raging river raft ride that divides your party, the opera house performance and the maniacal laughter of the clown-like villain, Kefka, as he dumps poison into a river used by countless innocents have always stuck with me, no matter how many great RPGs I’ve enjoyed since. 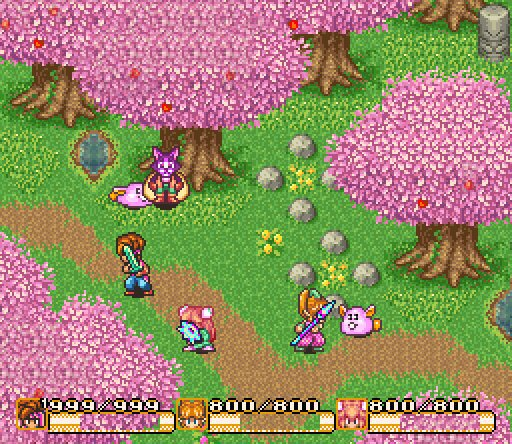 Secret of Mana is an unbridled masterpiece that deserves full credit for both introducing and hooking me to the RPG genre. To this day I still find myself captivated by its beautifully ominous, yet lighthearted soundtrack and mesmerizingly vibrant characters, environments and animations. Inspired just as much by The Legend of Zelda as its Final Fantasy brethren, SoM seamlessly integrated intuitive action gameplay with elements of traditional turn-based RPGs to create one of the most memorable gaming experiences of all time, best exemplified through its pick-up-and-play nature and innovative ring menu interface that allowed for quick access to various items, weapon equips and magic attacks. Props for also being the first game ever to bring me to tears for its emotionally charged narrative, despite its relatively rushed localization efforts and shoddy translation.

While a fantastic solo experience in its own right, Secret’s greatest appeal was by far its ability to be played cooperatively with up to three friends – a rarity for RPGs in general, especially back in 1993. Anyone lucky enough to own the SNES Super Multitap accessory knows exactly what I’m talking about, fighting relentlessly for control over Popoi: the somewhat overpowered, yet underappreciated black mage of the intrepid hero’s entourage. Given its many influences and liberties taken with the genre, it’s no wonder that Secret of Mana is consistently considered one of the greatest games of Nintendo’s super powered system, providing the gold standard by which action RPGs live and die by. I highly encourage anyone who hasn’t played this legendary gem to jump into the Wii Shop Channel immediately and experience this influential classic in all its 16-bit glory (still waiting impatiently on that eShop release Nintendo / Square-Enix). 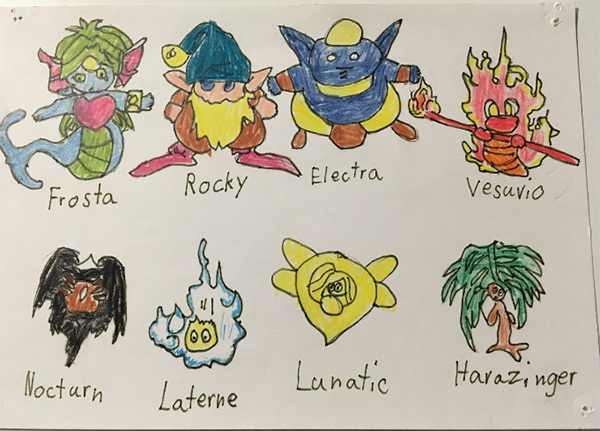 All the game’s elemental spirits sketched by my 8-year-old self, complete with Germanic denominations. Fun fact: I wake up every morning to my phone blaring the intensity that is Secret of Mana’s boss battle music. I’m clearly a glutton for punishment. 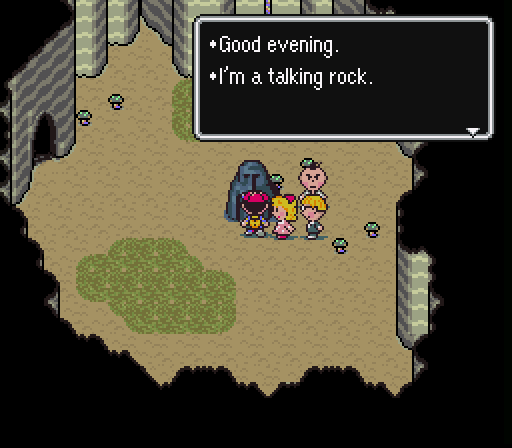 To explain every last intricacy of the sublime and surreal journey that is EarthBound would take ages. In a time when almost all RPGs were medieval sword and sorcery affairs, the tale of a young boy and his friends taking on ancient alien evils with baseball bats, frying pans, and psychic powers was incredibly original. Set in a world that feels like an affectionate parody of 50’s and 60’s America, EB trades its goblins and orcs for street thugs and coffee cups. Every last bit of the game is wonderfully bizarre, adding to the almost phantasmagoric atmosphere it projects.

Yet the game lives by much more than its weirdness. A simple yet tight battle system with mechanics that lessen the grindiness of the game make playing it smooth. The localization is one of the greatest ever, filled with smart writing and memorable lines. And the world and experience of the game effortlessly draws the player in and makes them interact with it in ways nobody could think possible. EarthBound is much more than a simple RPG – it’s a mesmerizing experience, a heartwarming discourse on childhood and growing up, and my favorite game of all time. 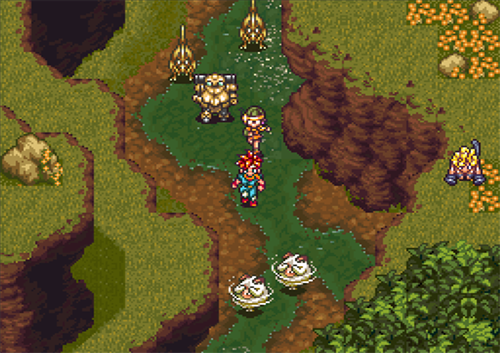 Here we are at last to a game that will always be my go to answer for a great Super Nintendo RPG experience. For while Super Mario RPG is a great entry point and EarthBound is both one of my personal favorites and the perfect middle ground in terms of RPG staples mixed with unique Nintendo flair, Chrono Trigger is a polished gem of a Square RPG that has stood the test of time to remain one of the most critically acclaimed and memorable experiences on the console. With a plot that takes players to the past, present, future, and beyond time itself in varying degrees, it allows the game to host several unique characters all with stories in their respective ages that need tending to. When a game allows me to form a party alongside a friendly looking robot from the future and a medieval frog-knight I know it’s a game worth playing.

The game’s identity and lasting appeal owes a lot to its dream team of creators. Hironobu Sakaguchi and Yuji Horii, creators of Final Fantasy and Dragon Quest respectively, united to create this single game. That pedigree alone would be notable but Chrono Trigger also boasted character designs from Akira Toriyama (of Dragon Ball fame) and was the composing debut of Yasunori Mitsuda, who has gone on to become prolific in his own right, while also featuring music from famed Final Fantasy composer Nobuo Uematsu. This team up was unprecedented but makes Chrono Trigger’s success and renown all the more easy to understand.

While the game can prove a bit easy compared to other RPGs this actually plays to its strengths, with it never feeling overbearing and allowing players to enjoy the world and times around them comfortably. The battle system was also supremely rewarding, with combination attacks existing for all party members. By becoming proficient in these dual and triple techs, players were gifted powerful and visually impressive means to combat enemies and it’s a shame more games don’t take such lengths to make the playable party feel like a cohesive group. The game also featured multiple endings and some elements of player choice, New Game + modes, and allowed players to attempt the final battle at almost any point. Add in optional side stories for the party members and a great supporting cast of characters and you have a game that rightfully stands as the pinnacle of 16-bit RPGs.