The Super Nintendo was approaching the end of its console life and the N64 was already finding its way into players hands; HAL Laboratory decided to give Kirby another starring role on the SNES. As the last Nintendo published game on the Super Nintendo, Kirby’s Dream Land 3 was a real visual achievement. 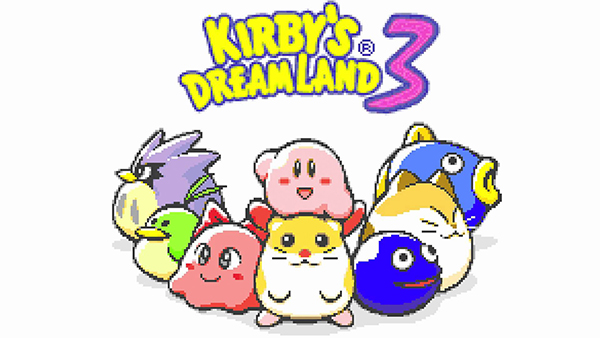 The game opted for a pastel, crayon inspired look that made the game look soft and gentle. With a technique known as pseudo high-resolution adjacent pixels were able to blend their colors together to create this unique approach to the visuals. It also utilized a more advanced internal chip for visual effects, allowing the game to be vibrant while still retaining its more subdued style. This was a far cry from Super Star’s highly saturated colors and more pixelated sprite work but appears as a natural evolution of Dream Land 2’s style. This is fitting, as Dream Land 3 was the next directorial effort of Shinichi Shimomura in the series, further distinguishing his work from Masahiro Sakurai’s.

One thing it did take from Super Star, however, was the addition of multiplayer. At any time, Kirby could sacrifice some of his health to spawn Gooey, a character that had appeared in Dream Land 2 as a health restoring friend who would appear sometimes in place of an animal. Established as a being made from the same stuff as Dark Matter but still on your side, he would allow a friend to help out similarly to helpers from Super Star. Rather than inhale enemies, Gooey would wrap them in his tongue to attain their copy abilities. This came at the price of costing Kirby some of his health, but allowed for a lot of fun to be had with a friend. 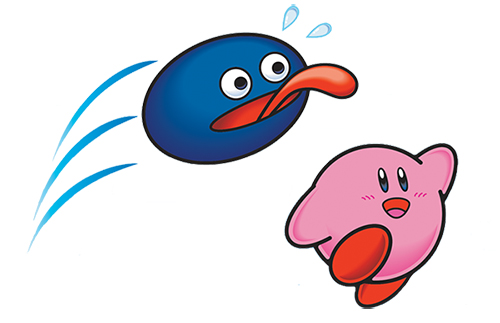 Dream Land 3 stands out in the series for not having many elements that would go on to make repeat appearances, other than most apparently in its immediate followup. That said, its additions are just as charming and allow the game to occupy a standalone place amongst other titles. Following Dream Land 2’s footsteps in more than name, Dream Land 3 returned to the simplified Copy Ability system alongside the return of Kirby’s animal friends. Rick, Coo and Kine were all back alongside three new faces: Nago the cat, Pitch the bird, and ChuChu the octopus. Kirby wouldn’t be riding any of these three, as they each have a unique twist to the animal friend system. Nago would roll Kirby along like a ball in front of him while Pitch had to be carried along in front of him. ChuChu was the most subversive of all though, actually riding atop Kirby’s head.

These three would all receive the same variations on the seven returning copy abilities, and all six animal friends along with Kirby himself would have a new power to try. The Clean feature stands as an extremely unique ability across the whole series, being derived from the Broom Hatter enemy. While these foes have gone on to appear several times before and since they’ve only ever provided a Copy Ability in Dream Land 3. On his own, Kirby would take their broom and be able to sweep up certain spots and potentially reveal secrets. While each animal friend would have access to a different cleaning supply for the same effect, their Clean attacks were generally more potent than Kirby’s own sweeping. 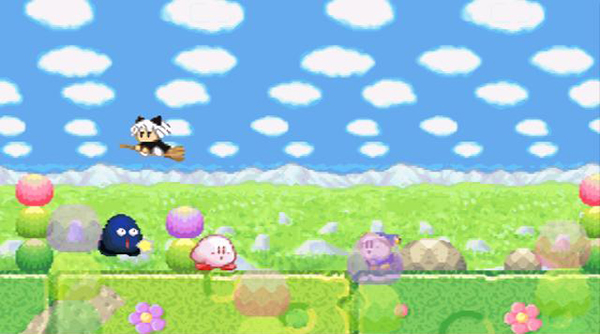 The reasoning behind Clean’s inclusion and future omission may have to do with a system of collectibles unique to Dream Land 3. Like the Rainbow Drops from Dream Land 2, Dream Land 3 featured a completion based collectible in the form of Heart Stars. There was one hidden in every stage of the game and they were generally tied to some kind of puzzle, character or minigame. These objectives would follow a pattern from world to world, such as needing to bring a certain animal friend to end of every world’s fifth stage or having to complete a small challenge in every world’s third. This added replay value to stages and made for an overall slower, more thoughtful pace than Super Star. Personally, I enjoy both types of objectives and while I like Super Star more as a game, there’s an undeniable charm and place for Dream Land 3’s more relaxed mood.

Darkness just below the surface

That calm identity and pastel look hides a bit of treachery though, as this marked the return of Dark Matter as an enemy. By collecting all the Heart Stars and combining them into the Love-Love Stick Kirby could face (and rescue) a possessed King Dedede before venturing into the surreal final area and taking on Dark Matter once again. Once defeated, the true final boss, 0 (that is, Zero), would make its debut as the very last obstacle. As a giant floating white sphere with a single red eye, it stands out amongst the rest of the game’s tone. Surrounded by smaller Dark Matters, it’s implied to be the source of the darkness that continuously encroaches on Dream Land, though nothing is ever stated plainly about 0, making them all the more mysterious and eerie. Furthermore, once defeated, the eyeball at its center detaches from its body with a visible blood effect, something that stands in stark contrast to any Kirby game before it and almost every one since. 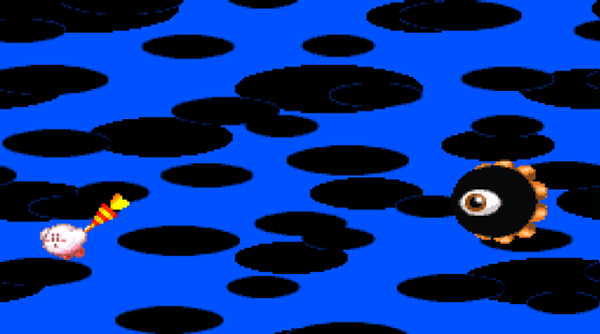 Dream Land 3 is an often overlooked part of the series due the timing of its release, but it laid the groundwork for its N64 followup. As a whole, I do enjoy Dream Land 3, though not with the same fervor as some of the other Kirby games I’ve written about. It comes highly recommended all the same, especially on lazy days or whenever you just need a smile to brighten up your mood. One look at the game in motion is usually enough for me, and I hope someday the series will return to its style, world and characters.