Kirby & the Amazing Mirror: Both Kirby and not-so-Kirby

Kirby’s second outing on the Game Boy Advance would be his first original game in the mainline Kirby series in four years. The gap between releases brought us the innovative gyro controls of Tilt ‘n’ Tumble, the stellar remake of Kirby’s Adventure known as Nightmare in Dream Land, and Air Ride’s Warp Star based spinoff. By 2004, however, Kirby was due for a new, exciting adventure that followed the series’ platforming roots. Kirby & the Amazing Mirror filled that quota, while also fully pushing the series into territory it had only dabbled in before. By using the game engine already developed for Nightmare in Dream Land, Amazing Mirror’s development was able to focus on these newer additions and create an entry in the franchise that deviates from the norm while still feeling like a Kirby game.

The world inside the mirror

This familiar-yet-different trend extends to the game’s narrative, locations and enemies as well. High above Dream Land there exists a portal to a second world, where wishes made into mirrors are granted. This Mirror World can only be accessed by said portal, and when Meta Knight realizes something is wrong with the wishes being granted he investigates, only to be bested by a dark doppelgänger. This Dark Meta Knight proceeds to attack Kirby, splitting the lovable glutton into four different Kirbys each with a different color: pink, yellow, red and green. Giving chase, the four Kirbys enter the world inside the mirror to figure out what exactly is going on, see what’s happened to Meta Knight, and eventually save both worlds. 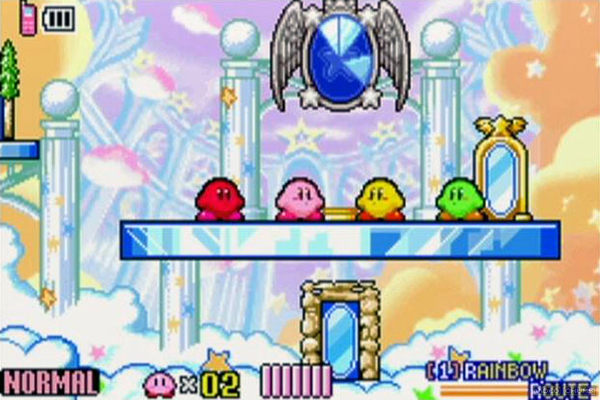 The Mirror World stands out against other Kirby locations in that it provides twists on areas from older games set in Dream Land. The areas definitely take inspiration from their predecessors, but they in no way copy them. Bosses were able to get in on this parallel world business as well, one example being the early encounter of King Golem reflected as a stone version of series mainstay Whispy Woods. While some might see it as retreading the same ground, I can forgive this perceived recycling due to just how unique Amazing Mirror is when placed against the rest of the Kirby games.

Tying back to the narrative, the fact that Kirby has been split in four allows for the expansion during multiplayer. Two players could adventure together as far back as Super Star and in Dream Land 3, and they were able to both utilize copy abilities thanks to Gooey; Amazing Mirror not only allowed each player to be Kirby, but it also expanded the number of players to four. Even when playing solo, the other three Kirbys were still around, exploring independently. This aspect may not have affected the game much, but it did allow players the opportunity to be introduced to a new and unique feature in the series. By using a cell phone that Kirby just happens to have this time around, he could call the other Kirbys to his side to help fight off enemies or to regroup when playing multiplayer. 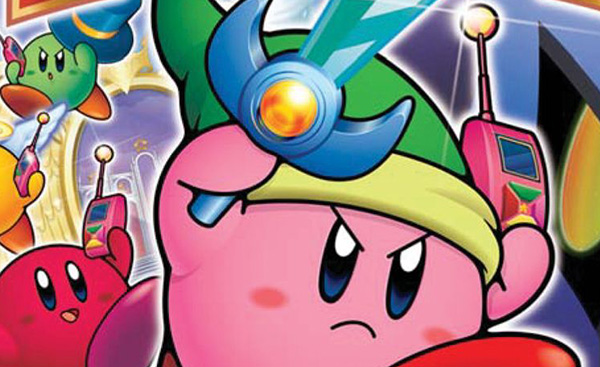 The cell phone feature was necessary with respect to multiplayer due to the expansive nature of Amazing Mirror. The game world was massive compared to past games and everything was continuous and interconnected. Once enough progress was made, you could take multiple routes through the game world and travel in a nonlinear fashion. The cell phone could even be used to call Warp Star at almost any time to catch a ride back to a central hub area with warps to the different sections of the world. That kind of scale had never been done in a Kirby game, nor has it been done since.

Sometimes passage may be hindered by the need for a certain copy ability or require that you find a hidden switch, but there were rewards to be found beyond just progression. With enough exploration, things like life bar extensions, pathways across worlds, or even spray paints that allow you to customize Kirby’s coloration could be found. This sense of being rewarded for traversing the entirety of the map was first touched upon within the series via Super Star’s Great Cave Offensive mode, but here it existed on a much larger scale. Having 100% completion was a very rewarding thing and the sheer vastness of the Mirror World ensured that it wasn’t going to be easy. 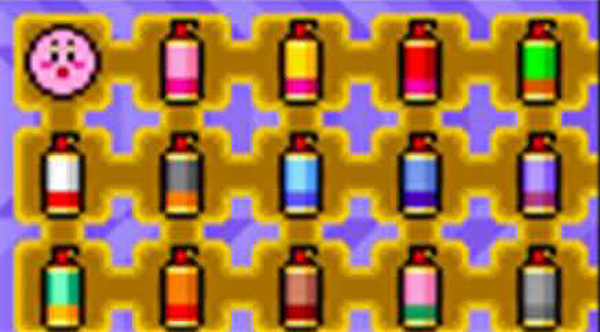 Dare to be different

These two main features – multiplayer and the interconnected world – borrow heavily from two other Nintendo franchises. The quartet of Kirbys is highly similar to the Four Swords entries in The Legend of Zelda series. This can be traced back to the company Flagship, who had a hand in development of Amazing Mirror, as well as multiple handheld entries of the Zelda series, including almost every game featuring the Four Sword mechanic. The approach to the game’s world is very reminiscent of the Metroid series. As stated, this was a new style for Kirby and one that wouldn’t stick in future games. While I’m glad Kirby games have maintained what could be called their own unique identity, seeing them borrow elements from other series lead to a standout handheld experience, and I’d like to see another game that attempts this style in the future.

When it comes to new copy abilities, Amazing Mirror’s additions haven’t appeared in many games since, but they still offered fun gameplay opportunities. The marquee addition was Angel (or Cupid) Kirby. Featuring free flight and a bow and arrow for attacks, it was a cute yet effective ability that would only go on to make one other appearance in the series. Magic is one I’m particularly fond of as well, though here it acted as a one time use ability, like Mike or Cook. The Smash ability stands out as well, being a reference to Kirby’s appearance in Super Smash Bros. When utilized, he’d gain his special moves from that series as well as a few other techniques and references, though sadly no hat. Stretching the crossover even further, the ability was gained by inhaling Master Hand himself who would appear as both a mini boss and a whole world boss alongside Crazy Hand. While it’s also been seldom seen, Smash will be making a return appearance in the upcoming Planet Robot as a reward for scanning the Smash Bros. Kirby amiibo. 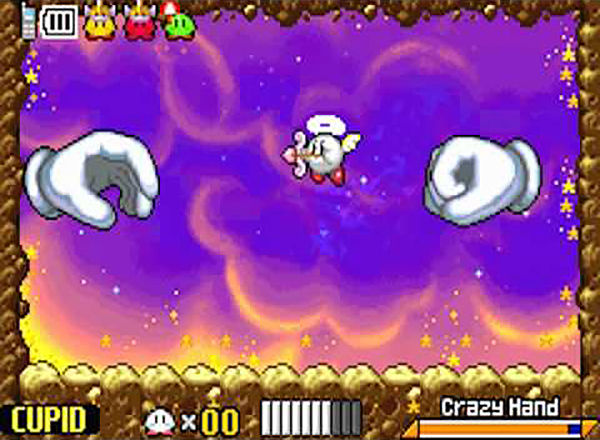 I don’t hear people talk about Amazing Mirror nearly enough. As something so distinct within the series, it’s a shame, though that daringness to try something new may have been its downfall. Similarly, the soundtrack isn’t nearly as memorable, though there are a few standouts. The Forest/Nature Area track has found its way into Super Smash Bros., even gaining a remix for the Wii U version, and I’m quite fond of Peppermint Palace and Candy Constellation. I also love the way the game looks, improving on the already top-notch sprite work seen in Nightmare in Dream Land. Recent games have been starting to give Amazing Mirror more love though, and I hope this is a trend that continues. It may not reach the highs of some of the earlier entries, but Amazing Mirror more than deserves its place within the series. Just like a reflection, it’s simultaneously Kirby while not being Kirby, and when it leads to a massive experience made better with friends then I’d say that’s a pretty good thing to be.