Impressions: Windjammers on Switch is a breath of fresh air

One genre that has sadly gone the way of the dinosaurs, it seems, is the wacky, arcadey sports game. I love titles like NBA Street, Daytona USA, and even extreme sports like Tony Hawk and Snowboard Kids. In this day of overly-involved sports simulators full of loot boxes and microtransactions, seeing a game that uses simplicity as its mantra is thrilling. The Nintendo Switch has gotten one more cartoony sports game in the form of a port of Windjammers. And while Windjammers is far from new, it’s a breath of fresh air nonetheless.

Windjammers is a 1994 arcade title developed by Data East and published by SNK on the Neo Geo platform. It’s a sports game that combines frisbees, tennis, soccer, and ’90s shoulder pad fashion. Two players pick from six characters, all from different countries, and play a one-on-one match. The sport itself has the players throwing a disc in an overhead view back and forth, trying to get it into the goal behind their opponent. The disc bounces off of walls and can be knocked or thrown high up in the air over your opponent’s head. There are zones worth 3 points and 5 points in the goal, and a dropped disc is worth 2. First to 12 points wins the set, and the first to two sets wins the match. 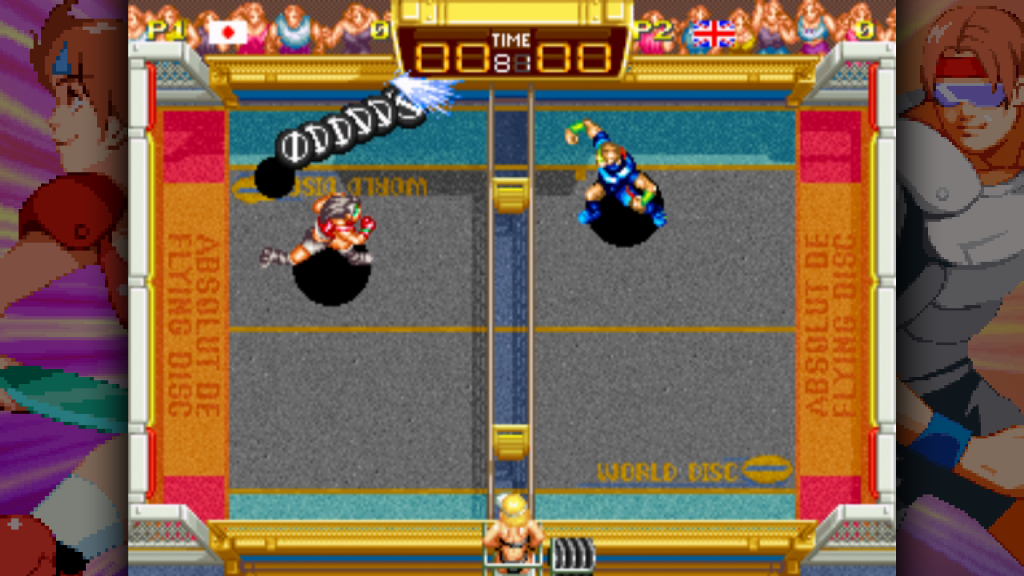 The controls are beautifully simple. One button throws the disc up in a lob, and the other button does… basically everything else: throw the disc, dive, and knock an oncoming disc into the air. When a disc is knocked into the air or lobbed, a target appears on the ground. Stand in the circle long enough, and you can unleash a tricky special shot.

And, honestly, that’s the full breadth of the gameplay. Windjammers is a game that can be learned in the span of one match, but pays off every time you play it, very similar to a fighting game. It becomes about reactions and predicting what your opponent will do, making the overall gameplay fast, fun, and wonderfully snappy.

The Nintendo Switch version of Windjammers, ported DotEmu, who is also developing the Switch-exclusive Windjammers 2, is the same as the PlayStation 4 version of the game. It has an arcade mode, online play, and both single-console and wireless versus mode. The game offers various visual and audio options, including CRT and scanline filters, and the Neo Geo and Neo Geo CD audio. The graphics still look sharp decades later, with smooth animations and bright colors. It shows how good sprite work can make a game timeless. 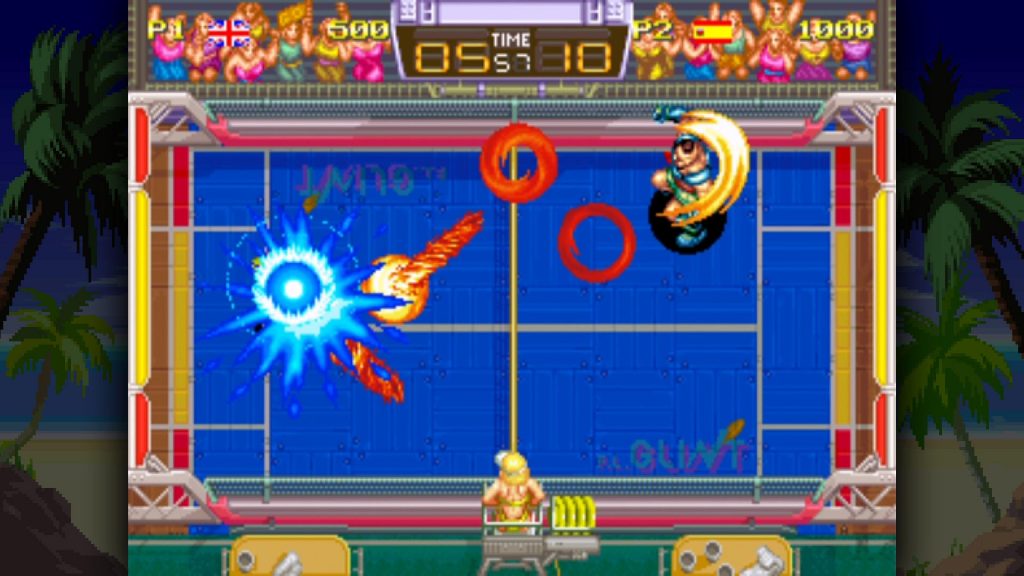 Windjammers is a game that needs to be played with other people. While the arcade mode is fine, there’s nothing like outsmarting a human opponent. The local multiplayer works fine, but the online is much more hit and miss. The developer has said that a patch fixing many known connection issues will be coming soon, so I’ll avoid commenting too much on the connection issues at this time — but the matches I did play online overall felt pretty good. The lag within the matches varied depended on the connection quality, but they still ran pretty smoothly. There doesn’t seem to have a massive player base at the moment, though, so in order to get the most bang for your buck, it’s best to play with friends on the couch.

Overall, Windjammers is a throwback to a time when sports games could be wacky, simple, and insanely competitive. It’s a slick package that boasts beautiful pixel art, tasty chiptunes, and fast, skillful gameplay. The online play may not be totally stable at the moment, but if you’ve never played it, Windjammers is an unbeatable multiplayer experience. So grab some friends, some 3D Doritos and Five Alive, and have a rad trip to the ’90s, dude.