Out of all the classic JRPGs to come out of the Square and Enix powerhouses during the Super Nintendo era, Star Ocean is one of the most oft forgotten. Originally released in 1996 exclusively on the Japanese Super Famicom, it has went on to have multiple entries with varying levels of critical and commercial success. It’s also notable for skipping Nintendo platforms, until now, as the PSP remake of the first game in the series launches for the Nintendo Switch on December 5, 2019.

On the surface, Star Ocean has a hook that still stands apart from other JRPG series, in that it’s unabashedly science-fiction inspired. The intergalactic drama is essentially Star Trek with anime cat girls, and the ability to walk around spaceships in such a genre never really gets old. Unfortunately, these moments are few and far between in the first game, as it still leans hard on typical fantasy tropes.

The game’s protagonist, Roddick, grew up in a typical fantasy society, where swordplay, magic (known as “symbology”), and monsters are commonplace. You get introduced to the science fiction elements relatively early on, as a duo of space explorers teleport down to the planet’s surface to investigate a mysterious plague, but rest assured, most of your early game time will be spent rushing around a world of fantasy, sword in hand. In fact, the game almost seems eager to get back to such a setting, with a time travel concept stripping the crew of all futuristic gizmos and gadgets almost immediately, stranding them firmly in a simpler age. 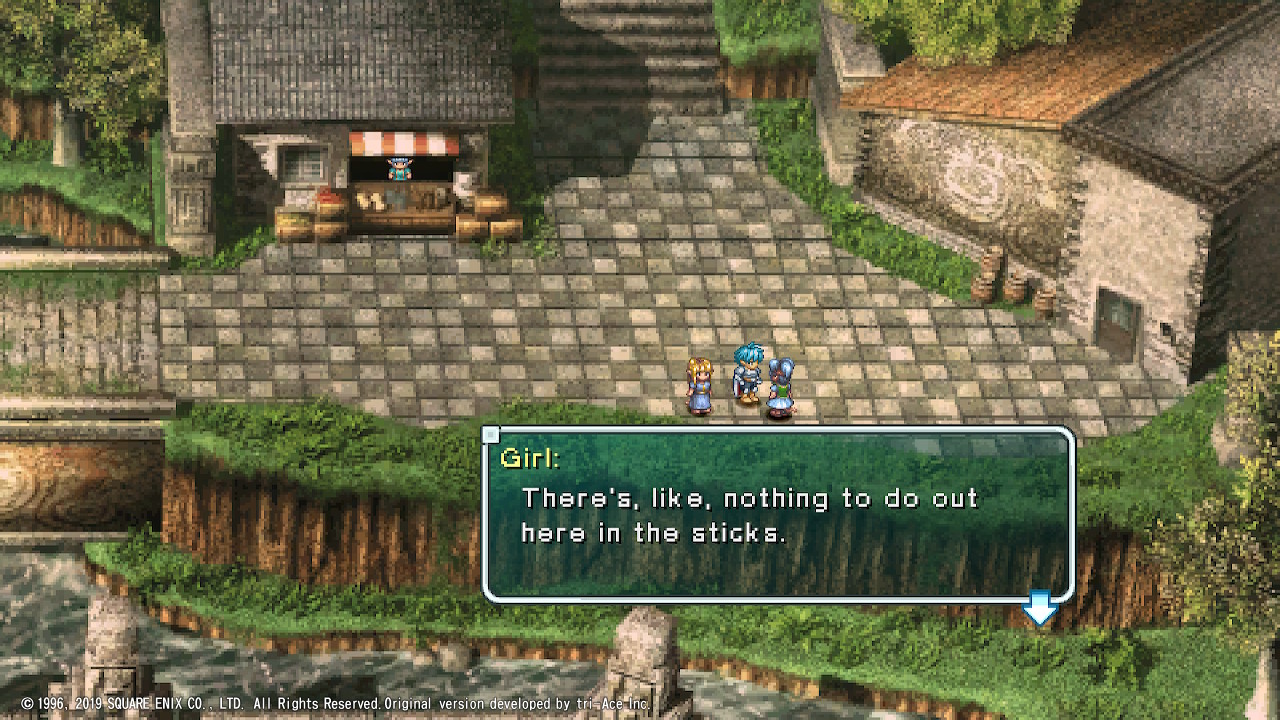 While this adherence to JRPG tropes does feel like a missed opportunity, at the same time there’s something strangely comforting about it. As more and more modern JRPGs are set in the present day or more steampunk-inspired environs, there’s something to be said for heading back to basics, and Star Ocean is bound to give classic JRPG fans that cozy feeling.

While Star Ocean: First Departure R follows in the footsteps of previous Square Enix ports to the Switch, with features like an increased resolution, a fast forward button, and new assets; it’s mostly identical to the PSP original. This is most noticeable when it comes to the game’s pre-rendered backgrounds, which have been blown up with little to no smoothing. While, personally, I find this aesthetic fantastic, it will look more than a little blurry on big-screen TVs, something which is only exacerbated more by most of the text in the game being similarly blocky. 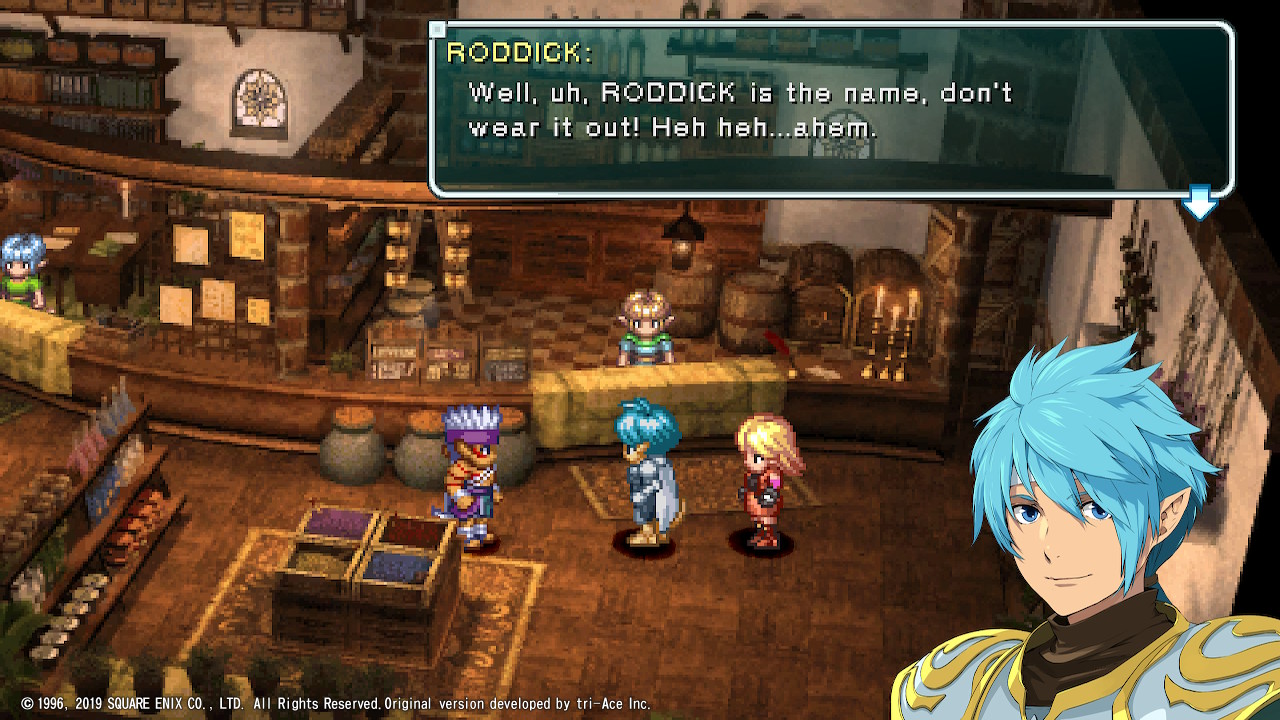 One element which was updated for the re-release, however, was the portraits. These are the aforementioned updated assets, and they’re gorgeous. While the original First Departure character artwork has a charm of its own, and better reflects the in-game cutscenes, swapping over to the new designs by Katsumi Enami is very much worth it; as they’re surprisingly expressive, beautifully drawn, and help give the game that science-fiction edge, even when the story has moved onto more terrestrial matters.

Fans of Japanese voice over are also in for a treat as the game contains two Japanese vocal tracks, one from the original PSP release and another featuring a new cast. That’s not to say the English dub is bad, however, as it’s a veritable who’s-who of 2007’s most iconic voice actors, from Yuri Lowenthal (Peter Parker in Spider-Man for PS4) as the protagonist Roddick to Melissa Fahn (Cowboy Bebop’s Edward) as the franchise’s soon-to-be recurring character Welch Vineyard.

So Many Skill Books

When it originally released, Star Ocean was one of the first JRPGs to replace the standard turn-based fare with action combat. First Departure kept this intact, but it’s undeniably pretty simple compared to later installments in the series and the similar “Tales of” franchise. Most of the time you’ll be hammering the A Button, only occasionally running your character out of the way of attacks and unleashing special moves of your own with the L and R buttons. While this would get tiresome in overlong fights, most battles tend to be over pretty quickly. More than anything, you’re most likely to be sick of the hilariously constant attack shouts than any other aspect of combat.

The combat isn’t a cakewalk if you enter into an area you’re unprepared for though, and the game will barely give you any indication if you’re dooming yourself. This is where the most glaring omission from Square Enix’s recent ports comes in — there’s no autosave. Early on in the game, I ventured into some mines a party member pointed out (who admittedly said we could always come back later). I went in, expecting to face slightly more challenging monsters than those outside, but soon enough my entire party was wiped out. That’s when I got a Game Over, and realized my last save was an hour and a half prior.

While that was definitely on me for relying too much on a modern convenience, it definitely highlighted how First Departure R is still a game from 1996 at its core, and you have to approach it with that in mind, despite its slightly more modern exterior.

While I’ll always be a little frustrated with how little Star Ocean initially played with its extremely enticing science-fiction premise, I have to admit that it’s an exceedingly nostalgic game, even for someone who never played it back in the day. Much like the game’s story itself explores — it’s always worth heading back in time to see where things started.