Impressions: Salt and Sanctuary on Switch

Up until recently, I had never been one for side-scrolling adventure games. Metroid had never appealed to me, and as fun as it was watching my uncle play through different Castlevania games, I could never really get into them on my own. I dabbled a bit with Samus Returns last year, but it wasn’t until Dandara and Hollow Knight that something special clicked with me and the genre. With my newfound appreciation for the brand of the game, I jumped at the chance to play Salt and Sanctuary. For the most part though, I found that it wasn’t quite what I expected.

Salt and Sanctuary wastes no time throwing you into the action — and very, very little is explained to you as you first start out. You create your character, choosing from one of eight classes and setting your appearance. After that, you’re given a short explanation that a princess on your ship is in danger and then you’re thrown right into the action, put up against a wave of enemies attacking your ship. I was unable to defeat more than two of them and quickly washed ashore on an island. The path leading up off the beach was littered with messages in bottles which do have instructions for some of the controls in them, but they’re slightly difficult to read. Continuing up the path brings you to the game’s first “Sanctuary,” a safe space where you can regain your healing potions and reset the enemies out in the overworld. Sanctuaries also allow you to spend your accumulated Salt, gathered from each enemy you defeat, to level up, granting you a skill point in the form of a Black Pearl. These Black Pearls can be used to select skills from the skill tree. 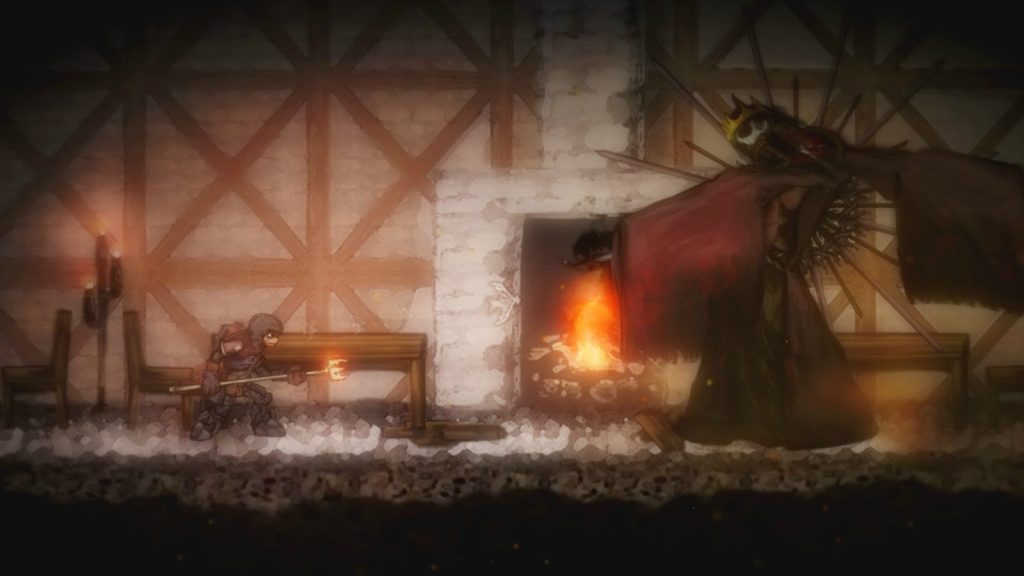 The skill tree alone is extremely intimidating at first — it spirals and splits and reconnects over a vast area, and it took me a long while to really dive into it and understand what everything meant in order to decide which direction I wanted to take my character. Sanctuaries seemed few and far between in my experience, but someone with more diligence in exploring may come across more than I did. Other Sanctuaries you come across can have NPCs in them to help you with your quest, such as a blacksmith who will sell you new weapons and upgrade the weapons you already have. These NPCs also give vague dialogue referencing the state of the island or bits of different religions that are the backbone of most of the Sanctuaries, but other than that, there’s very little story here.

Salt and Sanctuary’s combat system feels incredibly frustrating at first, due in part to the issues with the game just throwing you into the thick of everything mentioned above. It took me some time to figure out the correct timing of the combos at first, but once I got the hang of it I really felt like I was in the zone. After I finally got into the groove with the combat, I began to enjoy the little details. Each different style of weapon has its own combos with unique animations, and the variation in fighting styles was greatly appreciated. 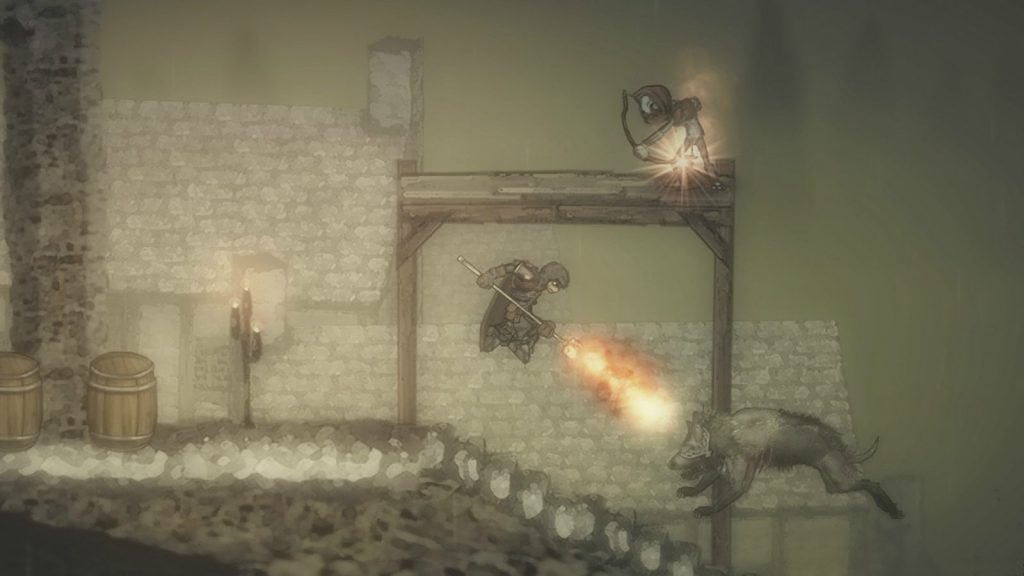 I started my adventure as a cook, so I was using a long-handled pot to beat down the enemies at the beginning of my journey. After beating the first boss I came across — which took a seemingly unholy number of tries — my world was quickly opened with several more weapons. Right away I found a spear, and a poleaxe shortly thereafter, and began to gravitate towards the Pikeman skill class, putting my skill points, represented by Black Pearls, into building up my abilities with spears, poleaxes, and reapers. The long reach and flashy combos are very appealing, and I’ve found great success against most enemies while using them. I’ve since begun to branch out into using simple axes as well, but if put in a tough spot I won’t hesitate to break out my trusty poleaxe.

The game feels what could be described as “hard” at first, though the more I played I realized it was more unforgiving that anything. You will die a lot, to a lot of things that seem silly or stupid. Compounding some of the frustration with this, you’ll lose all of your accumulated Salt when you die, and can only get it back by slaying the enemy that slayed you. If this enemy was particularly strong and killed you by taking you by surprise, it may be hard to kill it to retrieve your Salt, and if it kills you again, you can kiss that Salt goodbye.

Enemies are hard to see in the early indoor areas, and most rise from the ground like zombies with no warning. Others can shoot you with crossbow bolts and arrows, slowing your progress and doing a significant amount of damage over time if not taken care of. More than a few times I found myself trapped between two hatchet-wielding enemies that suddenly appeared from the ground, and was unable to escape their offset attacks which came at a surprisingly quick pace. You’ll never beat a boss character on your first try, though I learned as time went on that I could easily grind Salt in order to level up thanks to the enemies resetting each time I stopped at a Sanctuary. This grinding, paired with my newfound love for spears, allowed me to beat the second boss I came across in only three encounters, which was incredibly motivating. 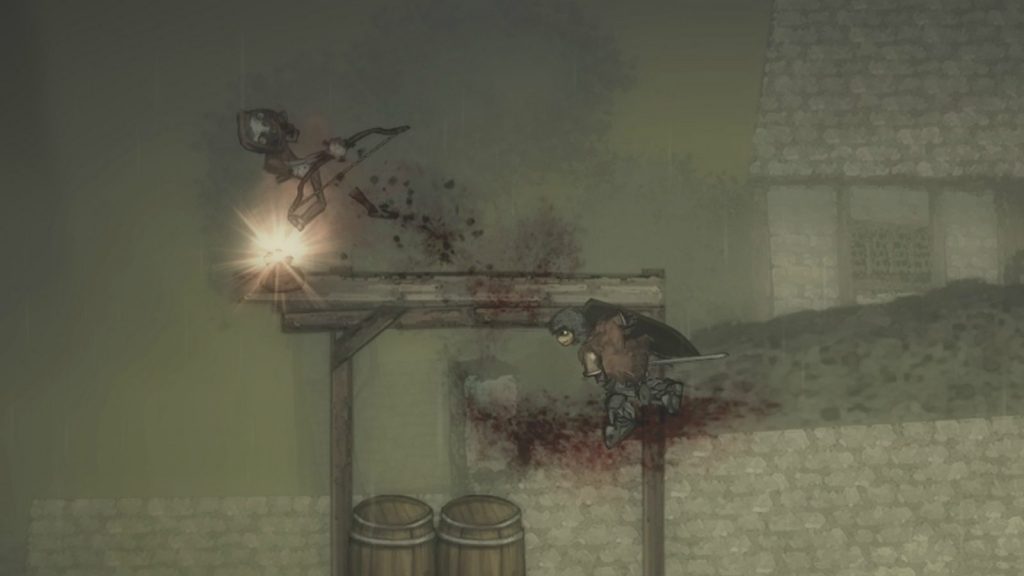 Indoor areas of the game are exceedingly dark, which doesn’t pair well with handheld play, especially when traveling in bright light. This darkness can be alleviated by torches, but it doesn’t feel like the torches were designed for this constant darkness — you die so often that running through these areas with a torch in hand each time will quickly burn through your stash. I found it easier to learn the area, usually with trial and error rather than a torch, and just go off of memory when I had to head back through. There are areas that are purposely pitch black, and torches definitely help out in these cases; often a nice little treasure is hidden deep within them as well.

Salt and Sanctuary’s art looks gorgeous at a glance but upon closer inspection plenty of pieces left me wanting more. The character creator immediately felt like an “edgy” flash game you would have seen on the internet in the late 2000s. Once you get playing it’s harder to notice how “cheap” it looks, especially in handheld mode. I didn’t experience any slowdown or frame-drops, which made for a pleasant experience. 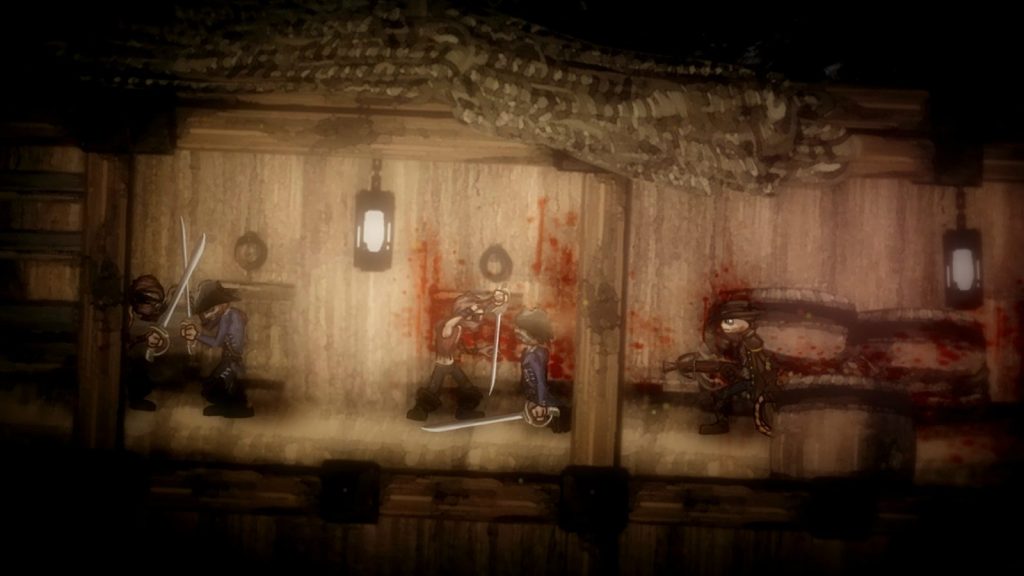 Overall, Salt and Sanctuary looks a lot clunkier than it feels while playing — in fact, once you get into the zone with the combat, as I mentioned earlier, the movements feel plenty satisfying. With the exaggerated blood and violence, paired with the flashy attacks, I couldn’t help but grin when taking down enemies one after another. Most of the time you’re allowed to execute an extra attack on an enemy after it’s been killed, blowing it to bits with a lot of blood spray, and I won’t lie: it really got me excited each time I was able to pull it off.

At most, I found myself satisfied with Salt and Sanctuary, but only once I really started to get the hang of it. For a casual player looking into the game, there are a lot of turnoffs early on, though those who stick around will find something to enjoy if they spend some quality time with it. The gameplay drew me in, and there were moments when I looked forward to coming back to it to play some more, but that wasn’t happening all the time.

The lack of a story combined with the lackluster visuals made it hard for me to fall in love with the game, but I can’t deny that I loved how weighty and visceral the combat looked and felt while playing, and was absolutely floored with the amount of fighting styles available to use. I’m sure this game has some die hard fans out there, but in short, Salt and Sanctuary is a game I’d recommend to someone who was willing to take the time to learn how to enjoy it, not someone looking to be hooked from the get-go.