Retro City Rampage DX stomped its way onto Switch last week, and we’ve spent some time with the game. While the 8-bit style classic has been on other platforms for quite some time now, we wanted to see what the experience would be like on the Switch.

Immediately upon starting the game’s first mission, the suitably named “Player” is greeted with countless references from all edges of the pop culture world. My first task was a parody of the famous bank robbery scene from the first minutes of The Dark Knight, complete with the escape into the line of school buses after the heist is finished. Marty McFly’s adventures are also heavily referenced, with a doctor that needs Player to find a “Flax Combobulator” and a task that requires hitting 88 pedestrians in order to charge the time machine.

Through the first 30 minutes alone I also noticed nods to Doctor Who, The A-Team, Inception, Duck Hunt, The Oregon Trail, and there were likely countless others that went right over my head. The references are constant, and they add to the experience each time one crops up. 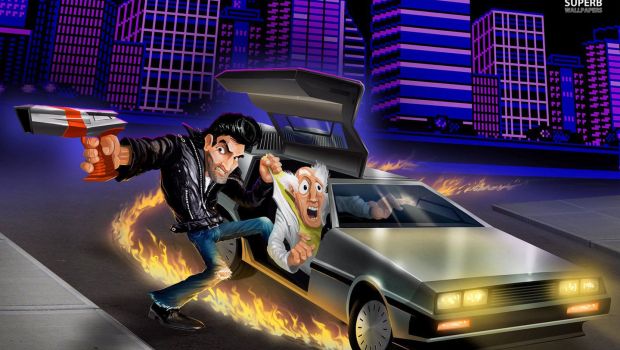 Rampage DX grants the player freedom while also providing over 60 structured missions to take on. The missions I’ve played up to this point have been enjoyable, such as infiltrating an enemy base, or tracking down the parts to complete the time machine, but free roaming around the city is really where this title shines. I’ve encountered so many fun quirks around Theftropolis, my favorite being tasked with the job of a Cabbie, taking passengers to their destinations à la Crazy Taxi while also being chased by the cops.

The weapon variety Retro City Rampage provides never gets stale. You can take on opponents with guns, missile launchers, batons, or even your bare hands. The mechanics for each weapon type are fairly similar, but their effects are all different enough to make each one feel fresh. 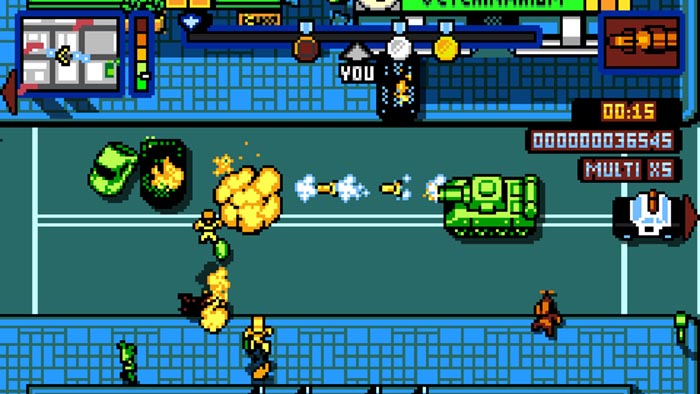 Creativity is encouraged in this sandbox world, as there aren’t many limits to what I could and could not try. I enjoyed hijacking cars and creating a street-wide barrier on the busiest road in town, creating a pileup of traffic. Aside from the main campaign, Retro City Rampage DX is sure to provide hours of gameplay, especially on the go.

Rampage on the go

Retro City Rampage and the Nintendo Switch are a match made in heaven. The game looks stunning on the television, but it also thrives in handheld mode. I tried to push the game to its limit by getting as many cops, tanks and bullets going on the screen at once, and there wasn’t one technical hiccup.

Retro City Rampage is definitely worth picking up on the Switch, as it’ll most certainly be a title you can return to when you have just a few minutes to pull out your Switch and play. With fun references, addicting frenetic gameplay and plenty of freedom, Retro City Rampage DX is a worthy addition to any Switch library.