Impressions: Nommin’ on neon with PAC-MAN Championship Edition 2 Plus

I rarely jump into sweeping generalizations, but it’s safe to say pretty much everyone knows PAC-MAN. Mazes, dots, ghosts, and one mouth-flapping yellow disc mix together to make one of the most iconic video games ever, to the point you can play it on most things with a screen one way or another. It’s when you change up that formula though that things really shine, and PAC-MAN Championship Edition 2 Plus is no exception. 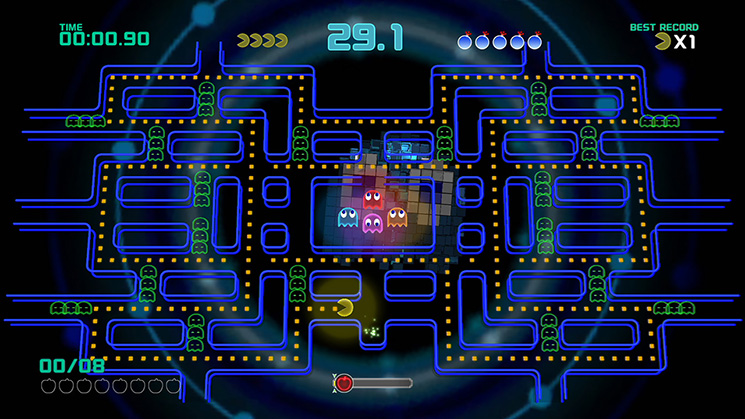 You’re still doing the usual PAC-MAN things, but it’s the way that you’re doing them that’s changed. Eating dots isn’t the objective of the maze anymore, it’s eating fruit. A meter on the bottom of the screen fills as you chomp dots, making a fruit appear at your starting spot once full that’ll then bump you to the next maze as soon as you’re done snackin’ on it. Ghosts don’t immediately cost a life, it’s the ticking timer that’s more likely to end you. Ghosts instead slow you down and will become aggressive (and deadly) if you bump into ‘em too much too quickly.

All of this adds up to a game style where speed is king and eating everything only pushes your score higher. The dots aren’t all over the place, but in a clear and guided path. It’s just about having the reflexes quick enough to see that path and how to take it. Along the way you’ll wake up snoozing mini-ghosts that react to your PAC-presence by stepping in line behind one of the regular ghosts. These ghost trains lead to the ultimate catharsis of devouring the entire line, often times so voraciously that PAC-MAN is lifted fully up and and out of the maze in a cascade of colors and voxels. 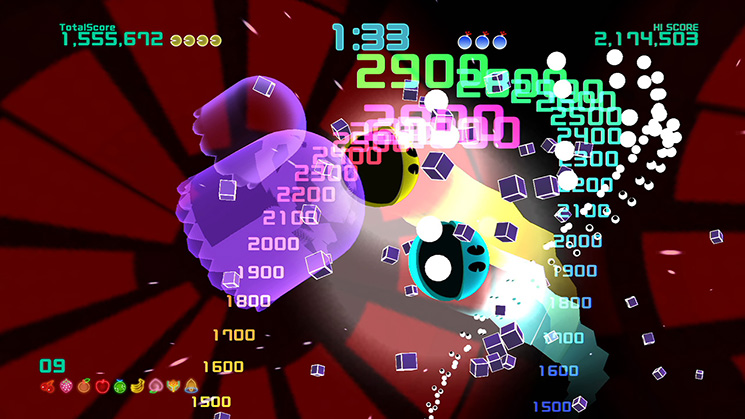 Shaking things up even more are the boss fights, where a giant ghost is attacking the maze from the background and making your normal objectives that much trickier. Building a collection of extra lives to then gobble the foe up as a cloud of multiple PAC-MANs (PAC-MEN?) is a real sight to behold and worth the effort. 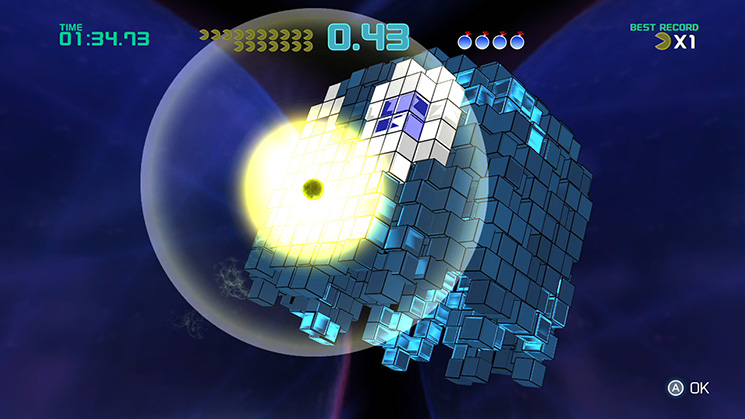 I haven’t given the full suite of modes a try yet, including the exclusive co-op multiplayer, but if my first impressions hold I’m going to love them. The game’s pulsating neon makes the entire package feel energized and fits the faster gameplay, and it might just be the most HD Rumblingest game I’ve played yet. It loses some of the simple charm of the original, but what it gains is hyperactive hunger and plenty of content for speed runners and high score heroes to wrap their heads around and snack on.

You can pick up PAC-MAN Championship Edition 2 Plus in the eShop now for $19.99.