Impressions – Mark of the Ninja: Remastered

Modern video games love stealth. It seems like a large chunk of single-player games that come out have some sort of stealth mechanics, from first-person shooters, like Wolfenstein, to hefty adventures like Spider-Man. Good stealth, however, is not as common. The aforementioned Spider-Man has relatively entertaining stealth sections, but they’re insultingly easy and simple.

No game has gotten stealth better, in my opinion, than 2012’s Mark of the Ninja. The indie game, from developer Klei Entertainment, is a straight up-and-down Stealth game with a capital S. I played the game back in 2013 and loved every minute of it, and with its Remastered release on Nintendo Switch, we have a chance to go back and relive all of the perfect, shadowy joy. While the “Remastered” part of the title doesn’t really add a whole lot to the experience, the original game is so good, you won’t even care.

Mark of the Ninja is a 2D stealth game, which is a relative rarity. The game, however, uses the different pros and cons of its dimensions to the very best of its abilities. Gameplay is broken up into several long chapters, with each of those broken up into different objectives marked on your map. The player, as the unnamed Ninja, climbs walls, scurries through vents, and dangles from ceilings going from point A to point B. On the way, the Ninja faces a variety of enemies, usually some sort of vaguely evil mercenary types, and can deal with them in a variety of ways. 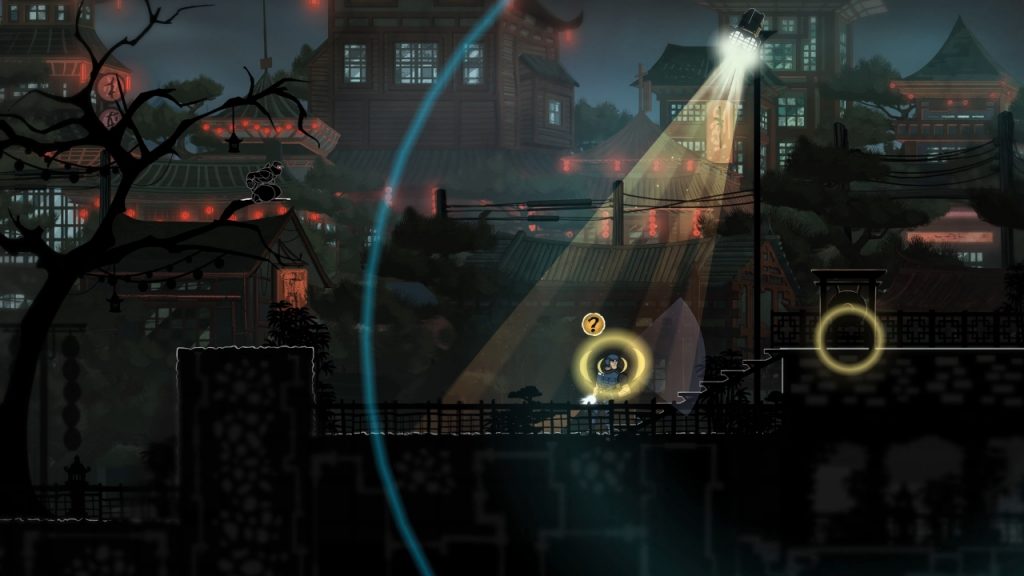 This is where Mark of the Ninja truly shines. Many AAA games in the past have touted PR nonsense like “you can play YOUR way!” — which usually boils down to you shooting a man loudly or shooting him quietly. Mark of the Ninja lets you play using a bevy of skills and tools to pick off enemies one by one, terrify them with traps and corpses, or ghost past them completely undetected. Each encounter usually has multiple routes, meaning there are a variety of ways for you to go around, under, or through enemies. You may come across a room that has some guards and a laser at the end of the area. You could skip the enemies and try and turn off the power. Or, if you can kill an enemy, you can drag their body and disable the laser. Levels are laced with interactables, like chandeliers, that you can use to kill or distract enemies. Every method of completing levels feels just as satisfying as the others, and I always find myself hitting “Reload Checkpoint” whenever I get spotted by a bad guy. Can’t let my perfect Ninja record be sullied!

The language of the gameplay is truly something to behold. There are no “stealth meters” or anything. As long as you aren’t in direct light, you’re kept hidden. You don’t make sound unless you run, use a grappling hook, or interact with enemies or the environment. Everything is presented very visually. Footsteps create rings that echo outwards, enemies that you can’t see through doors or floors can be tracked by their sounds, and simple icons detail who is aware of you and who is afraid of you. On top of this, the game’s A.I. is quite impressive. While still easily manipulated (it’s a video game, after all), there are no dumb “awareness meters” that fill up before an enemy sees you. If an enemy is looking for you and you don’t move, or you enter the light when an enemy is facing you, you’ll be seen. The game isn’t too hard, but it’s tricky to do perfectly, which is the true joy of each level. Bodies can be hidden, traps can be laid, and event chains can be set off to allow you to escape without a trace. 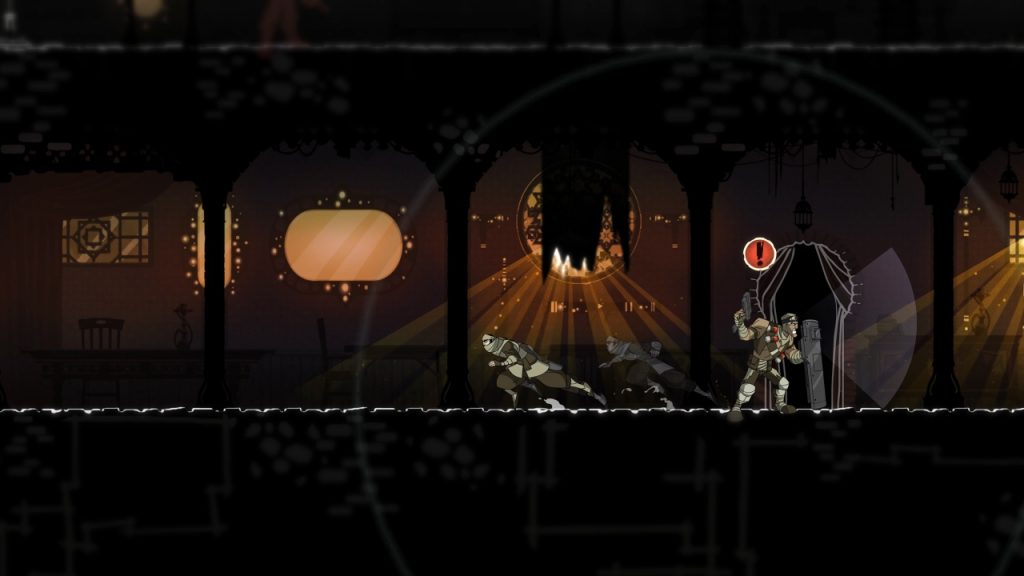 Controlling the Ninja feels amazing. Holding the stick in one direction makes him slowly (but not too slowly) and silently walk. Holding ZR lets you run, which causes noise. Almost every wall can be climbed, as well as many ceilings, and a grappling hook set to the R button lets you zip from point to point, while risking an enemy hearing you. You cannot fall off a ledge or wall without hitting a button, meaning it’s extremely hard to just accidentally fall into someone’s field of vision.

On top of this, the game’s art style helps with the fluid motion of the gameplay. The characters look like a strange cross between Samurai Jack, Penny Arcade, and an early 2000s comic book published by Valiant or Image Comics, but in-game, their silhouettes allow easy threat assessment on the fly. The animation is buttery smooth, and always makes the Ninja look good. The sound effects are nicely done, and, while the story is some nonsense about your ninja clan taking revenge against some vague European Spec-Ops baddies, it never gets in the way. The game simply lets you loose in these levels to wreak havoc.

Overall, the gameplay is just as tight and smooth as it was in 2012. The many methods of completing objectives and finding the numerous hidden secrets makes you truly feel like you are in control of the situation, no matter how outnumbered, but never invincible.

This particular port of Mark of the Ninja comes bearing a “Remastered” at the end of the title, though it’s not immediately noticeable in-game. This new package has new surround sound audio, some touched-up graphics, and includes the Dosan’s Tale DLC and developer commentary that was later added to the original game, but if you played the game to death back in the day, there might not be enough here that you’d consider new. The Dosan’s Tale DLC is nothing too different from the base game, but more Mark of the Ninja is always good. The improved animations are subtle, although I did notice the (brief) animated cutscenes look somewhat better than they did originally. 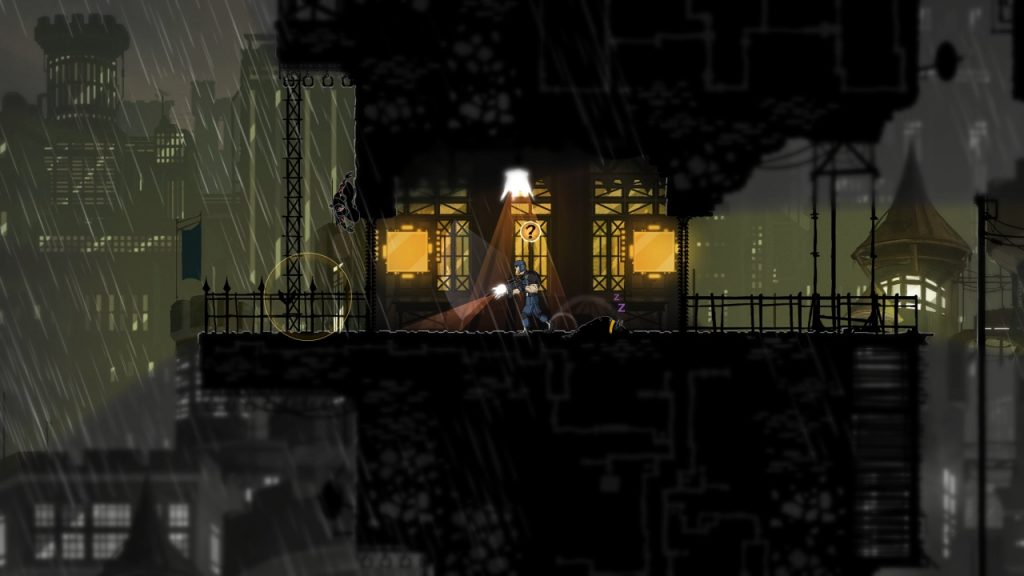 That doesn’t mean this game should be slept on, even if you have played it. Jumping back in, I was shocked at how incredibly well the gameplay holds up, and, if anything, it outshines attempts at stealth in 2018. Stealth games usually feel too simple or too complex, but Mark of the Ninja: Remastered strikes a breathtakingly beautiful balance between challenge and reward. Moving around the levels feels as good as a 2D game gets, and the lovely art and animations make it a gorgeous game on the Switch in both handheld mode and docked mode. If you’ve played Mark of the Ninja before, you may not find a whole lot here to offer, but it may be worth revisiting. If you’ve never played it before, sneak (don’t walk or run) to the Switch eShop to download Mark of the Ninja: Remastered to play the most fun take on stealthy ninja action ever created.