Impressions: Low-fi outlaws and guffaws in West of Loathing

Beauty is in the eye of the beholder, according to who I assume is some dead English person. The most illustrious, vivid polygons that a man or woman can craft can sometimes fall flat before doofy simplicity and charm — and if there was anything that embodied both of those traits, it’s Asymmetric Publication’s West of Loathing, a rootin-tootin western RPG where spectacle has been thrown out in favor of a tongue planted so far in the cheek, you just might swallow it laughing.

Parodying a whole hootenanny of tropes about cowboys, caravans, and cattle, West of Loathing has you create a character and get to “protagonistin’” your way across the Old West, as you round up dirty bandits, help the poor ol’ townsfolk with their qualms, and fight demonic bovines in the aftermath of a cryptic apocalyptic event known as “When the Cows Came Home.” And if that premise doesn’t sell you, I’m not sure what will. 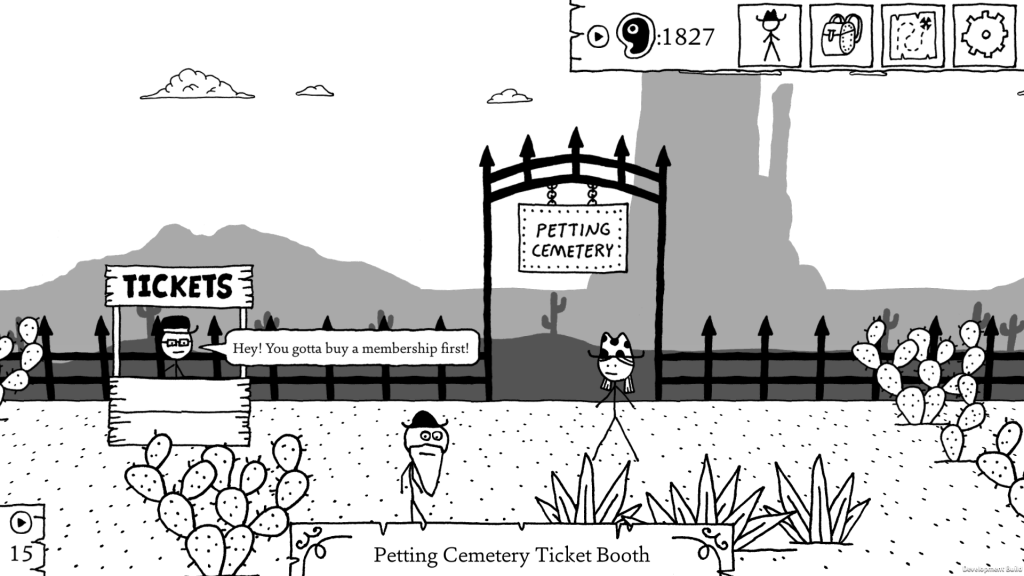 As you can tell by the screenshots, West of Loathing’s aesthetic is somewhere between “minimalistic” and “purposefully crappy.” Every character you run into is a crude stick figure, or an approximation thereof, and most monsters and environs are drawn with similar artistic proficiency. But the game clearly knows what it’s doing on all these fronts — the use of shadows and lighting is actually quite nice in caves, and despite repeated themes for areas (caves, graveyards, forts, mines, and other cliché western places), they all have distinct features to make them at least recognizable.

This sucky aesthetic would be just that if the rest of the game was of similar terribleness, but it manages to go above and beyond thanks to the game’s strongest hand: its hilarious writing. Characters’ problems and situations are absurd; from a half-man, half-cactus looking for a wife to a man whose jelly beans were stolen by goblins (who are everywhere, for some reason) to an excruciating display of bureaucracy in a literal ghost town, the adventure is wackier than a group of hippies doing an ’80s workout routine. Who are also in the game, by the by. 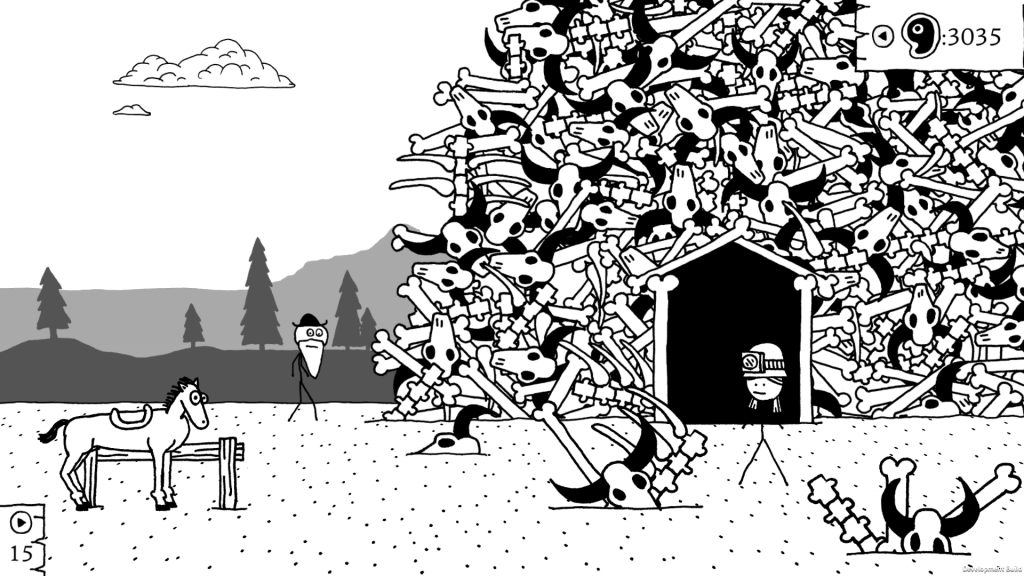 The language and wit on display are nothing short of masterful, either. I busted a gut laughing several times at the sheer density and cluelessness of the NPCs, and marveled at the buffoonery in the game’s very core systems (the class I chose at the start was “Cow-Puncher”). You harvest alcohol from cacti; every haystack you find contains a needle; the game’s currency is simply “Meat.” If you really want to see the writers’ skill on display, stick your hands into one of the Loathing’s many spittoons, and witness the depths of putrid imagery that the English language can convey. With its minimalist presentation, West of Loathing needed strong writing to soar, and soar it did.

In terms of game design, this gun-slinging good time is standard, but (mostly) well executed. After a brief tutorial segment where you do a few quick quests and pick a pardner, you head to the town of Dirtwater, from which you can begin setting out to a variety of locales. Every place has something to do in it, whether it be something simple like collecting treasure or completing a full-blown side quest. Random events happen as you travel as well, ranging from basic battles to hilarious asides, though as the game went further they began to feel more repetitive. 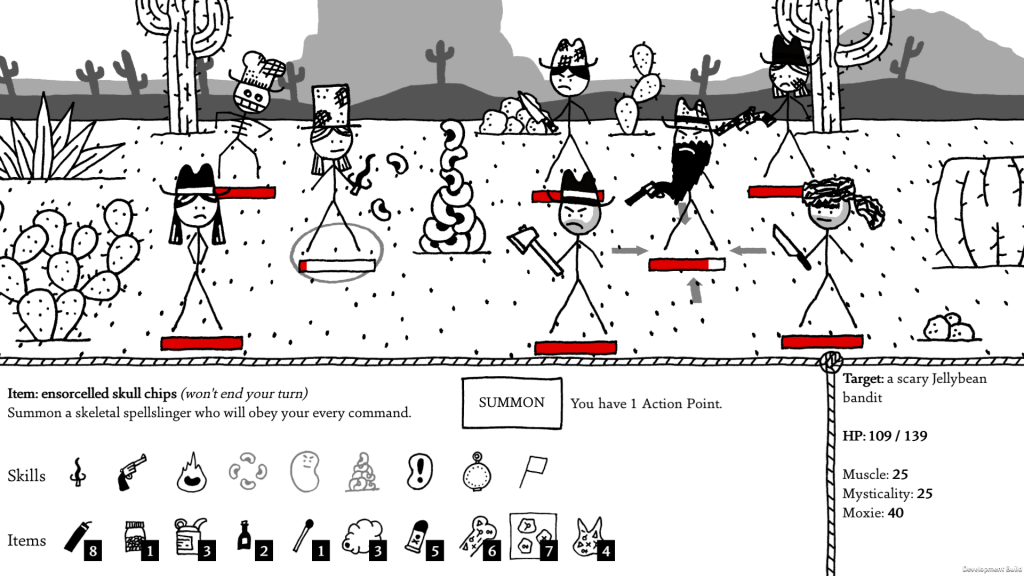 If there was one bigger complaint I’d make about West of Loathing as a whole, it probably would be the combat — it’s not terrible, but it’s a little too basic to be interesting. Fights consist of simple turn-based battles on a grid, where you and your pardner can take actions to attack, buff, heal, etc. Earlier on the fights are more interesting, but as the game progresses and your EXP skyrockets they become more lopsided, ending in one or two rounds as you either pummel your foes into oblivion or get massacred in response. While it was always fun to see my character (Cub Ferdinand, cactus cultivator extraordinaire) beat cows from hell to death with her bare hands, I do wish the fights had just a little more challenge or depth to them. Not the worst thing, but if you’re looking for gripping turn-based action, this won’t be where you find it.

West of Loathing is ultimately a game with a strong quirkiness and vibrancy that many lack in a day and age of cookie cutter stories. Despite some issues with the fights (and mild struggles with keeping track of certain things to do that aren’t technically side quests), I was laughing from beginning to end, and enjoyed every minute of this classically styled RPG. If you’re looking for a Switch game with a satirical bent, I don’t think you can find one better. I’d bet all my Meat on it.