During the September 2018 Direct, Square Enix went all out with the Switch announcements. While the confirmation that major mainline titles like Final Fantasy VII, IX, and XII would be heading to a Nintendo system for the first time was amazing, there were a couple of smaller games announced that deserved some attention, too. Chocobo’s Mystery Dungeon: Every Buddy! falls into that camp, and while it’s definitely not the bombshell those other titles are, it certainly shouldn’t be overlooked.

Every Buddy! is, at its core, a port of the 2007 Wii game Final Fantasy Fables: Chocobo’s Dungeon, but with some pretty major updates and changes. For one, the whole game is in HD, and while some of the animations can look a bit primitive, it really makes the environment pop, with the backdrop elements getting a much needed bump in saturation. 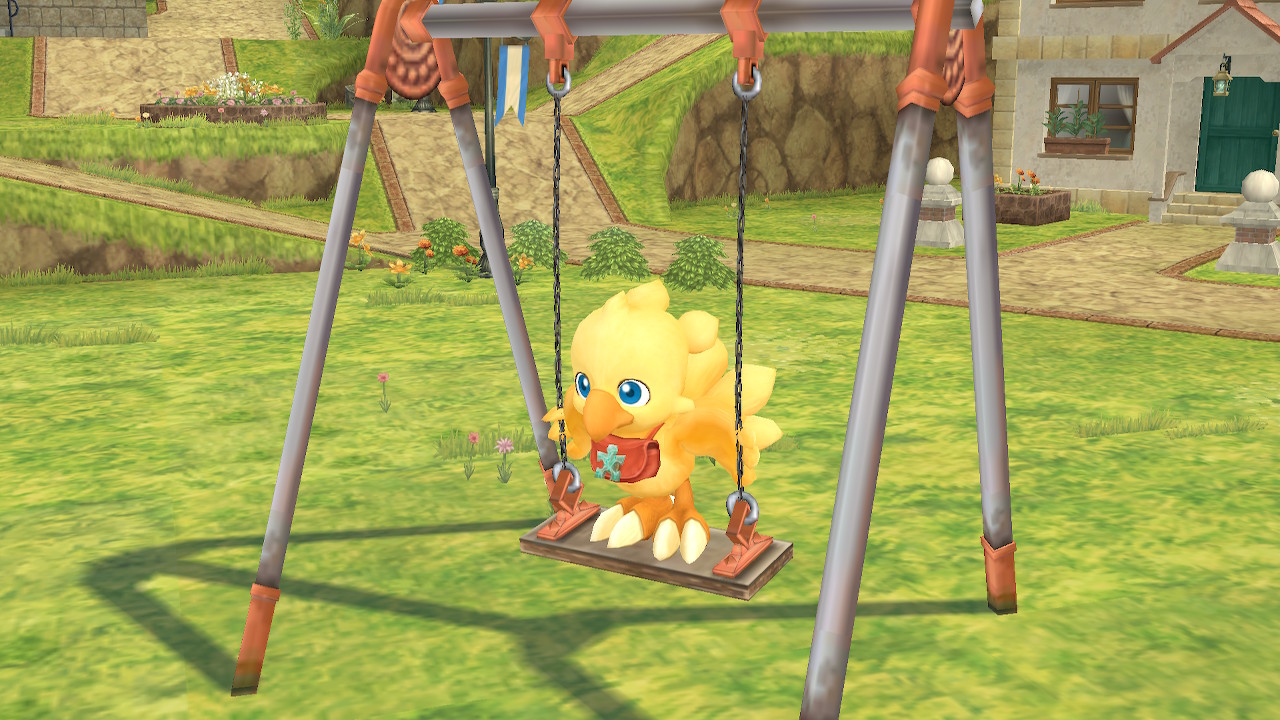 But, of course, the biggest changes come to the gameplay. As the title suggests, the game follows the “Mystery Dungeon” mold, which has been used by the likes of Pokémon and Dragon Quest before. As Chocobo enters memories (more on that later), they manifest as multi-floored, procedurally generated dungeons. Rooms are separated by long corridors, and there are plenty of traps and monsters making the journey to the next set of stairs more perilous.

Combat is a turn-based affair. Every step and attack you make causes the monsters on the floor to move around too, making exploration a methodical process. If you’re a fan of roguelikes you’ll be right at home here, as being defeated strips you of almost everything you own — though it’s thankfully not as merciless as it could be by default. When you start things up, you can choose from two difficulty modes. The normal difficulty is present and correct from the first game, where you keep the three equipped items upon death, but the new hard mode makes you lose everything. While that may seem like a small difference, this risk factor adds something a little extra: you can spend a lot of Gil upgrading your talons and saddles, so losing them would sting quite a bit. 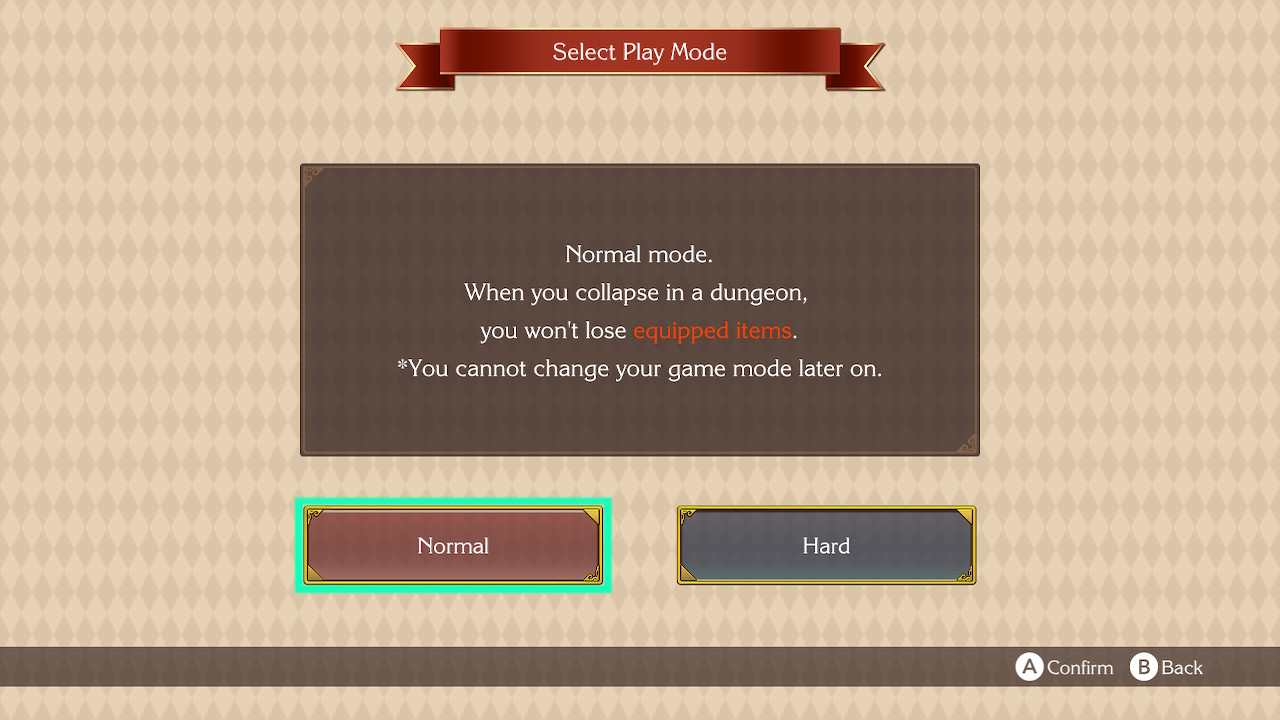 In the original game, Chocobo had to mostly go it alone, but this time around he has the titular buddies to help him out. When I went into the game I expected something akin to the Pokémon Mystery Dungeon games, where recruiting other Pokémon essentially relies on random luck after you best them, but I was pleasantly surprised during my adventure. When Chocobo defeats an enemy, they have a chance to drop Buddy Points (BP). When you collect enough of a monster’s BP, you unlock the ability to bring them along. This means you’re basically constantly unlocking buddies, including franchise favorites like the Cactuar and Tonberry.

These buddies make combat a lot more interesting, too. In the original, you were basically limited to Chocobo’s abilities. While he has various jobs that keep things interesting, including franchise staples, like the Black Mage, you’re locked into those jobs after you enter the dungeon proper. Buddies give you more options to offset it. Going in with a combat focus? Get a buddy with long-range abilities that can pick off your opponent from behind you in the narrow corridors. Want to magic it up? Instead go with one who is better at the close-range battles. In the original game I found myself getting frustrated by the sudden appearance of enemies who I just wasn’t equipped to deal with, but with buddies by my side I feel like I have a better chance more often than not. 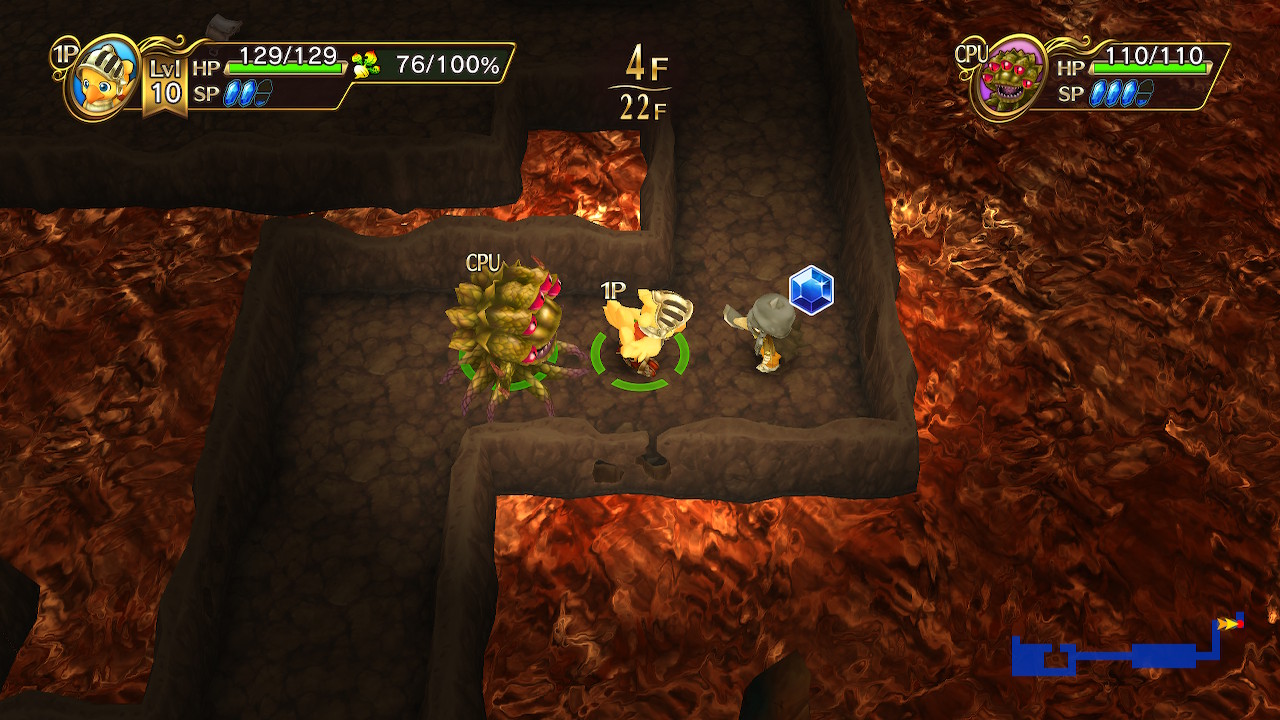 Now, about Chocobo entering memories. The main story of Chocobo’s Mystery Dungeon involves the titular Chocobo and his friend Cid (yes, he’s connected to airships) heading to a mysterious tower in the desert to find an ancient artifact. Soon enough, however, they’re flung into the town of Lostime, a place where a bell tolls and makes residents forget their memories. Early on, thanks to a mystical meteoric egg hatching into a green haired star baby (seriously), Chocobo gains the ability to enter these memories which take the form of the aforementioned mystery dungeons. By exploring them to the end, Chocobo can bring back the memories. 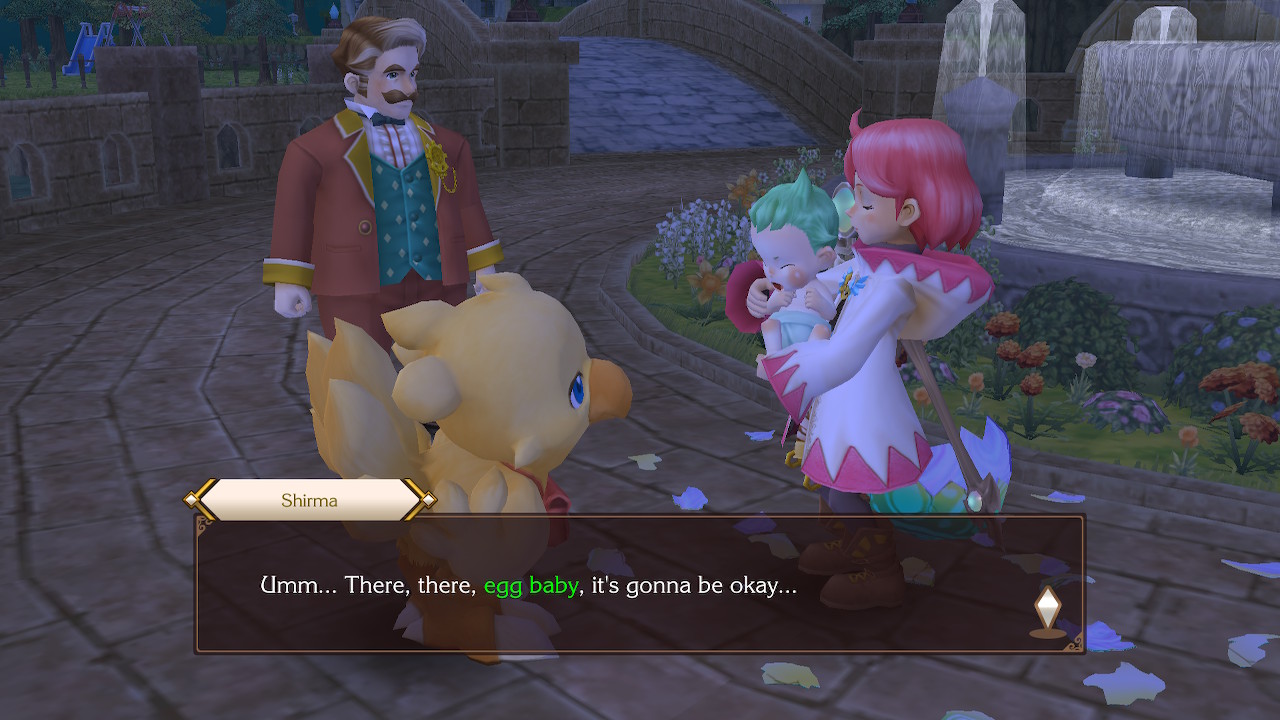 As Lostime is filled with residents, there are a lot of dungeons to explore, and many of them are classified as “Challenge Dungeons.” These often have certain requirements, like Chocobo can’t be above a certain level, can’t bring buddies, constantly has the Blind status effect, and more. They often have you stripped of all items, too, making the game even more of a roguelike as you have to pick up new equipment off the ground just for that dungeon. Thankfully, being defeated in a Challenge Dungeon doesn’t mean defeat in the usual sense — you don’t lose the items and Gil you had before entering, so you can try as many times as you want with no repercussions. Not only are these fun diversions from the more standard dungeons, but they’re worth doing; as not only does BP still drop, giving you plenty of new buddies, but you unlock more activities around the town and additional jobs.

These shops that open up give access to seeds that Chocobo can plant back at his homebase, new potions, and even fishing. Yes, like every JRPG-adjacent game released in the past two decades, there’s a fishing minigame, and it’s quite a cute and simple one. 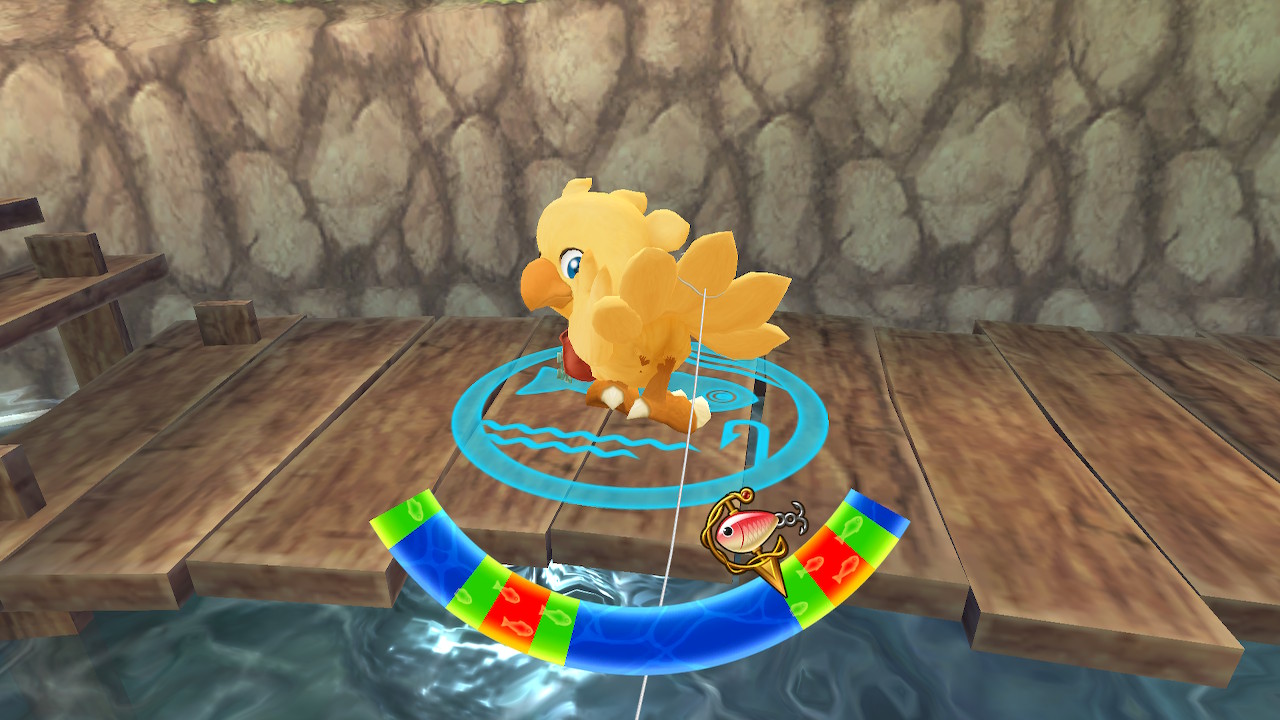 The fish you catch during this minigame can be sold — and also offered to a Fat Chocobo, who’ll then let you deposit more items and Gil in the local bank, so if you’re defeated in battle you can always have a handy cushion to fall back on.

Really, if you’re a fan of the Final Fantasy franchise, you owe it to yourself to play Mystery Dungeon. Plenty of familiar bestial faces show up, and there’s nothing quite like a Moogle superhero showing up to an amazing remix of Man with the Machine Gun from Final Fantasy VIII to brighten up your day.

It’s worth noting that there is a rather bizarre change on the music front, though. The original, gorgeous orchestrated main theme is replaced with something a lot more bombastic, which, while fine for the new colorful title screen, also replaces the vocal theme that comprised the game’s opening. I can only assume Square Enix lost the licensing for the track, but it’s a shame to see such a beautiful opening moment cut. 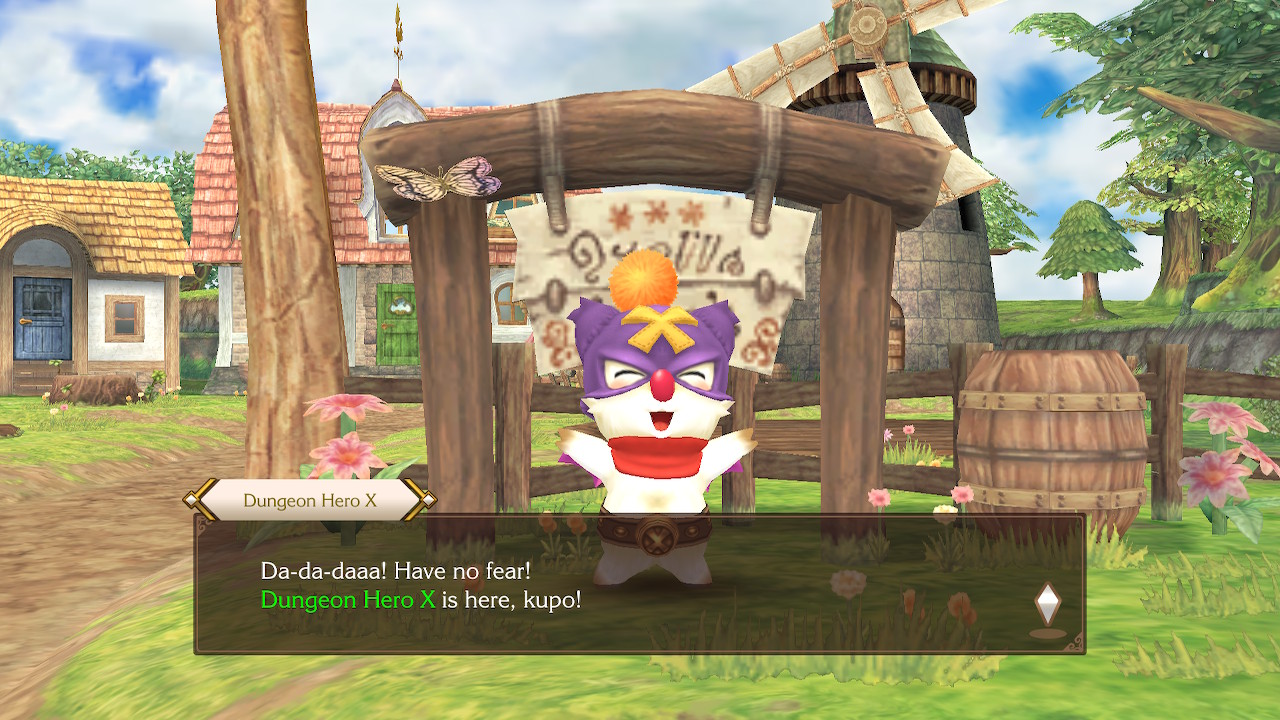 From my time with the game so far, I’m surprised by just how well Chocobo’s Mystery Dungeon holds up in terms of gameplay, and it’s almost funny to see how many elements it shares with the modern resurgence of the roguelike genre. Needless to say, if you’re a fan of randomly generated dungeons, or simply want to revel in some cuteness, you should join Final Fantasy fanatics in checking out Chocobo’s Mystery Dungeon. You might be surprised!