The Switch is perfect for games that can be picked up and put down in short bursts — games with quick levels or gameplay that won’t suffer from being interrupted halfway through, and games with quirks that will bring you back to them for another shot whenever you get a short chance to pull out your Switch. Bomb Chicken has all of these things, and is absolutely perfect for pick-up-and-play gameplay.

The game starts with a simple chicken egg that becomes drenched in a mysterious blue sauce, growing the eggs to a massive size. Once it breaks open, the chicken that hatches from it is massive as well, and has the unique ability to lay an infinite number of bombs, rather than eggs. The gameplay that follows is simple but slightly insane. The Bomb Chicken cannot jump; instead it must lay the bombs below itself in order to raise up above enemies and over obstacles. It’s a fun gimmick overall and makes the puzzles in Bomb Chicken rather unique for a puzzle platformer. Over the course of the game’s 29 levels I definitely had to scratch my head to work out exactly how I was supposed to use my bombs to hit switches, kill enemies, and protect myself from hazards, often all at the same time. 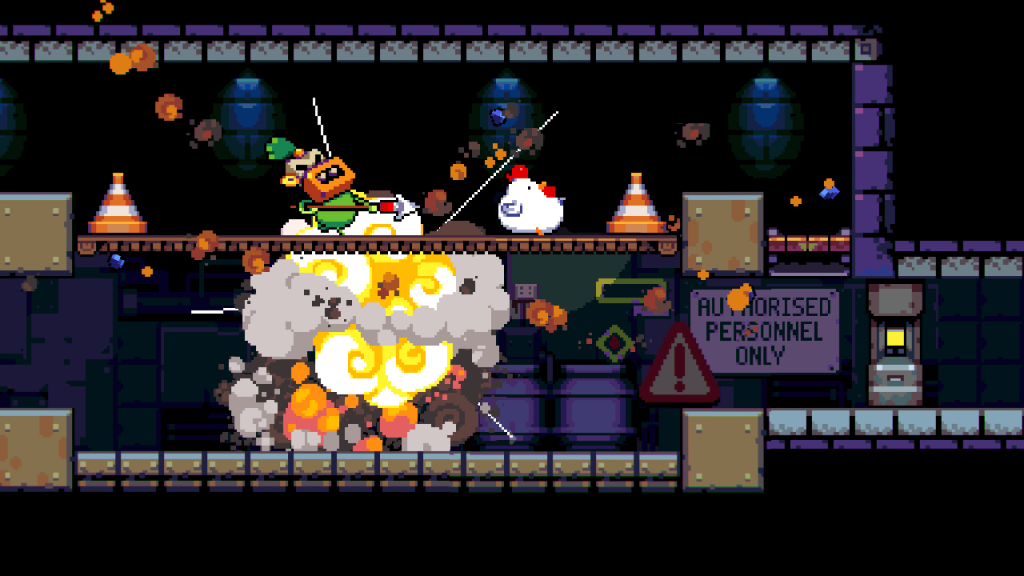 Bomb Chicken is rather short on story, but there’s some mysterious lore surrounding the company that created the bomb chicken, BFC, an obvious nod to fast food giant KFC. What little story there is not only alludes to BFC’s mistreatment of the chickens and the secrets of the company’s strange blue hot sauce, but there are also statues of some sort of chicken god in between each level that speaks to the bomb chicken, giving cryptic messages about BFC and the livelihood of the chickens.

Bomb Chicken may only have 29 levels, and some felt rather short, but it honestly didn’t make the game feel too underwhelming. More worlds would have been nice, but it kept the game feeling light and I felt like I could dive back in between sessions of other games during a quick car ride. The levels are short, but with the difficulty curve, the game lasted me what felt like an appropriate amount of time. They’re split up across three worlds, which are somewhat visually distinctive, though more could have been done to make each world stand out more from the others. The visuals of the game are striking though, with the pixel art beautifully made, and the animations are fun and lively, making me eager to jump back into the game each time I stepped away.

The music isn’t extremely memorable, and is rather subdued, but on the plus side it actually contrasts very well with the striking squawk that the chicken lets out when struck by an enemy or its own bomb, which always made me (and the others around me) giggle, taking the edge off of a death at the hands of an intricate puzzle. 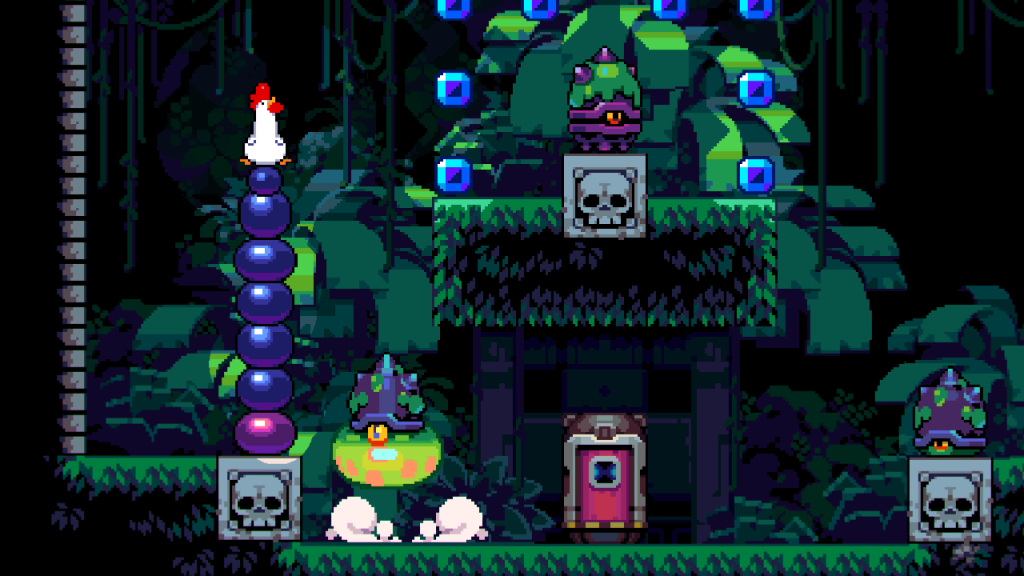 Overall, I found Bomb Chicken entertaining, though I have to classify it as a quick and fun “pick up and play” experience for those looking to kill some time between other games more than anything else. The game’s quirks and beautiful art make it stand out, and the puzzling left me feeling satisfied, but I can tell that someone looking for an entire platformer experience may feel hungry for more once they reach the end.