When you start playing a Japanese RPG you don’t usually expect something calming – typically there are burning villages, amnesiac heroes and world-ending prophecies within the first hour. Gust’s Atelier series has long worked against those assumptions, delivering an experience quite unlike any other JRPG out there.

The aim? Building up a humble atelier of alchemy, bubbling together ingredients in a cauldron to create concoctions for prospective customers or to take into battle. The latest entry, Atelier Lydie & Suelle: The Alchemists and the Mysterious Paintings, doesn’t do much to change this formula, but it’s the series’ return to a Nintendo system after nine years of waiting since the last Japan-exclusive DS installment. After a few hours of play, we’ve got some impressions…

As I mentioned earlier, Atelier typically pushes aside the dramatic introductions most JRPGs offer in favor of something more subdued. This time it follows the twin sisters of the title, Lydie and Sue, who run their own ramshackle atelier in the capital city without much guidance – lazily heading into the woods to collect the bare minimum of ingredients to make the simplest recipes. It’s only after they stumble upon a magical realm inside a painting that they discover their potential and set about fulfilling their dream of creating the greatest atelier.

Yet, while the game does open up after about an hour of play, it still wrenches control away from you to introduce many, many characters who each offer their own lessons or shops, several of whom return from prior games in the series. Personally I didn’t mind this too much – it only contributes to the laid back charm that’s firmly established early on – but some may think it drags and keeps the player from exploring the world. 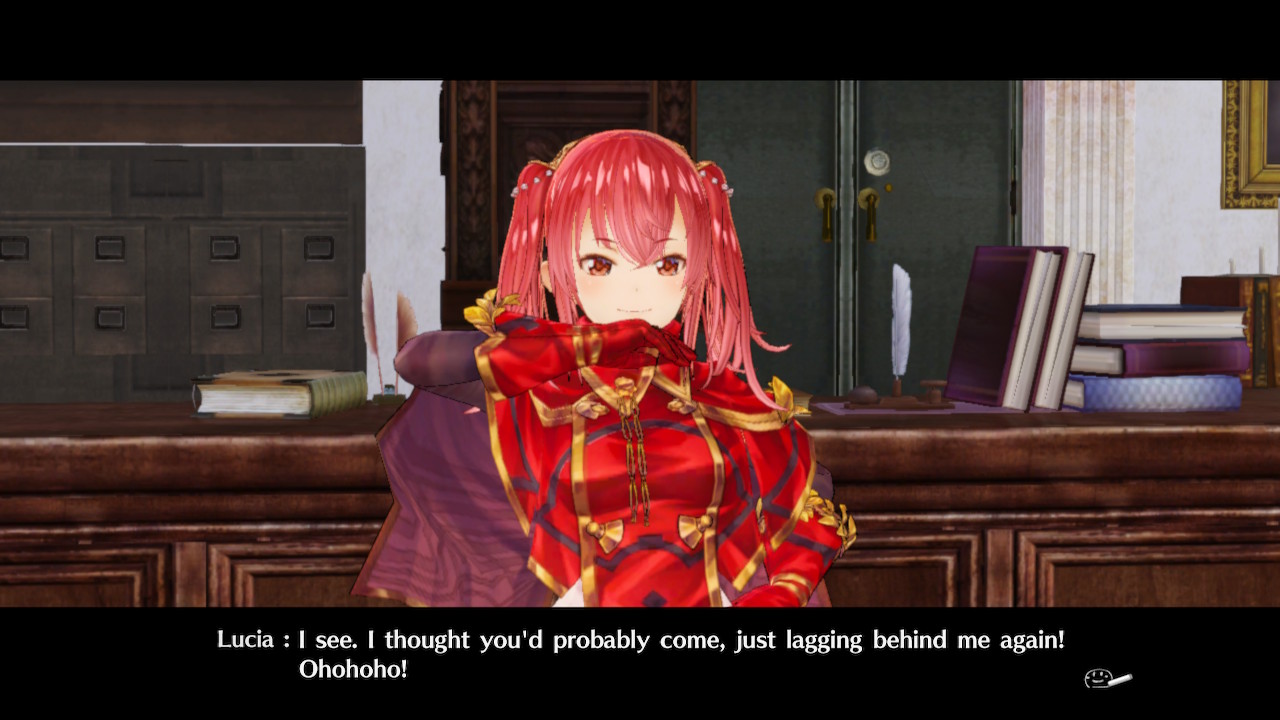 The characters themselves are at least well-written for the most part, with the occasional funny skit managing to land despite the game’s relatively limited animations, and they’re rarely as anime trope-laden as their appearances may suggest. It’s also worth noting that there’s little in the way of “bad” characters – even the girl who is ostensibly your biggest rival is a childhood friend who is treated more like comic relief than anything else, which is actually somewhat refreshing if you’re coming off the hyperbolic antagonist speeches of, say, Xenoblade Chronicles 2.

When you do get the ability to venture out into the world it’s meant more as a gathering exercise rather than a typical exploratory adventure. You select your destination via a world map and poke around a relatively small area, picking flowers, drawing water from wells, and occasionally kicking rocks and trees. That’s right, to get ore when playing as Suelle you deliver rapid kick combos that break rocks into finely cut gems. It’s probably the game’s best feature.

You’ll also encounter several monsters and engage them in turn-based combat, usually with the goal of getting their unique items for alchemy. While on the surface it’s very standard with attacking and skill casting options, the crafting you do back at the atelier plays a significant role. You can put together bombs and other weaponry for use in these bouts, often delivering far more damage than the standard “Attack” option, and you can imbue them with additional factors like status ailments to make them sting even more. 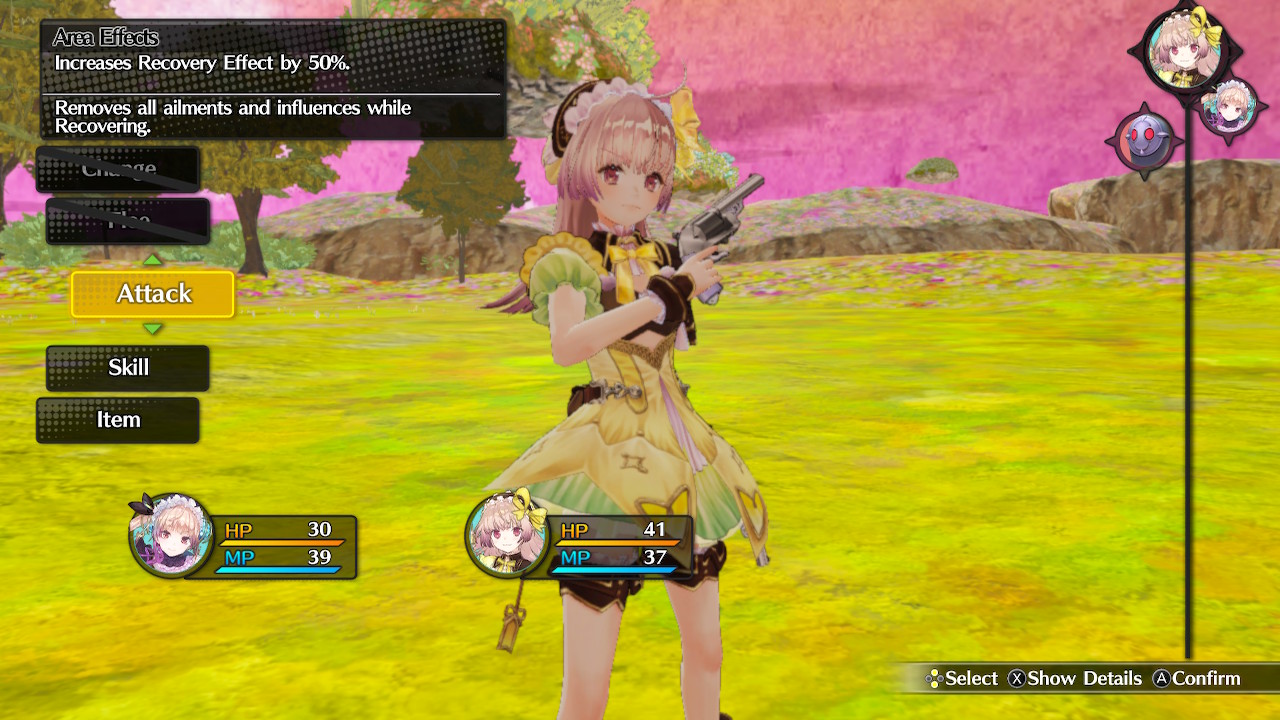 It’s not a surprise given the title but most everything in the game revolves around the atelier and the alchemy there-in. You can only collect a limited number of items during your excursions so you have to head back and regularly to drop off the goods, which in turn gives you the opportunity to craft even more tools to take next time.

But is alchemy fun? At first it seems incredibly basic – select three items, the in-game clock zooms forward a few hours, and you get a finished product. It isn’t until you meet a teacher that the girls unlock the more puzzle-oriented synthesis board, where each ingredient is given colored Tetris-style blocks that need to be strategically placed to unlock the additional skills, like the aforementioned status ailments. Like with battles, this lets the player have control over the systems at play and it’s something that only gets more involved as the game progresses. 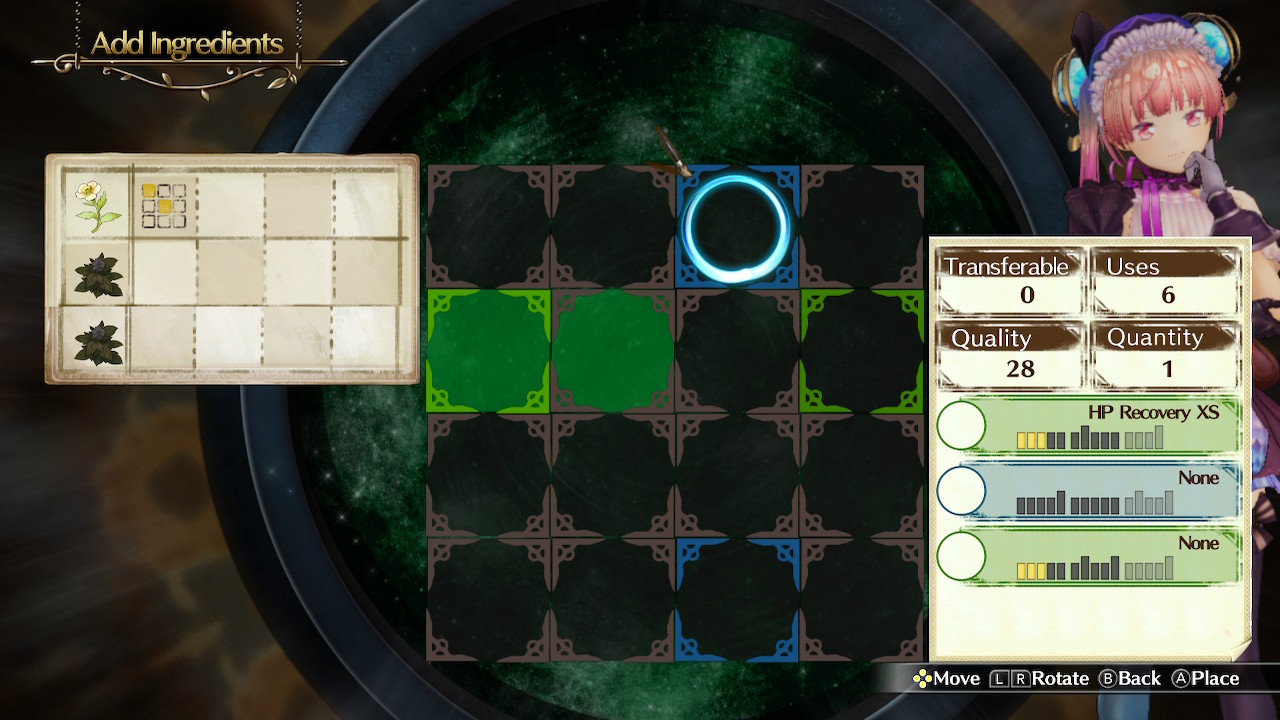 With the pick-up-and-play nature of Atelier’s item gathering and the short quest goals, it’s the perfect fit for Nintendo’s Switch, and thankfully the performance holds up pretty well on the platform. While clearly down-scaled compared to the PS4 games in the series, the watercolor aesthetic helps the game maintain its identity, while the frame rate remains steady except for certain rough patches. 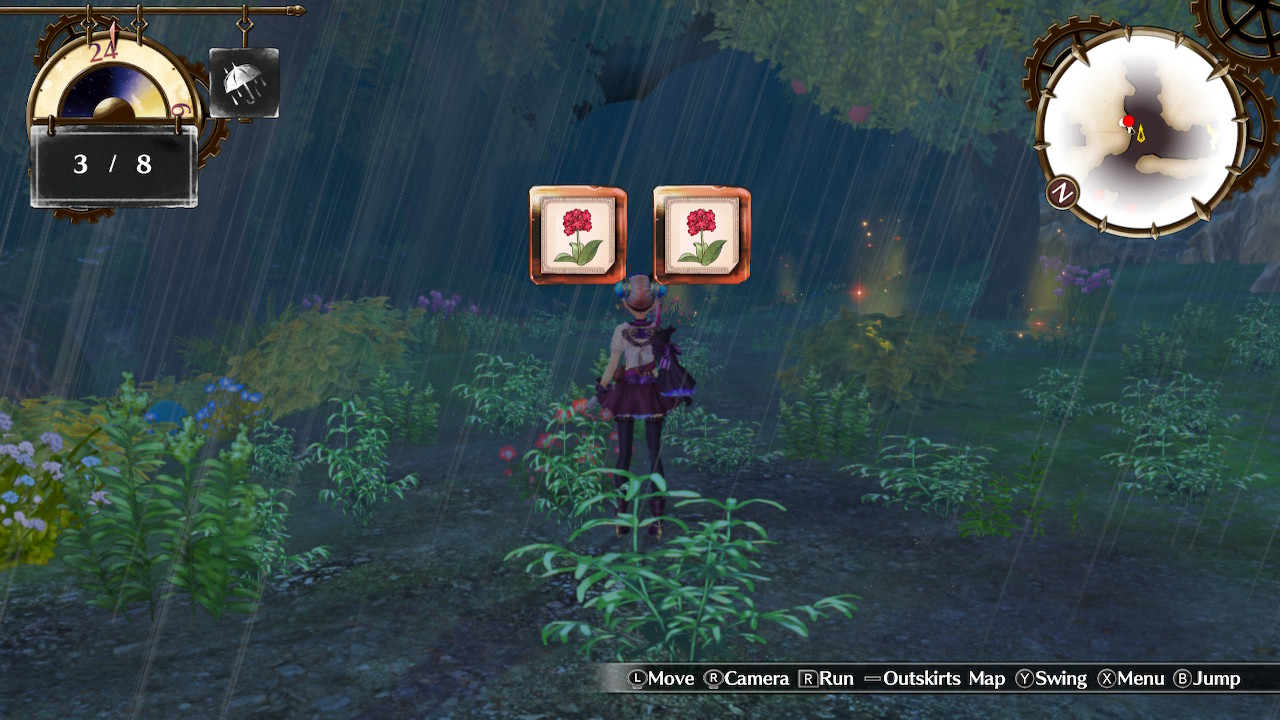 Unfortunately the game does suffer from an issue where playtime racks up even if you put the game into rest mode, resulting in massively inflated hours which put a dampener on the ease of accessibility somewhat for those who are bothered by the inaccurate counter.

If you only want excitement and intrigue from your JRPGs then Atelier isn’t for you, but if you’re in the market for something more subdued and charming then it’s definitely worth giving this latest entry a try. Just remember not to underestimate the seemingly benign Puni slimes!