Last week, we covered Cranky Kong, and this week, we’ll be talking about Super Smash Bros., in part because of the intense EVO Championships last weekend. When it comes to original characters from the franchise, there aren’t a ton to choose from, but it’s also easy to pick out the most iconic of the bunch – Master Hand.

The only original Smash character that’s appeared in all four installments of the illustrious fighting game franchise, Master Hand is always the boss waiting at the end of 1P/Classic mode, cackling with malevolence as your Nintendo character of choice gets ready to lay the smackdown on him. His relative enigmaticness and mystique in the middle of a wide cast of well known characters has driven fan theories for many years, and that’s what we’re here to discuss today. Who is Master Hand? What does he represent?

The answer is, perhaps, less definitive than we would hope.

64: Biting the hand that feeds

Master Hand is actually the first character seen in game, appearing in the intro and moving the character dolls around before giving a “3, 2, 1” prompt to kick off the action. Given how he arranges the scene and the characters, it would appear that MH is the puppet master of the spectacle – controlling the characters’ actions in much the same way a kid playing with his action figures would. 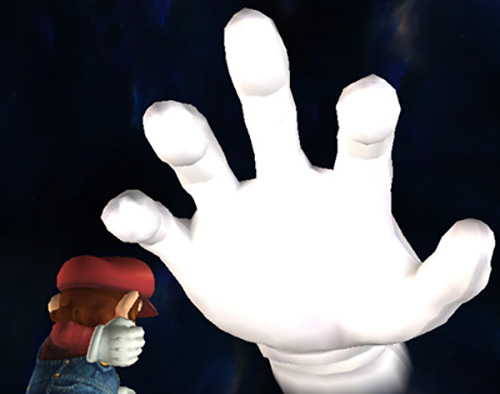 This forms the common consensus around Master Hand’s character – that he represents the imaginative hand of a child with his toys, bringing the world to life around him. What kid didn’t think about who would win in a fight between Mario and Link, or DK and Pikachu? These sort of “who would win” arguments continue to rage to this day on the internet, and Master Hand provides a framing device for the game’s universe to work off of. Simple and effective.

But the interesting part comes when you actually have to fight Master Hand at the end of 1P Mode. After maniacal laughter, one of 12 Nintendo characters takes on Master Hand once and for all, and upon victory falls limp as a doll once more. It’s an interesting fight to deconstruct – one of Master Hand’s playthings fighting against his/her lord in a bid for… what, exactly? Autonomy? Freedom? Release? It honestly depends on how you read it, and how dark you think it is. Is it a chance for the character to be free from endless fights, at last content to live in quiet stillness? An attempt to free themselves from the oppressive control of Master Hand? Or something else entirely? It’s quite open to interpretation, which is what makes it fun to speculate about. 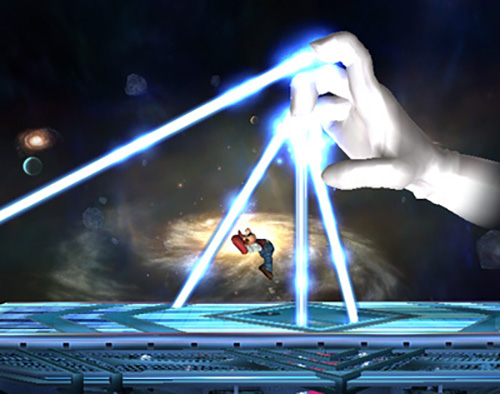 However, this relative simplicity would not last.

A couple of notable things changed in the mythos of Melee – the dolls were changed to trophies, more single player modes were added, and so forth… but the most important aspect that relates to Master Hand (from a non-gameplay perspective) is his lefty counterpart, the twisted Crazy Hand.

While Master Hand is relatively pointed and efficient in his movements and fighting style, Crazy Hand is… spastic, to say the least. Every inch of the glove convulses and twitches with what appears to be raw power. He’s notably more dangerous than Master Hand, if only because of his unpredictability. And when the two combine their powers, you’re going to have a tough fight on your hands. While not the hardest single-player challenge the game has to offer (that honor probably lies with Giga Bowser), it’s not an easy battle. But what does Crazy Hand represent in the mythos? 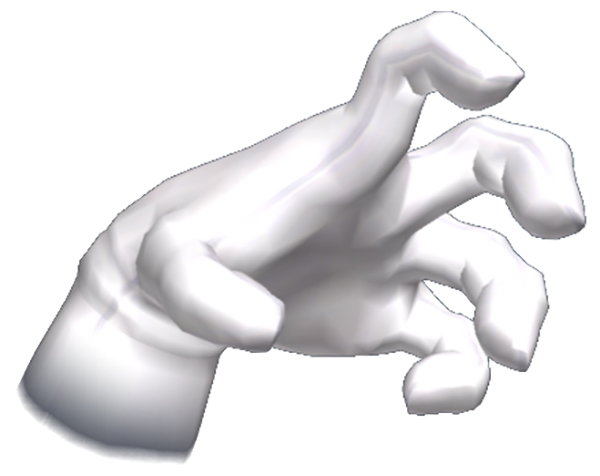 Well, assuming the Master Hand plays the same role that he does in 64 – which is admittedly a somewhat shaky assumption – it can be argued that Crazy Hand plays a reciprocal role to his counterpart. Master Hand is a force of manipulation and creation, bringing objects to life so that they may interact with the worlds he created. Crazy Hand, on the other… foot, appears to be a pure form of chaos and destruction, barely able to contain his power. This is further supported by which side each hand is – in olden cultures, the left hand was often thought of as disadvantageous or even evil (the word ‘sinister’ comes from an Old English term for “of the left hand or side”).

That said, Melee clearly put less thought into the framing device and lore than its predecessors – unless Sakurai is a more attentive and caring director towards those matters than previously thought.

Brawl is, at this point, the only game in the series with a proper story mode, which leaves a bit more character to dig into for most characters. Master Hand remains much the same, appearing to be the final boss conspiring against the heroes, giving orders to Ganondorf and co., and just generally being his villainous self. What complicates matters is the twist that MH is not in control of his actions – he’s instead being controlled by a strange, blue, Tron-esque creature known as Tabuu.

Of all the characters in Smash Bros. lore (which is rather vague in practice), Tabuu is the most difficult to figure out. Does he represent anything? Well… let’s see. The big focus of his character seems to be drawing multiple worlds into subspace to form a giant maze, and then… well, his motivations aren’t super well established, and none of it makes a ton of sense, and it all just seems like an excuse for –

Wait a moment. Tabuu is an allegory for crossovers themselves! Pulling certain iconic elements from multiple worlds together just to see what would happen in a poorly explained manner that you don’t have to think about too hard to enjoy! When put in that perspective, his control of Master Hand makes a little more sense – the desire/need for a crisis crossover event causes Master Hand to order the villains to do things, generating conflict which then creates a story around that conflict. It all makes sense now!

… What’s that? Reading too deep into it? Well, it’s not the most elaborate or sensical theory, but hey, sometimes you have to work with what you have. It’s still more comprehensible than the ending of Metal Gear Solid 2, at least.

The fourth installment ditched story, bringing back normal Master Hand shenanigans at the end of Classic Mode. But when you fight him and Crazy Hand at higher difficulty levels, the two fall early… and instead turn into the swirling black abomination known as Master Core. 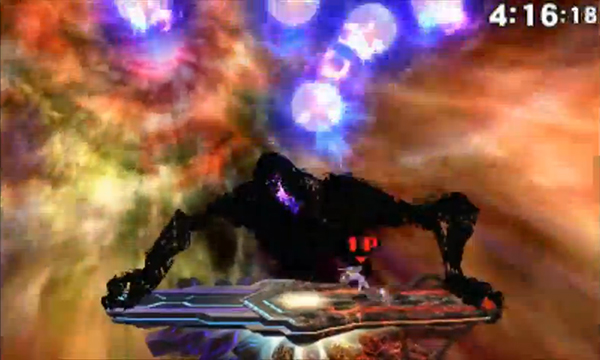 Master Core takes on a variety of forms, from a beast to a clone to even a gigantic fortress, before finally revealing its true self… a Smash Ball? Well, sorta. It is in fact a giant multicolored orb adorned with the Smash series logo that you have to beat up a lot before it does anything, but defeating Master Core doesn’t give you a Final Smash; it only results in your victory and the end of Classic Mode. Cue the credits. But what does it mean?

Well… what lies at the core of Master Hand? Continuing the strain of thought from 64, it would be creation – the force of creating something in the world. And what is the original source of creation within the confines of Smash as a whole? The developers. That’s right, the Core represents the developers of Smash themselves, from Sakurai right through to the bottom of the “special thanks” section of the credits. The multitude of forms represents the multitude of talent working behind the scenes working together to form a cohesive product. Beating Master Core, particularly on the hardest difficulty, means you’ve bested the hardest of challenges the developers could throw your way, and you’ve accomplished all you could within the game. Well, besides all the challenges.

Master Hand. A being of creation, opposed by destruction, controlled by the need for crossovers, and fueled by developers. It sounds a bit strange when put into a single sentence like that, but for a creature with no dialogue and only the lightest of lore surrounding him, there’s a surprising amount that can be gleaned from him.

Now, I can hear some of you say that we’re stretching our theories a little thin here… and you’re absolutely correct. This is all really just fun speculation. Every game, with maybe the exception of 64, doesn’t really have too much in the way of concrete evidence to back these assertions. But what’s the point of doing critical character analysis if you can’t have a little bit of fun once in a while, eh? You’re free to agree or disagree with any of these theories, but don’t get too steamed about it, alright?

Thanks for reading this week’s edition of the Character Column! Tune in next time, where we talk about the greatest character Nintendo has ever produced, so iconic he can be brought to mind with a single sound – WAH. Until then!