Character Column: Issun is the true hero of Ōkami’s journey

Welcome to the Character Column! Each week, I’ll be taking a look at a different character from Nintendo’s long and esteemed history, and I’ll analyze what makes them interesting, nuanced, or just plain memorable. Whether they’re heroes, villains or NPCs, I’ll explain why they deserve respect or love from the fanbase and a place in video game history. Our latest entry was on Miles Edgeworth, the pragmatic prosecutor.

This week, we’ll be talking about one of my favorite games of all time: Ōkami. The game celebrates the 10th anniversary of its North American release this Monday, and what better way to celebrate than to talk about one of the game’s many illustrious characters? It was actually rather difficult to decide on just one person (the game is chock full of good characters), but in the end, I settled on perhaps the finest of the bunch: the wandering artist known as Issun. 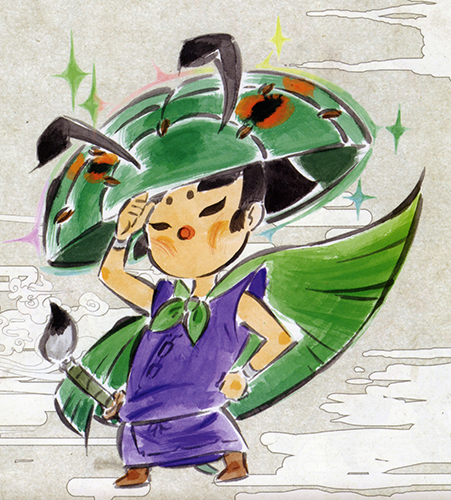 At a glance, Issun appears to be Ōkami’s version of the Navi-esque character common to Zelda titles – guiding the silent Amaterasu on her journey with exposition, dialogue and hints. But unlike Navi and more like other Zelda companions, Issun is eventually revealed to have a notable past and personality behind him, one that makes him stand out against the grain.

Ōkami spoilers ahead! Read at your own risk!

First, however, I’d like to talk about Issun’s mythological origins. Like almost everything in Ōkami, Issun is based off of an old Japanese tale – the story of Issun-bōshi (roughly “One-Inch Boy,” originally “One-Sun Boy,” which is a minor pun in-game due to his association with sun goddess Amaterasu). The tale goes like this…

Once, there was an elderly couple who wished for a child, despite their age. They prayed for one “no matter how small,” and thusly gave birth… but the child was tiny, no bigger than a fingertip. Named Issun-bōshi (Issun being a length of approximately three centimeters, and bōshi meaning “son”), the boy eventually grew up and began traveling the world as a little samurai, with a sewing needle for a sword.

He comes upon a city, wherein he petitions a job with an affluent daimyo and his princess daughter. While scorned for his size, he successfully joins the princess as a companion. The two then encounter an oni, who swallows Issun-bōshi whole. The samurai then attacks the demon from the inside with his trusty needle blade, and the oni spits him out and flees. While running away, he drops the magical hammer known as Uchide no Kozuchi (Uchide’s Mallet). As a measure of gratitude, the princess uses the mallet to grow Issun-bōshi to full size. The two remain together and eventually marry. 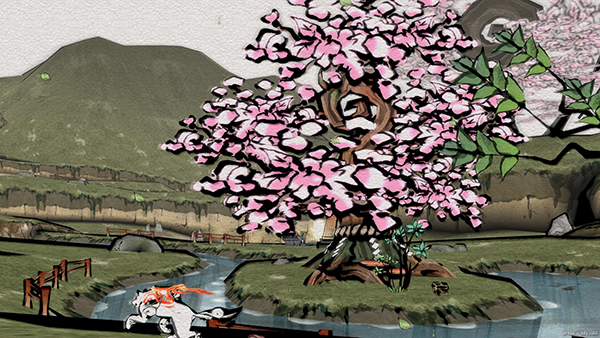 There are many variations of this story, some of which provide different explanations for Issun’s character within Ōkami. Some versions have Issun-bōshi as a more lecherous fellow who squabbles with women and the princess, which is likely where Issun’s more perverted character traits come from. Other variations depict Issun-bōshi as more hasty and impatient, which is likely where Issun’s hurried nature comes into play. Regardless, Ōkami does not confine its version of Japanese mythology to the stories as a whole, so the story of Issun-bōshi is more of an inspiration than a comparison.

Issun is introduced as an irate, rather lewd bug – er, “wandering artist” – just a few minutes into Ōkami’s story. The world is hosed, and it’s up to Amaterasu to fix it, so the wood sprite Sakuya sends Issun along as a companion (not unlike his role in the original fable, though there are zero romantic implications this time). Issun begins by boasting of his skills with the Celestial Brush, demonstrating his power of Restoration early on, but it takes almost no time for Amaterasu to succeed his skills in inking reality. Realizing just how powerful the she-wolf is, Issun claims that he’ll journey with her just to ape her Celestial Brush skills, and thus his role in the adventure is established. 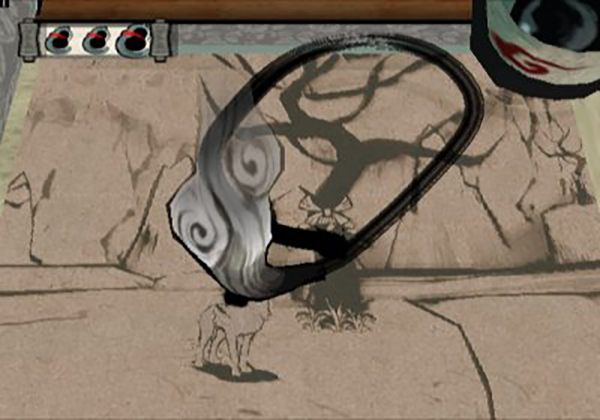 At a glance, Issun may seem somewhat unlikeable, but he grows on both Ammy and the player quickly. He’s never too full of expository dialogue, and instead has a good supply of snide comments for the various wacky situations, including a healthy amount of nicknames (“half-baked prophet” for Waka being my favorite). He also has a surprisingly entertaining rapport with Amaterasu, despite the fact that the latter is a silent protagonist. He’s around to get Ammy on track whenever she has one of her more eccentric or playful moments, and she’s apt to tilt her head in quizzicalness whenever Issun succumbs to bouts of perversion. The two are great partners in every sense of the word.

Even so, Issun is fairly static for the first half of the journey – entertaining, to be sure, but not much is known about him. However, the truth eventually reveals itself…

In a somewhat fitting manner, Amaterasu doesn’t learn the truth of Issun’s identity until she uses Uchide’s Mallet (called the Lucky Mallet in-game) to shrink down to size. There, she learns that Issun is, in fact, not a bug, but rather a tiny creature known as a Poncle (in Japanese, Koropokkur) whose armor only made him look like a bug. It turns out that Issun’s claims of being a great artist and warrior are well founded, as he does quite the number on enemies that are his size. But this only raises further questions about Issun’s past. Who is he? Where did he come from? 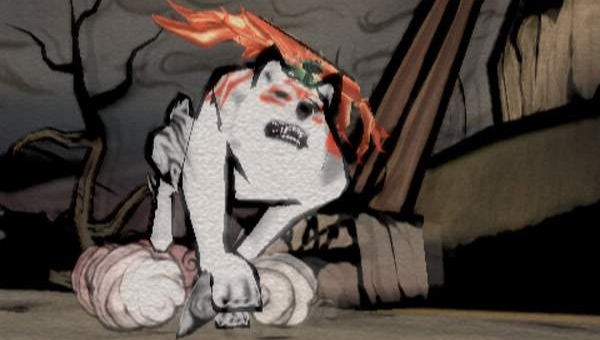 The answer doesn’t come until near the end of the game, where Ammy finds the tiny village of Ponc’tan deep within the forest of Yoshpet, only to discover that Issun wants nothing to do with the place. It turns out that the village is where he hails from, and that his grandfather, Ishaku, who traveled with Amaterasu as Celestial Envoy a hundred years ago, lives there still. As the player wonders why Issun refuses to see his home, a friend of his, Miya, comes out and asks him why he won’t enter. Miya worries that Issun has abandoned his role as new Celestial Envoy, to which he refuses to answer. Despite the fact that everyone in the village believes in him, Issun leaves with Ammy, refusing to talk about the subject at more length.

The game is somewhat cryptic about why Issun refuses to become Celestial Envoy. The reason seems to stem from two different emotions – the desire to live his own life free of worry, and the fear that he would be unable to match up to lofty expectations. In any case, it all comes to a climax when Amaterasu finds the Ark of Yamato, a way back to the Celestial Realm… and Issun declines to come along. He’s seen all of her Celestial Brush techniques and is confident he can master them on his own. That’s why he set out on this journey in the first place, right? But despite how reluctant he seems to be, and how desperately Amaterasu pushes him to come along, Issun doesn’t budge…

That’s when Waka appears. He reveals that Issun couldn’t enter the ark even if he wanted to – only those with faith in the future who don’t flee from their fate may enter, and Issun, who ran from his duty as Celestial Envoy, is unqualified. Angry that he would be denied something, Issun tries to enter, but is blown back and ends up in the lake below. Amaterasu looks on sadly as she enters the ark, and Issun swims back to shore… 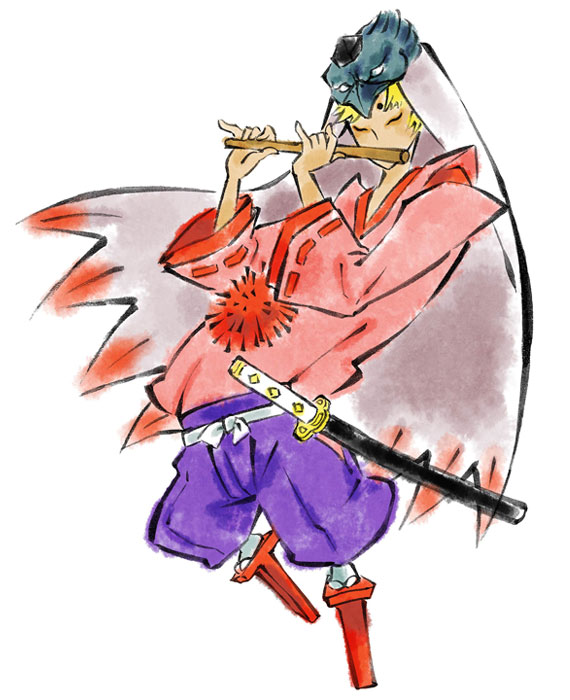 Amaterasu now stands in the ark, alone. She fights old foes one last time in solitude before ascending to her final battle against the Dark Lord Yami. After a long, grueling fight that makes it seem as if all hope is lost and that the world will be drowned in darkness… she suddenly feels a surge in power. Issun, on the land below, has finally realized his destiny, and is spreading the word and teachings of the gods throughout the land via his painting. So splendiferous is his work that he inspires faith in all the people of Nippon – giving Amaterasu the power to at last vanquish the evil plaguing the land.

It makes a certain amount of sense, from a theological standpoint – it had been stated numerous times throughout the game that Amaterasu’s power was derived from faith, and that the faith of the land had run dry in recent years. Thus Issun’s role is to spread the piety through art, culture, and storytelling… much like how religion in real life spreads. Unlike a lot of religious-themed stories, however, Ōkami’s ending doesn’t feel pedantic, didactic, or otherwise heavy-handed – which is why it works so well. Issun is taking his own belief in Amaterasu and spreading it to the masses, showing how faith from one becomes faith from thousands. 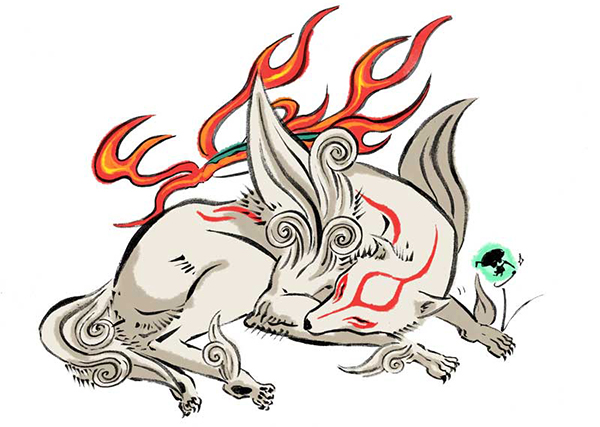 The ending of Ōkami is rather spiritual, but it fits the aesthetic, theme and message of the game. Issun is a directionless artist running from his responsibility who happens upon the goddess of the sun and finds purpose. Upon seeing the lengths to which she strives to protect her land, he grows and realizes his own petulance in the process. We, as people, do not relate to the divine mysticism of Amaterasu as much as we do to the more grounded humanity of Issun. The message he imparts is not one of religious fervor, per say, but rather one of faith in general – believe in those you trust, and share that belief with the world, and you just may make something magical happen.

A lot of what makes Issun great comes from the little snippets and lines of dialogue throughout the game, so it’s difficult to pin down what makes him so wonderful. His relationship with Amaterasu, his growth at the end of the journey, and his instrumental role in Amaterasu’s victory are what make him stand out. He’s not some mere bug, nor a meek wandering artist. He truly is an envoy of the gods, one whose role and change cannot be called into question.

That’s all for this week’s Character Column! Tune in next week, where we’ll be talking about one of the greatest – and most clownish – video game villains of all time. Until then!

“Leap before you think!”