Character Column: Inklings, Octolings, and the conundrum of player identity

Welcome back to Season 2 of the Character Column, where we run down all manner of royal, ruffian, and rough-around-the-edges rube in a weekly analysis of various characters. Last time we covered the questions of self-inserting avatars as they pertained to Corrin of Fire Emblem Fates.

Nintendo has had no small number of new IPs in the past decade, but none have made as much of a splash as Splatoon. Developed by newer blood at the Big N, and with a large marketing push that got a lot of fans (especially in Japan) on board, the squid shooter remains one of the most successful and resonant parts of the Wii U’s legacy, as its Switch sequel continues to host Splatfests well into its second year. And while the mechanics of Splatoon are great, a huge part of its staying power is in its personality. Everything has a Japanese pop-punk feel to it, bolstered by a wide range of quirky NPCs based on a wide swath of sea creatures.  This isn’t even mentioning the dynamic duos of the Squid Sisters and Off the Hook, announcers who have spurred internet flame wars just by existing.

If your art team can make a football helmet, a gas mask, and evil ski goggles look this fashionable then they’re doing something right.

Indeed, the wealth of characters to pick from is vast and deep. So instead of talking about this treasure trove of unique personalities, we’re talking about the player characters — the lovable Inklings and Octolings that populate Inkopolis, as they relate to the games’ single-player campaigns. Focusing on Splatoon 1’s starring Agent 3, but also delving a bit into Agent 8 of Splatoon 2’s Octo Expansion and a very small dash of Agent 4 from that title’s main campaign.

Why are we doing this? Well, I mentioned last week that I wasn’t done with this player avatar analysis nonsense, and as far as Nintendo goes, Splatoon’s the next best place to go for that kind of talk. But this particular essay was inspired by certain observations post-Octo Expansion that I’ll get into in a bit. But before I do…

Spoilers for Splatoon, Splatoon 2, and the Octo Expansion to follow! Read at your discretion!

Generally with the characters I pick for the column, they have a rich personality to describe, or at least an extensive backstory from which I can draw from. Even Corrin, who I called out for being generally flavorless, had lots of text to delve into. I can’t say the same for our intrepid protagonists here exactly. But for posterity, I’ll do the best I can:

Within the context of Splatoon 1’s story mode, Agent 3 is your average Inkling pulled off the streets of Inkopolis by Captain Cuttlefish to rescue the missing Zapfish and fight off the Octarian menace. They have no personality to speak of, and stoically overcome all of their trials and tribulations with a reserved “woomy.” Even their usual fleek fashion sense is standardized to some sort of… crossing guard uniform? 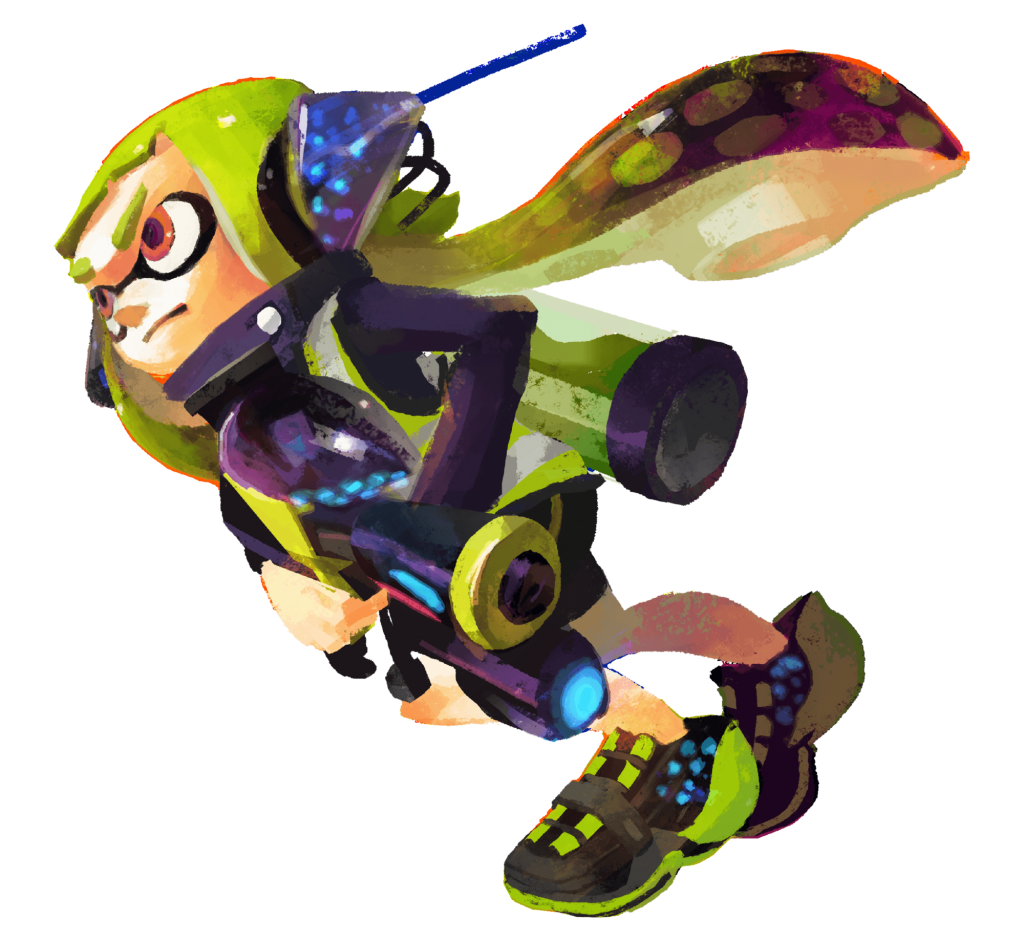 Those headphones could stab a Octoling through the heart.

It’s a pretty similar deal in Splatoon 2’s main campaign — your fresh new agent is similarly void of much intrigue or personality, to the point where you might ask why they even made “Agent 4” and didn’t just use 3 again. The answer is simple yet meta: a lot of people probably didn’t play the first game because it was on the floundering Wii U, so it makes sense to have a blank slate for the sequel that they can explain the happenings of Splatoon 1 to. Even so, little is distinguished between the two characters.

The Octo Expansion is where things get marginally more interesting. For starters, while your Octoling Agent 8 is still silent and stale, they have a pinch of a backstory — being one of the many Octolings who heard the Calamari Inkantation and escaped the Octarian grasp. Agent 3 returns, and while they in effect are still devoid of most character traits, they have a bit more of a role now, essentially acting as a veteran agent working off-screen before saving 8 from a blender. Towards the end, they get brainwashed by Commander Tartar, prompting a boss fight where you have to save them. 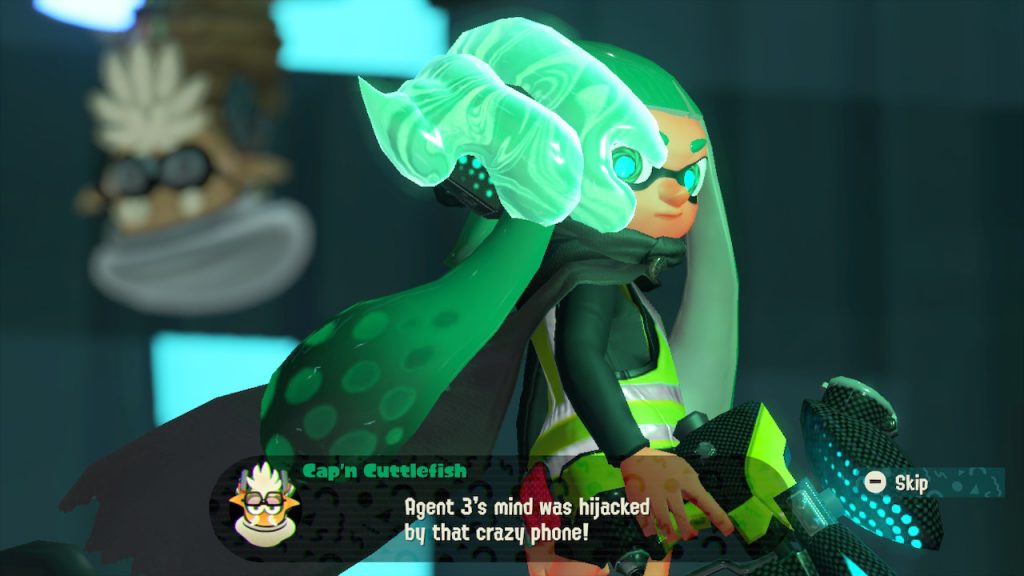 But while the Octo Expansion is a step up in terms of characterization, it isn’t exactly a whole flight of stairs above the others in terms of zestful avatars. Now, this flatness of character is not a bad thing — on the contrary, it allows one to achieve immersive role-playing much more effectively. Because they’re not exhibiting any real personality, it becomes easier to project whatever traits you desire onto the character. Or maybe they are just a colorful cephalopodic version of you. Either way, both 3 and 8 represent the player — their abilities, their quirks, and their playstyle are ultimately revealed through them. But in the wake of Octo Expansion, I noticed something. 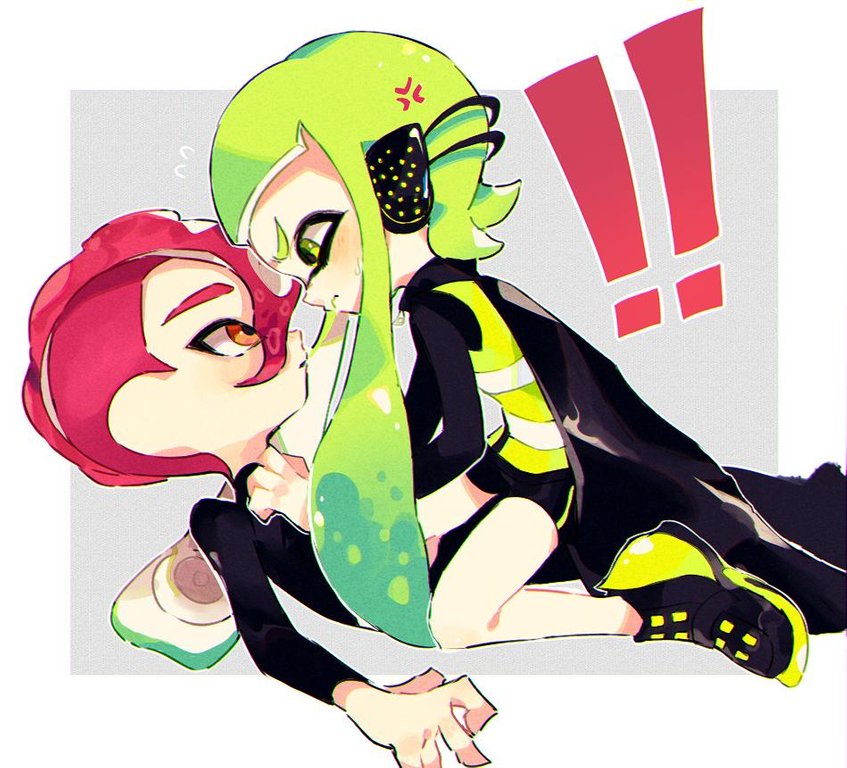 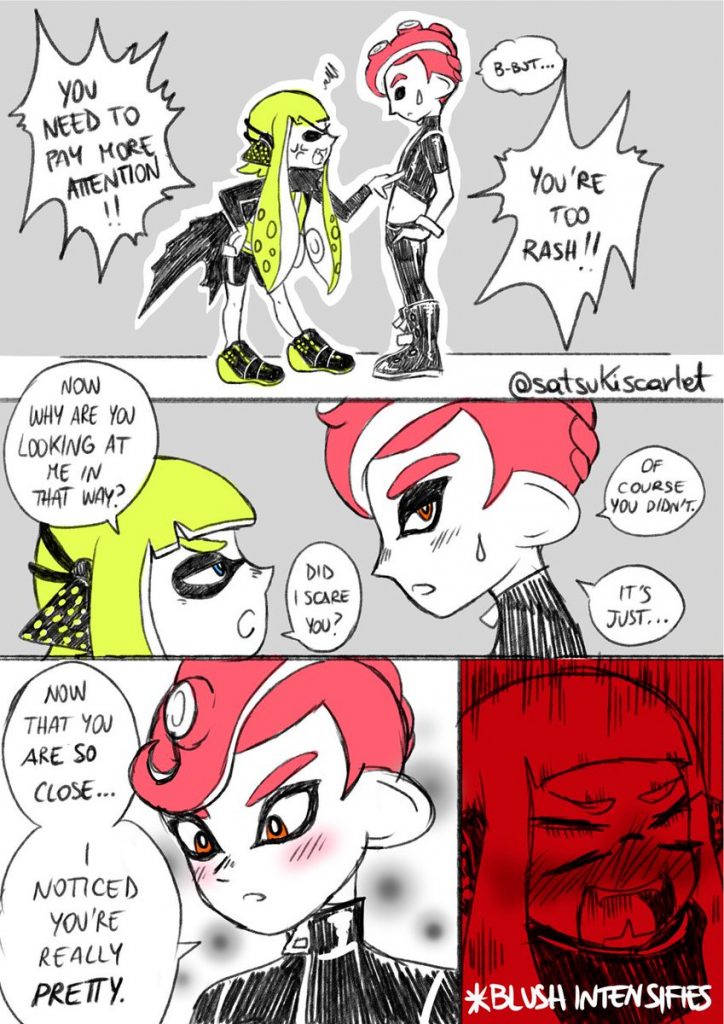 A new ship had sailed, and the internet was on board. 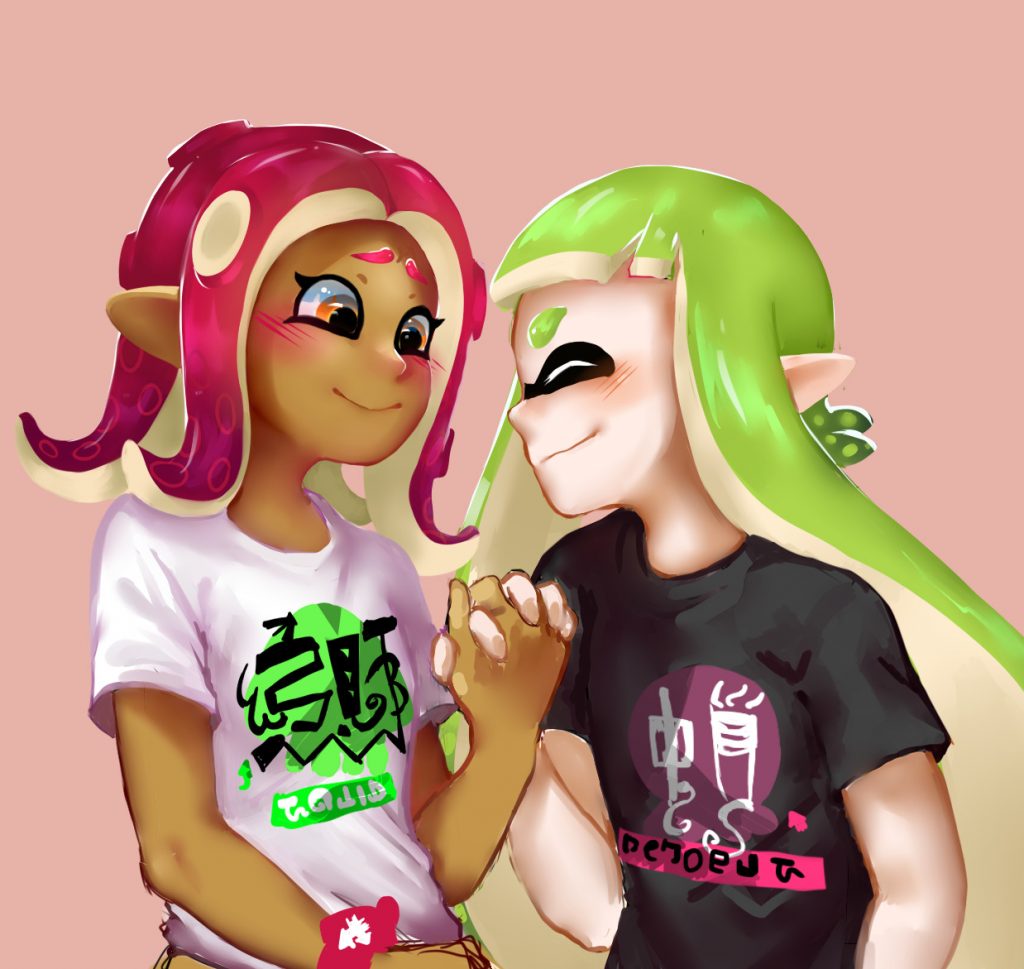 Now this emerging trend of “3×8” befuddled me… for about five seconds, before I remembered that the denizens of the web will ship a tree with a cardboard box if given enough emotional torque. But after I scoff-laughed at the wily ol’ internet at it again, I thought it was admittedly a little strange how people would view two of their avatars as separate entities. Shouldn’t you view them both as a reflection of yourself? Why would you romantically pair them?

It may seem obvious, but the answer is that they’re not both avatars any more.

3 is the loneliest number

So far, I’ve been arguing from the assumption that Agent 3 represents the player at all times, which is naturally faulty. As mentioned, within the Octo Expansion, Agent 3 is no longer player controlled, but a separate character with their own agency, objectives, and purpose — they still don’t exhibit much in the way of personality, but in their interactions with you throughout the campaign — including your boss fight — they no longer represent the will of the player. 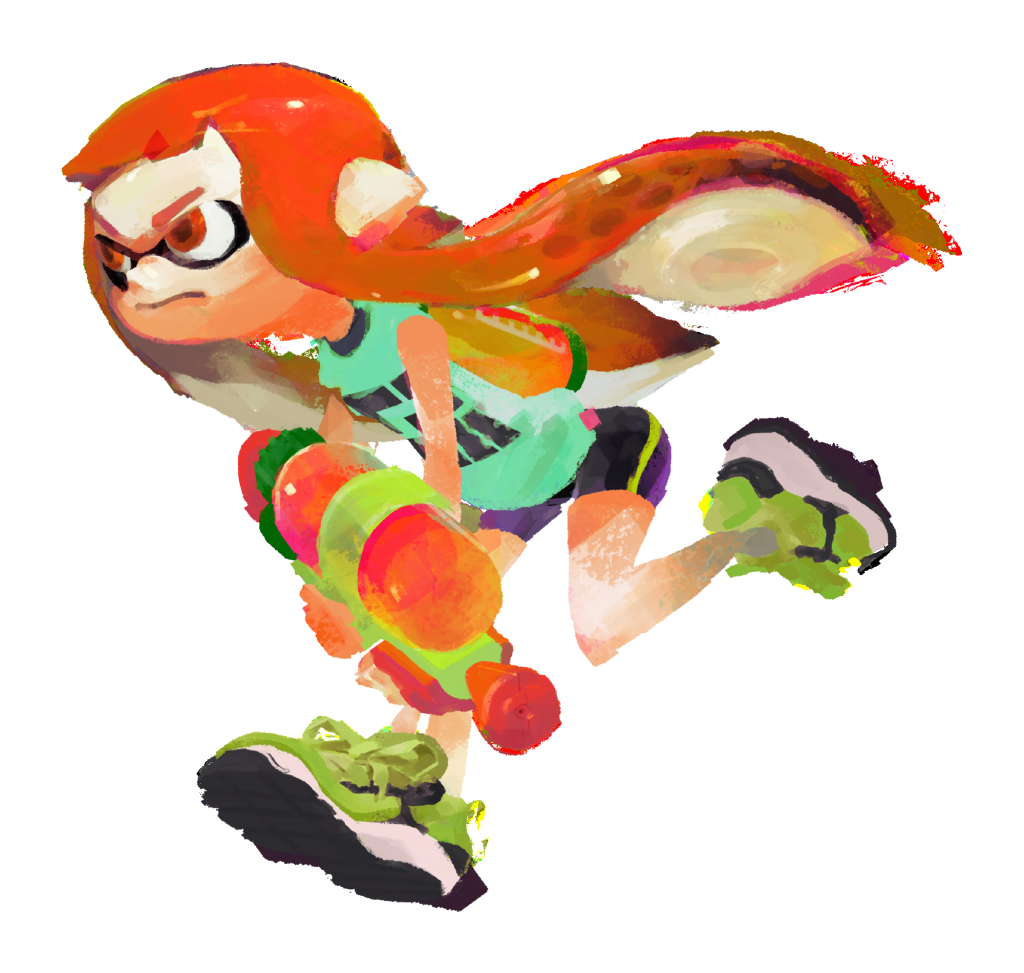 Is this you? Or is it but one of the many shadows cast on the wall of Plato’s cave?

Now, I want you to go back and reread that last sentence carefully. Notice how I naturally slipped into referring to Agent 8 in the second-person — as you, the player in specific? I’d bet that it probably didn’t even register. I did it subconsciously before I realized what I was doing, but that’s the effect that control has over a character — you truly do refer to them as yourself, a representation of yourself within the game world. And because Agent 3 is no longer a playable character, you no longer view them as yourself, but rather a separate entity.

But I think it would be similarly disingenuous to consider 3 completely separate from the player’s identity at this point in time either. And for that, I point to what might just be the highlight of the Octo Expansion: their boss fight. 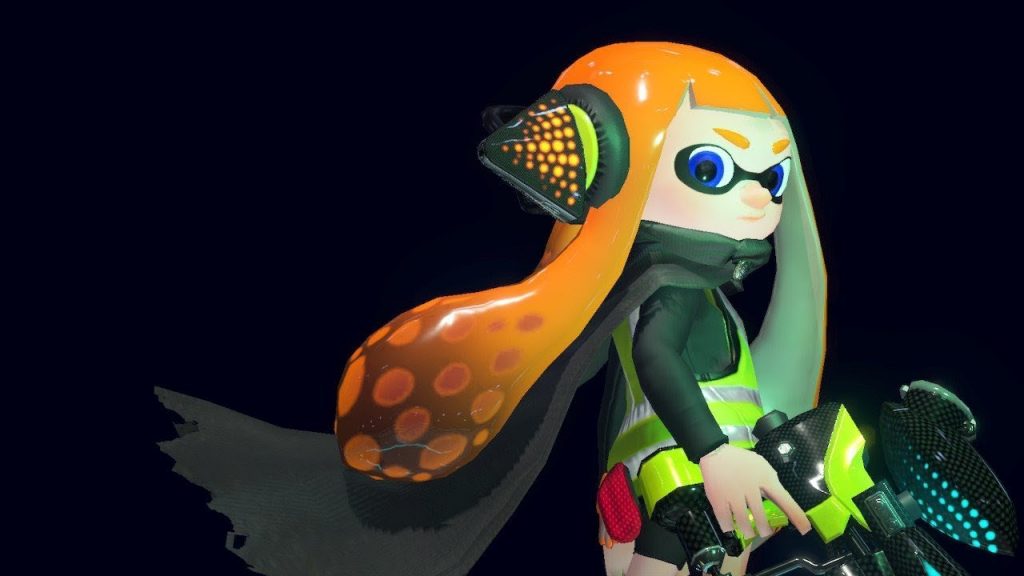 It’s grueling, it’s exhausting, and it’s the greatest fight in the entire series so far. The battle against “Inner Agent 3” sticks out not just for putting the Calamari Inkantation on blast and making you restart a million times before you finally ink the bastard once and for all, it represents a symbolic struggle — for both Agent 8 and the player, separately. Let me explain:

In terms of story, the fight against Inner Agent 3 is a flashback to when 8 heard the Calamari Inkantation for the first time. According to Captain Cuttlefish, 8 actually battled against 3 before the events of the Octo Expansion, but didn’t finish before getting their memories back. So the fight is a mental representation of Agent 8’s desire to emerge victorious in that bout — providing the smallest modicum of character in the process.

At the same time, the fight represents the player surpassing their past self. Agent 3 was the avatar they utilized within Splatoon 1 — a representation of their skills, abilities, and finesse in the previous iteration, polished to a fine degree. Even as they utilize a number of moves that mirror and surpass your own, you develop the tenacity to stick with it, and overcome your previous limits. 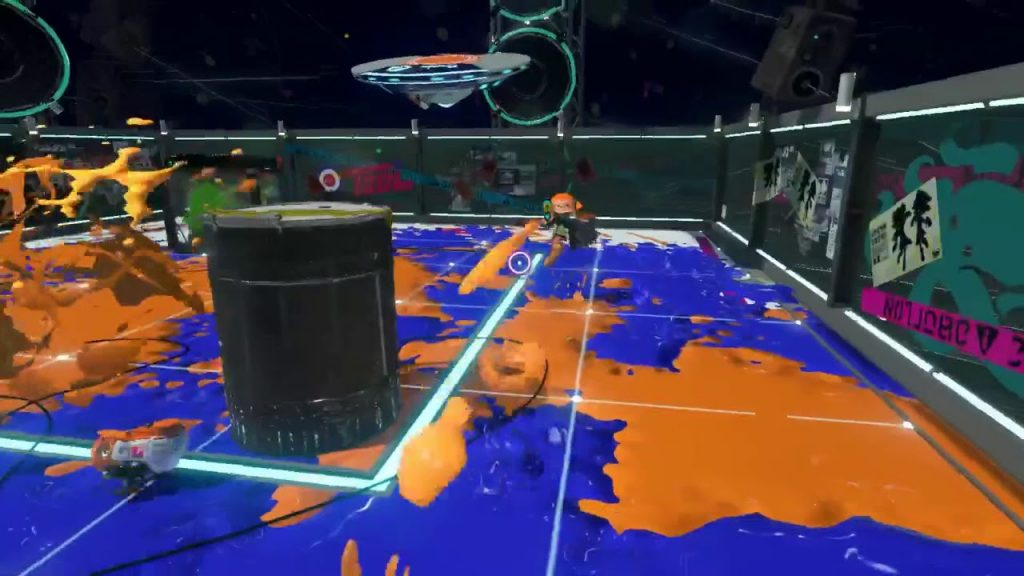 Basically, it’s Celeste but with paintball. And not like Celeste at all.

So the entire Inner Agent 3 battle represents a remarkable fusion of both player and character motivation, born out of its unique properties and situation — it’s both character vs. character and player vs. self, creating a fascinating ludonarrative situation that I don’t think I’ve seen anywhere else. And that’s why it’s such a great and memorable fight, as torturous as it is.

Who am I? Am I not unique? Maybe I’m not here at all

I don’t know if there’s a ton more I can say about the agents — their characters are pretty light, as I mentioned — so I’d like to take a step back and reevaluate the broader topic of avatars in conjunction with the Corrin piece. 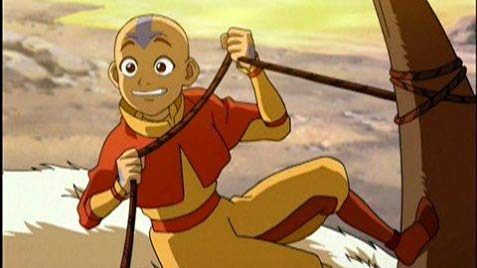 First off, I’d like to talk about the greatest television show of all time…

What, ultimately, makes or breaks an avatar? A lot of it has to do with control — in FE it can be more difficult to separate the avatar from the other characters because you take command of several characters at once, whereas in Splatoon you’re always commanding one particular squid kid at any given moment. Customization plays a role, too — one of Splatoon’s great appeals is the huge range of styles you can employ, and it’s no accident that the estranged Agent 3 of the Octo Expansion only has one look that you can’t affect.

But I think you can’t necessarily divide the ideas of “character” and “avatar” into mutually exclusivity. It’s more of a gradient — sometimes, player characters fall more or less into one category or the other, and other times in line is blurred beyond recognition. Mario has a distinct personality, but he is in large a representation for the player in the world. JRPG characters tend to be more distinctly their own, especially when you can control more than one of them. But unless you’re literally taking control of some supernatural force or entity (like in say, Simcity), just about any playable character will, to some degree, act as a self-insert. 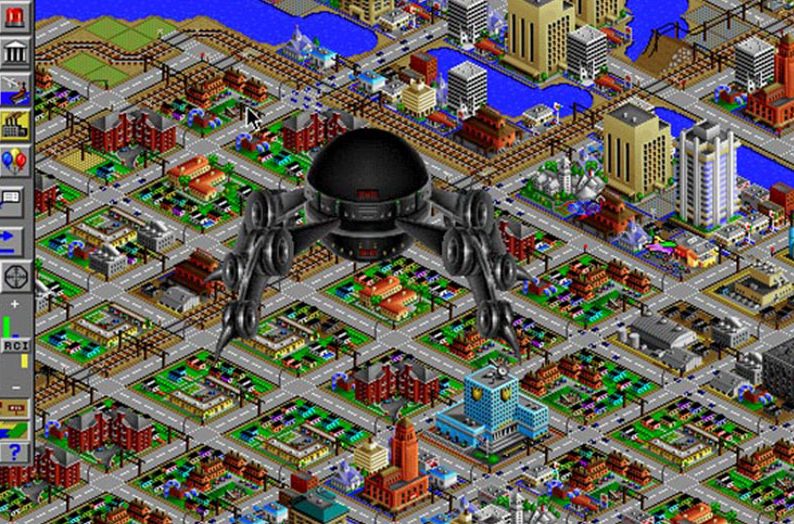 Though I do personally identify with the giant robot that ravages the city without cause or remorse.

And Splatoon definitely leans towards the avatar end of the spectrum, regardless of the hints of flavor I discussed here. Being able to deck out your Inkling in fresh duds is a huge part of the appeal, and it wouldn’t be the same if you commanded a more rigid character. But if Corrin shows the pratfalls of giving your player character too much agency, then they showcase that silence is golden, and how just a smidge of self-actualization can lend to some fascinating moments.

I’m sure that Splatoon 3 and beyond will introduce other Agents that also tie into this issue in other intriguing ways. But in the end, your squid kid will always be your squid kid. Or octo tot. Or cephalo-child. Or whatever race of ocean dweller they add as a playable species next. 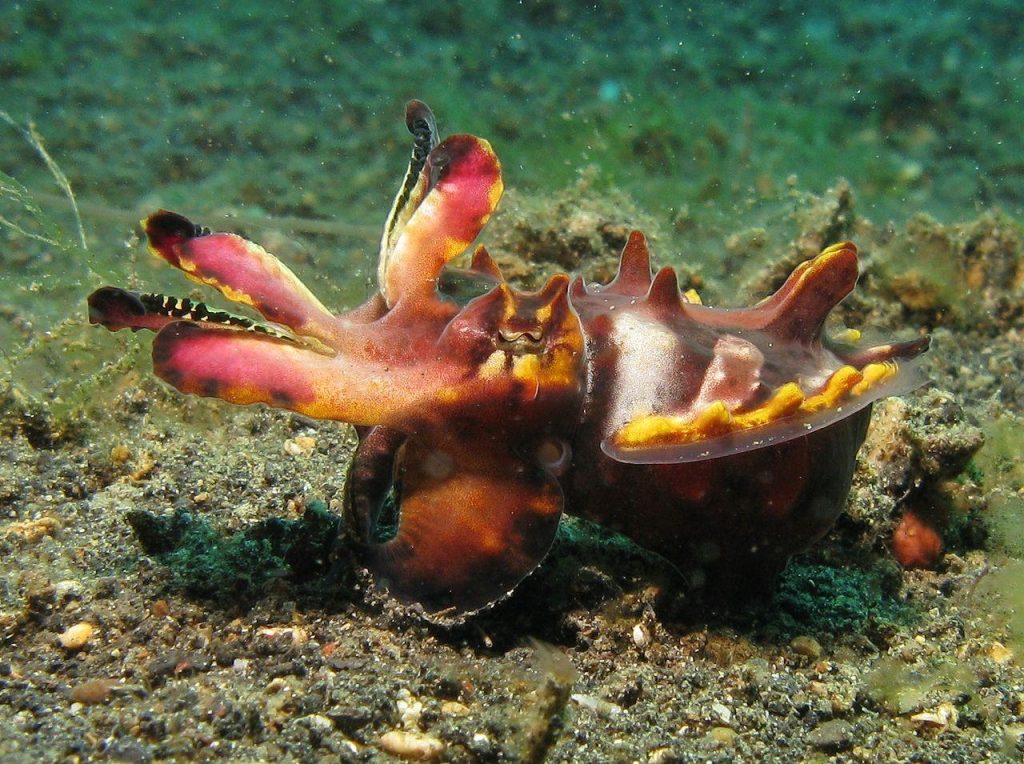 My vote is for the Flamboyant Cuttlefish (metasepia pfefferi). Not only does it look bizarre and fabulous, it has poisonous flesh!

Next time: We’ve covered what makes the player distinct from the character, so now we move on to distinguishing the enemies from each other, as we talk about the goodest boi in the whole entire universe. Until then!

“Woomy!” – All inklings, at some point in their lives.