Last time, we covered the incomparable Waaaaluigi. And after a brief break last week, we’re back to cover one of the most infamous characters in all of video games: the Duck Hunt Dog.

The snicker of nightmares

There’s not a more notorious canine from the NES days than this hound. His appearance in the 1985 classic is perhaps the most memorable part of the game, simply because it stands out more than the relatively simple light gun gameplay. Most of the time, the dog is docile, diving into the bushes to drive out the various waterfowl. He’ll grab whatever ducks you shoot down in hands, gaining some anthropomorphism in the process. But that’s not what cemented him in the halls of video game infamy. 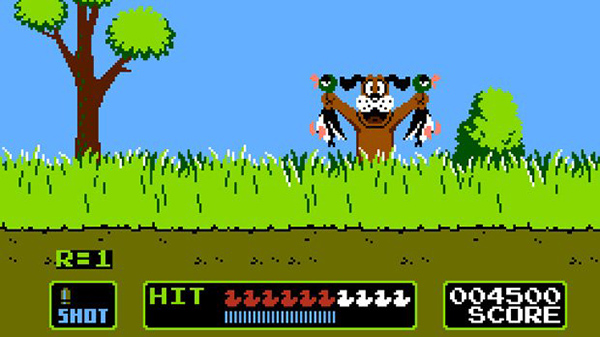 No, that would be his derisive, taunting laugh that he employs whenever you miss a duck and it flies away. Everything about the chuckle is aggravating – the wide, jeering grin, the heaving animation, and that horrible, horrible laugh. It’s as if it were scientifically engineered to annoy the player as much as possible. The dog holds no sympathy, no pity in his insulting chortle. And, as Duck Hunt has no actual ending, he is guaranteed to do so eventually. Even if you make it to level 100, as the glitchy, insanely fast ducks dart around the screen, the Dog will still be standing there, laughing as the world slowly bleeds to death.

Yet the Dog’s role is important. Back in the day, video game failure tended to be just that: failure. A small Game Over screen, maybe with a little flair like “Return of Ganon” or “I’m Finished!”. But overall, never really anything super encouraging or motivational. The Dog is an exception – his snideness actively encourages the player to do better, as if saying “Ha, look at this loser, bet he/she couldn’t hit the broadside of a barn!” And that fires the player up, motivating them to stick it in the Dog’s face and prove him wrong.

But even still, they can’t give the dog his comeuppance. He remains forever out of reach, a cruel and immortal arbiter of the world. There is no way to deliver justice to his cackling frame… or is there?

Duck Hunt actually has a lesser known arcade version, known as Vs. Duck Hunt. As the name implies, it’s a multiplayer experience, and otherwise more or less recreates the NES game quite faithfully. But there is one notable addition: the Bonus Stage.

As far as bonus stages in games go, it’s fairly standard – shoot as many ducks as you can before time runs out. You have unlimited ammo, so no need to worry about that, but there’s one big thing about the Bonus Stage – the Dog will pop up in the background, and you can at last shoot him.

Does the player care? Heck no.

Scores of players will shoot the dog without a second thought upon his appearance here, finally earning some well-deserved catharsis. The Dog offered no empathy to you – why should you offer any to him? True, he’ll forever be there at the end of the game to laugh forever, but you know that you can deliver swift and divine justice to him at nearly any time, given that you have enough quarters.

Of course, shooting someone in real life merely for taunting you would be a grievous overreaction… but this is a video game, so I think there’s no cause for alarm.

That’s all for this week’s Character Column! It was a tad short, but hey, there’s only so much you can do with a 30 year-old mutt who’s been in three games (one of which was Smash Bros.) Tune in next time, where we’ll dive in deep to one of the greatest characters in gaming – the Hunter. Until then!

“Shoot the ducks, not me!” image source.