Confused? Well, for those not in the know, the grizzled gorilla is in fact the original Donkey Kong from the first three arcade games, and the grandfather (or sometimes father) of Donkey Kong Country’s titular ape. While these early games were relatively devoid of character, Cranky got a lot of personality added once the series made its SNES debut. So let’s get right to it, shall we?

Back in my day…

Cranky is actually the first thing seen in Donkey Kong Country (besides the Rareware and Nintendo logos, at least). He’s playing a phonograph and tapping his foot to the classic DK arcade music before modern Donkey Kong busts in and shows off his dance moves – prompting Cranky to shake his cane at his grandson and toss an exploding barrel at him. Cranky… isn’t exactly the most affable primate, to say the least. 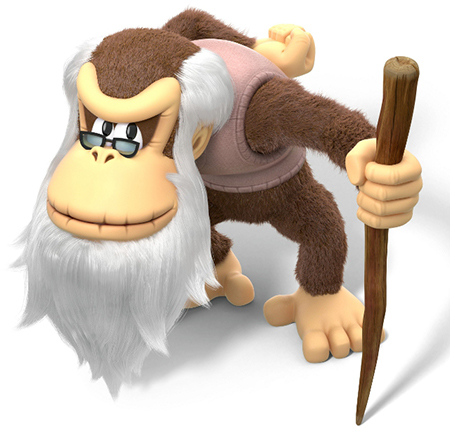 Cranky was – and is – clearly a play on the crotchety old man character, ranting about kids these days and how things were better in his time. This would be amusing in and of itself, but what makes Cranky truly stand out is his utter disregard, and perhaps even contempt, for the fourth wall. He constantly complains about how easy games are nowadays, takes pride in his old three frame of animation, and is generally grouchy towards what he perceives as a softer gaming populace. And he’s not entirely wrong – after all, SNES games were on average much harder than their NES predecessors, and graphical improvements (particularly for DKC) struck a stark contrast with the industry’s forefathers.

Cranky apparently has the skill to back up his complaints, because he boasts in the credits of how he beat the game 100%… in under two hours. Such a feat is indeed accomplishable by human means, but it takes a fair amount of skill, far more than any nine year-old with a SNES would likely have. This, combined with his aforementioned qualms, give him an air not dissimilar to an old army veteran complaining that his grandkids are wusses. And while Cranky doesn’t show much kindness towards his grandsons (Diddy is his great grandson, right? Because he’s DK’s nephew… ? The Kong family tree will have to be sorted through at another time), he ends up as one of the most distinct characters in the game due to his wit and humor. 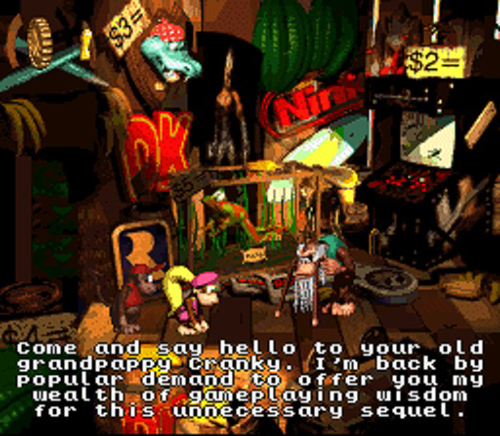 Speaking of wit, Cranky has shown a remarkable amount of intelligence over the years. While he usually provides hints to his erstwhile companions, he’s also brewed potions in DK64 and shown that he has an immense knowledge of the game’s universe, inside and out. He’s most certainly not some dumb monkey – he’s a rather clever ape, when you get down to it. But where are we going with this?

Flash forward to the year… well, just about any time after the advent of the internet, really. As gaming culture grows more and more popular and widespread, certain corners of the web scoff in disapproval. Their sworn enemies – casuals, children, and those who call all game systems “Nintendos” – continue to flood their hobby with their presence. Weary laments escape the Doritos-stained lips of the “gamers” – things were different in their time. Who remembered how awesome Gen I Pokémon was? Why were none of these Star Fox games as cool and rad as 64? How could these plebeians love overrated trash like Final Fantasy XIII and not remember the hidden gem (read: international best-seller) that was Final Fantasy VII? Things were different in their day.

It’s a great sort of irony that in the years since Cranky’s introduction, the world has grown to contain many with his exact viewpoint – that these new games aren’t as good as they used to be, that the new generation has been spoiled rotten by convenience and low difficulty. Back in the day, they earned their game victories, by golly, and these young whippersnappers were content to just play Candy Crush on their phones! Why, when they were seven, they were able to beat Mega Man games out of order! 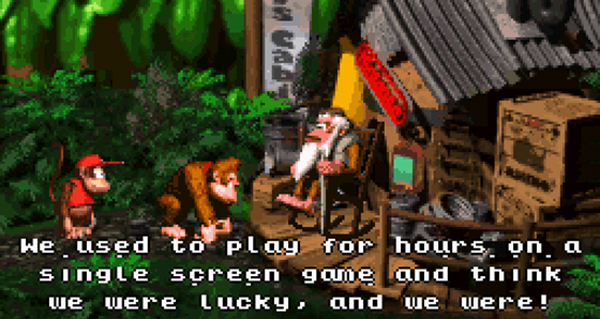 Joking aside, it’s a strange instance of prescience on Rare’s part that Cranky would so closely resemble modern internet commenters. With a couple of differences, of course – Cranky is blithe and somewhat endearing, while denizens of the web… usually aren’t. Either way, both reflect the all too common idea of nostalgia blindness – which isn’t something that’s new to the internet age, per say, but in terms of games it’s definitely a more recent happening. Pokémon, as previously mentioned, is a prime example – that the early games were better simply because they released during the commenter’s childhood, and that newer generations aren’t as good for whatever arbitrary reason they feel like arguing.

In this way, Cranky was, in effect, the first “hardcore gamer.” Constantly bragging about his accomplishments. Scoffing at younger folk having fun and taking it easy. Not being able to accept that he’s been slighted or that he may be wrong. Cranky doesn’t have a particularly great amount of depth or complexity, but that doesn’t mean he offers no points of interest to him.

Cranky is obviously not the villain of Donkey Kong Country – heck, in the most recent installment, he’s a playable character. Ironic that without modern games doing well and being innovated upon, he wouldn’t be in the spotlight, no? Regardless, he represents a sort of philosophical opposite to DK’s journey – one that constantly eggs him on with taunts and dismissals, constantly firing up the player to do better and stick it in the old ape’s face. And while Cranky never really gets his comeuppance, he never really needs to receive it. Sure, he’s a grouch and a grump, but he’s not really malicious, and is all things considered pretty funny, especially when he jabs at certain complaints towards the game itself (“Y’know what they say, all graphics and no game play!”) Either way, he’s definitely one of, if not the most, memorable characters in Donkey Kong lore. 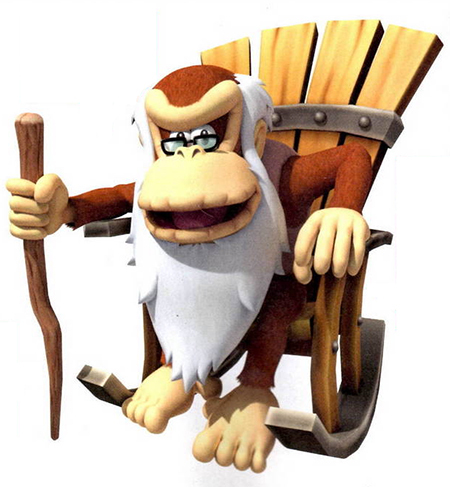 Thanks for reading this week’s edition of the Character Column! Tune in next time, where we’ll be talking about the most famous glove in gaming, the Master Hand. Until then!

“They can’t keep this level of graphics up for much longer! We used to be lucky if we only got three shades of grey, let alone any real colors!”