A journey with Ace Attorney: Where it began

15 years, has it really been that long? I was only three years old when the original Ace Attorney game came out overseas, and at that point I had no idea how big of an impact the over-the-top lawyering franchise would have in my life. Of course, I probably didn’t even know what a lawyer was back then. When I did finally discover the franchise, however, I was sent on a thrilling journey through complex cases with shocking twists. The music, characters and stories in Ace Attorney games all give me an extreme sense of nostalgia, and the franchise is definitely my favorite collection of video games.

Spoiler warning: If you haven’t played the Ace Attorney series, stop whatever you are doing and go download the trilogy in the eShop. It’s worth your time.

A trip to Game Crazy

I had heard of the Ace Attorney franchise before the summer of ‘09, but I’d never experienced it for myself. My mom had played the first game when it came to the U.S. a few years earlier, but she had since gotten rid of it. My older sister was looking for a new game to play during the summer, something that would make her think. We drove down to Game Crazy, the used game shop that has since gone out of business. On the shelf she saw “Phoenix Wright: Ace Attorney – Trials and Tribulations.” My mom recalled that she had enjoyed the Ace Attorney game she played, and the next thing I knew, we drove home with the third title in the Ace Attorney series. (Side note: I bought WarioWare DIY that day, a game I still go back to multiple times a year.) 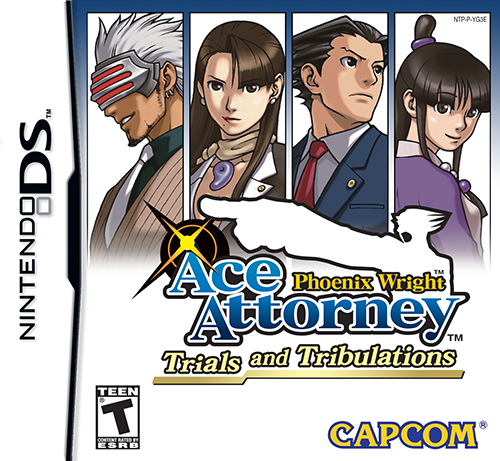 While my sister was playing through Trials and Tribulations, she slowly realized there were characters and references she didn’t understand. Sooner than later, she finished the game and wanted to play more of the series. She let me pop the Trials and Tribulations cartridge into my DS Lite, and that’s when I got my first taste of my favorite franchise.

I vividly remember standing in the hallway getting ready to head back to the store with my sister. I was in the middle of my first trial, and I was confused. Why was Phoenix Wright a college student in a pink sweater? Why was I playing as Mia Fey, a character I’d never heard of before? In the very beginning, I thought I had to click “Press” as soon as the character said something suspicious within a statement, not just on the statement as a whole. My sister was my own personal walkthrough for the first few cases in the game. While proving Phoenix innocent and locking up the crooked Dahlia Hawthorne was a good time, the second case is where my love for the series blossomed. 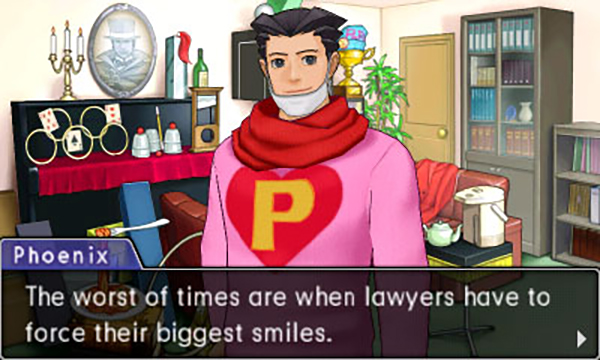 There’s something special about firsts: first love, first car, first concert, you name it. As far as Ace Attorney goes, there’s nothing quite like a first prosecutor. For most people, the first rival they got to face off against in court was Miles Edgeworth. When I first started playing Trials and Tribulations, the name “Miles Edgeworth” meant nothing. Instead, I faced off against the mysterious masked man named Godot. Godot was a brilliantly written character full of depth and mystery. I couldn’t wait to learn more about the man on the other side of the courtroom.

The tale of Godot is enthralling, yet heartbreaking. Another victim in the sick and twisted life of Dahlia Hawthorne, the man once known as Diego Armando went into a coma for years. When he finally awoke, his hair had gone white, he put on a mask, and he became a prosecutor. While cases two and three of Trials just introduced us to this man, cases four and five really told us who he was.

The fourth case took us back in time to Mia’s time behind the bench once again, with Dahlia Hawthorne at the center of yet another case. Diego Armando was the lawyer mentoring Mia, and it was obvious that Diego would later become Godot. Terry Fawles, the defendant in that case, was yet another innocent victim under the wrath of Dahlia Hawthorne. Right as the trial was finally turning in the defense’s favor, Terry Fawles took the stand and took his own life. Dahlia told him to drink the contents of the special necklace she gave him if things weren’t going well. It was a gut wrenching moment in the Ace Attorney series.

Later, it was revealed that Godot was also poisoned by Dahlia Hawthorne. In the amazing final case, the plot was centered around Dahlia once again. She had been executed long ago, but she still came back to haunt the living. While at a spirit channeling temple, Godot saw the woman that had changed his life forever. In a moment where Godot seemed to lose control of his own actions, he killed her. He knew it couldn’t have been Dahlia, but that didn’t stop him from wanting revenge on such an evil woman.

Phoenix eventually proves that Godot was the culprit behind the complex final case. Godot begins bleeding from his mask, but says they are his tears. Before he is hauled off to jail, Godot and Wright enjoy one final cup of coffee together.

Let’s wrap it up

Trials and Tribulations was an exciting jumping on point for the franchise. While I would recommend that every new Ace Attorney player starts from the beginning of the series, I loved beginning my Ace Attorney experience with the story of Mia Fey, Dahlia Hawthorne and Diego Armando. When Miles appeared in the final case, I couldn’t wait to see how his story had unfolded. It was the beginning of a wonderful journey throughout the series, one I can’t wait to tell you more about.