20 years later, Fire Emblem: Genealogy of the Holy War remains one of the series’ most unique (and important) entries

Given that it’s attained a massive popularity and prestige in the West only within the last few years, it’s easy to forget that Fire Emblem games have been around since the Famicom days. Until the series’ seventh entry (Rekka no Ken/Blazing Sword, known simply as Fire Emblem in the West), the grandfather of the strategy RPG genre remained in Japan, only free to come over when other tactical series like Final Fantasy Tactics and Advance Wars proved such games could have a foothold in western markets (though the appearance of Marth and Roy in Super Smash Bros. Melee didn’t hurt). As a result, the first six entries in the series never got a western release, save for a remake of the very first game on the DS as Fire Emblem: Shadow Dragon. Thus, a large portion of the series has gone relatively unnoticed by fans outside of Japan. 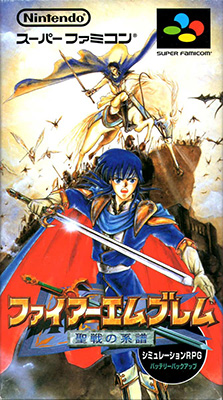 The fourth Fire Emblem game, Seisen no Keifu – translated as “Genealogy of the Holy War,” which is clearly the coolest subtitle of the lot – is perhaps the finest of those six that never made it to western shores, and also one of the most popular. But looking at its mature content and complex subjects contrasted against Nintendo’s family friendly image in the ’90s, it’s clear why the Big N didn’t bring the series over for a long time.

Genealogy is a very different game compared to today’s Fire Emblem, and even compared to the series as a whole it stands out as one of the most unique entries, for a multitude of reasons. Gameplay wise, the series was breaking into the adolescent age of Super Famicom era JRPGs, moving away from the relative simplicity of the Famicom, and fleshing out the graphics, musics, and mechanics. While the third FE game (Monshō no Nazo/Mystery of the Emblem) was also on the Super Famicom, it didn’t push the boundaries of the series in the way that Genealogy would. 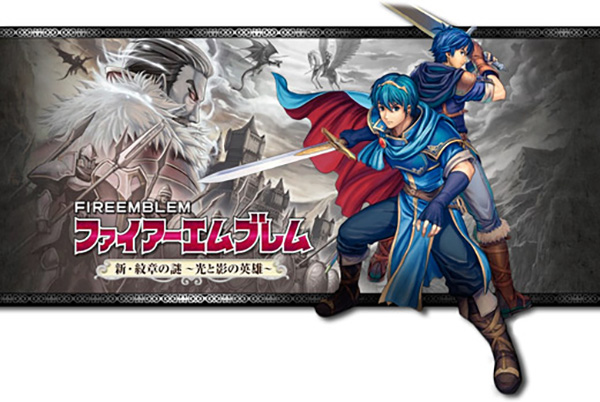 Genealogy was the beginning of several staples of the series that fans would come to know and love. The classic weapon triangle (swords beat axes beat lances beat swords) debuted here, as did its counterpart of the magic trinity. For the first time, players could actually see the range by which their units could attack. Physical and magical units now had separate stats to determine their offensive power. Weapon ranks, previously a stat affected on level-up, was now affected by class and promotion. And perhaps the greatest addition, skills, which gave your army a bevy of unique abilities with which to do battle. All of these laid the groundwork for modern titles like Path of Radiance and Awakening. 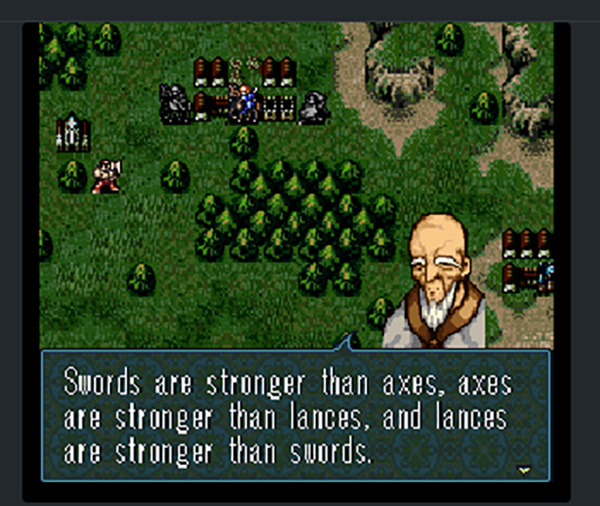 Yet Genealogy also has a number of oddities that would never return, some good, some bad. For one thing, the game only had 12 chapters – less than half the number of the average FE game – but in return, they were three to four times as long, often featuring multiple objectives and armies. There was no battle preparations screen, with all unit management and arena fighting instead done inside the various castles that dotted each map. Characters could not trade directly, so instead they had to sell weapons to a pawn shop so that their comrades could buy it back… with their own money, as each unit had separate Gold amounts. When characters promoted from one class to the next, their levels aren’t reset, so it was advisable to do so as soon as possible.

All of these mechanics – whether they were one game wonders, or would go on to become staples of the series – show how much innovation went into the ideas behind the game mechanics. There had been significant changes in previous Fire Emblem games before, but nothing to the extent of Genealogy of the Holy War.

All these factors combined made Genealogy a wildly different Fire Emblem game from those that preceded it – but gameplay was only a portion of this equation, because the story is what makes Genealogy truly stand out.

While the plots of the first three FE games was adequate for the time, Genealogy’s story really pushed the boundaries of video game storytelling for the time – as did a lot of JRPGs of the era. The game’s beginning introduces a deluge of names and faces as it explains the various political machinations of the Jugdral continent, eventually culminating in the game’s true start. The main character, Sigurd, a knight of the kingdom of Grannvale, is sent to rescue a kidnapped lady from the neighboring land of Verdane. As Sigurd fights alongside his comrades, he meets a forest woman named Deirdre, clashes with former friends, and eventually uncovers a continent-wide plot of deception and horror. Characters and places named after Norse and Irish mythology mix together to form a staggeringly complicated, yet very well done, story.

While things appear simple at first, the grand thread of familial and political relations slowly unravels to reveal a tale of demonic cults, shocking betrayal, and Shakespearean tragedy. The game is filled with dark themes and mature situations, ranging from mass murder to much worse, making it clear why Nintendo wasn’t keen on localizing the title back in 1996. The number of characters and gloomy themes leads some fans to jokingly call the game “A Song of Ice and Fire Emblem,” after George R.R. Martin’s acclaimed dark fantasy novels, which happened to begin releasing the same year.

The game’s mechanics also do an excellent job of tying into the plot. Almost all the notable characters are descended from crusaders of eons past, whose holy blood not only grants them stat boosts, but the ability to wield legendary weapons. While the series’ beloved support system wouldn’t be implemented for another two games, Genealogy did have a somewhat primitive “love” stat that determined who in your army would get married – and eventually have children. Yes, Genealogy was the first title in the series to boast a second generation of child units, a mechanic that wouldn’t return for over 15 years (and when Awakening did bring it back, the plot and gameplay implements were quite different.)

While the gameplay and the plot both deserve praise, so too must the technical prowess of the game – Genealogy’s battle sprites are very well done for the time, and the character portraits hold a ’90s anime style that gives a feeling similar to shows like Gundam Wing. The soundtrack is quite impressive, too: 114 tracks, an immense number for a game of that time, and one that still has yet to be matched in the series.

Genealogy of the Holy War turned 20 years old yesterday, and its impact can still be felt on today’s Fire Emblem games. While usually overlooked by the gaming populace at large, it’s much beloved by die hard FE fans, and often mentioned as one of the series’ finest. To those interested, a new fan translation patch was released the other day in celebration of the anniversary, and is a marked improvement over the previous, error and bug-ridden translation. While the chances of a western release for the game seem very slim indeed (discounting the possibility of a remake), fans can still enjoy the surprisingly dark, complex and massive game today. It’s one of my personal favorites, and will always stand as a hallmark for the strategy RPG genre as a whole.
Leave a Comment