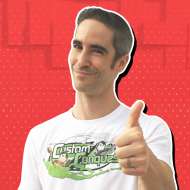 TJ Cencula
TJ joins the battle as the force behind the Nintendo Wire original series: Smash Supremacy, Mii V Mii and Custom Conquest. You may know him better as one of his two alter egos: Hero TJ, the exuberant expression of TJ's inner child, and Dark TJ, the maligned manifestation of his shadow self.
This user account status is Approved
About About
Posts Posts
Comments Comments

Nintendo has played an inspirational role in TJ's life ever since the first Legend of Zelda, in all its golden glory. After film school, TJ followed in the footsteps of his hero and set out for adventure from his hometown of Chicago, Illinois to pursue a career of swashbuckling for film, television and new media in Los Angeles. TJ combines his passion for martial arts and media creation to deliver action-oriented, Nintendo themed content on a quest to provide entertainment to the greater gaming community.