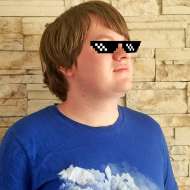 swordlegend96
Slayer of the End-God, Level 150 Warsoul Conqueror, Lover of Dew and Doritos. When he’s not gaming in his sick battlestation, he’s practicing his wicked tonfa, watching giant robot anime, and writing for this website. Any rumors of him being Ben Fruzzetti are just that - rumors.
This user account status is Approved
About About
Posts Posts
Comments Comments

swordlegend96 is a millenia-old warrior, poet, and philosopher from the Deeps of Ghanem.

Born of lightning, chaos, and a need for 60 frames per second, swordlegend96 emerged from the deep with only two things: a rad samurai sword and a desire for justice. He’s crossed Hyrule, Zebes, Archanea, Dream Land, and Sesame Street in his quest for all that is good and holy. He is most definitely not a split personality of one Benjamin Aaron Fruzzetti created in a freak accident involving gamer-branded food, a low-end RAM chip, and a book titled “that’s not how dissociative-identity disorder works, you moron”.

swordlegend96 fancies himself a perfect being, equally wise, pure, righteous, mighty, honorable, and dignified. He has 100%ed over 130 games in his library with the finesse and prowess of a sommelier of play. His opinions are nuanced, critical, and discerning, meaning his opinions are always made with the greatest amount of objectivity possible. His favorite titles include Paper Mario: Sticker Star, Star Fox Adventures, and of course Zelda II: The Adventure of Link, a game which he has described as “a triumph of artistry, emotion, and game design… broseph.