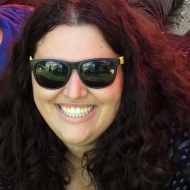 Jennifer Burch
Illustrator, designer, writer and big Nintendo geek, you can find Jennifer with an N3DS within reach 24/7. As the oldest of three, she has survived many Mario Party, Super Smash Bros. and Mario Kart sessions intact in addition to getting her brothers hooked on some really weird games. (Cubivore anyone?)
This user account status is Approved
About About
Posts Posts
Comments Comments

Jennifer is an illustrator, designer, writer and all around geek from Santa Clarita, California.

Smitten with the SNES and Game Boy at a young age, Jennifer found herself exploring Koholint Island and Mario Land daily. Over the years of discovering new games and recreating key art from Nintendo Power magazines, Pokémon’s debut in 1998 cemented her as a massive Nintendo fan. Nowadays, you'll find her with an Aerospray RG and eagerly awaiting for Splatoon 2.

She has pursued art at College of the Canyons and Art Center College of Design. Jennifer hopes that one day she’ll be working in the industry -- film/television or video games -- and can recreate the magic for others that she first experienced when watching her first film or playing her first game.