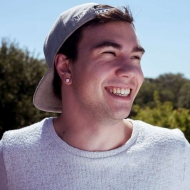 George Comatas
As a wannabe social media personality and professional in the world of sarcasm, George does his best to always adapt to the changing world around him. He considers himself a maverick: a true-to-heart gamer with the mind of a pop star. Whether this makes him revolutionary or a setback, he's yet to find out. But one thing’s for sure; he's one-of-a-kind.
This user account status is Approved
About About
Posts Posts
Comments Comments
Collection Collection
Forums Forums

George is a copywriter, gamer, designer, and puppy enthusiast based out of Ridgewood, New Jersey.

Currently studying advertising copywriting at The Savannah College of Art and Design, George has a creative mind that's constantly at work with new ideas. And as a pop culture hound, he's always being influenced by what's new in the media, be it music, television, film, or otherwise.

Growing up just outside of The Big Apple itself and the ever famous Nintendo World Store, it wasn't hard for him to foster his addiction to the company. Before long it grew into a love of all gaming, but there's no dedication he feels stronger than his to Nintendo. While The Legend of Zelda and Super Mario Bros. hold special places in his heart as games he watched his dad play on the SNES before he could, ultimately his heart lies with Pokémon.