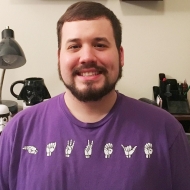 Bryan Finch
A video editor by trade, Bryan Finch is a lifetime Nintendo fan, and he loves writing about his passions. He also spends too much time playing and watching fighting games. Bryan enjoys​​ movies, comics, cooking with his wife, and the idea of Elite Beat Agents 2.
This user account status is Approved
About About
Posts Posts
Comments Comments

Bryan is a videographer, editor, reporter, and gamer based out of Roanoke, Virginia.

A lifelong fan of all things video, Bryan graduated from NYU with a degree in film and television. He's currently working at a news station as a graphics and camera operator. With a passion for editing video and writing about things he loves, Bryan is always looking forward to the next step.

Bryan has always been a die hard Nintendo fan. From his days of playing Mario on his parents' NES to putting too many hours into Smash 4, his favorite titles have always come from Nintendo. Bryan is also an avid fan of fighting games, and is always ready to enter a tournament or throw down online. Other than games, Bryan loves comic books, cooking and watching movies with his wife, and petting his two cats.