It’s impossible to tell whether or not Nintendo had high hopes for Pushmo when it was released for the 3DS in 2011, and whether or not there were any plans to turn that little downloadable title on the eShop into a full-fledged series. While the main character, Mallo, was incredibly likeable, it was still a puzzle game, which meant the actual puzzles and problem-solving aspect of the game were going to to be the driving forces behind its potential success.

With the release of Stretchmo on the 3DS, now the fourth game in the series, it’s hard to argue that Nintendo doesn’t have a successful puzzle game franchise on its hands.

The series has appeared on both the 3DS and the Wii U systems, although the gameplay of these games definitely feels more at home on a portable handheld system. Also, the use of the 3D effects actually benefit the player when looking for solutions, making it a type of puzzle game that seems to be built exclusively for the hardware it’s on. Pushmo World on the Wii U was fine, and was fun to have another platform to play the series on, but it feels much more at home on the 3DS.

Stretchmo was released by Nintendo on the eShop for the 3DS on May 14th, and interestingly enough, the release itself was far different than most games to grace a Nintendo console. First and foremost, the game seemingly came out of nowhere. No announcements were made; no previews of the title even hinting at its existence, much less what the evolution of the series would look like, were shared by Nintendo. Once it hit the eShop, it appeared as a free download, instantly raising eyebrows across the Miiverse. It wasn’t until the game was downloaded and opened that it was understood what Nintendo’s strategy was for this newest title.

The first seven levels of Stretchmo were free-to-play. It wasn’t a demo as much as it was the tutorial section of the game (that you would have to play anyway, free or not free). After completing the fairly easy free levels, the game presented several different paid options for the player to choose from if he (or she) wished to continue playing. Stretchmo is broken up into four different level packs, three of which include 50 puzzles, and one that features 100 puzzles. The smaller level packs cost $2.99, while the larger pack costs $4.99. Of course, in typical Nintendo fashion, players eager to download all four packs at once are rewarded with a special bundle price of $9.99 for essentially the entire game.

While the tutorial/free section of the game didn’t give players any feel for the four different types of levels in Stretchmo, I could imagine the first seven puzzles being a decent indication to newcomers of the series of whether or not it was a game worth exploring further. Even for those unconvinced of buying all of them, the smaller price points for the level packs felt like an easy sell to those still on the fence.

The four different level packs featured in Stretchmo are all themed differently, and the overall gameplay is consistent throughout, despite minor tweaks and additions from one group to another. The hub world of the game is designed to resemble a carnival or fair, with the four different level packs being called “attractions.” The biggest change to the gameplay of this installment, compared to the previous three titles, is the ability to pull the puzzle pieces side-to-side, essentially stretching them out to create additional ledges and platforms to use. This new ability really adds new dynamic to the puzzles, as each block can be stretched out two spaces on either side, as long as there is room to do so. I couldn’t help but think about previous Pushmo games while playing Stretchmo, wondering how past puzzles would play with this new ability. 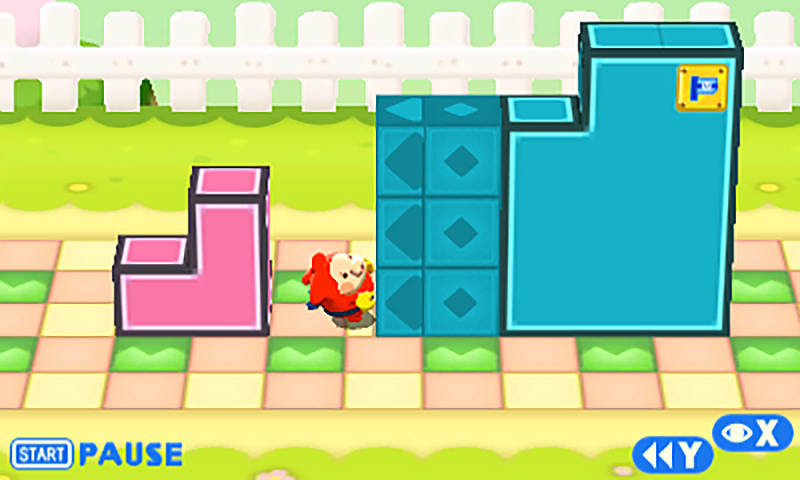 The four attractions aren’t really that different from each other, but the individual puzzles have unique themes and tend to feel original in their own respects.

The Playtime Plaza feels like the main game and it brings back the typical Pushmo-style puzzles while incorporating the new stretching mechanic.

Sculpture Square is where the game designers really get to show off how creative the puzzles can be, and it further make me realize how I’ll never be amazing at creating my own puzzles.

NES Expo is a fun place for retro gaming fans, with each puzzle resembling classic NES characters and games in fantastic pixel art.

Fortress of Fun feels like the biggest step away from the classic gameplay of the series, with enemies being included into puzzles for the first time. The enemies will knock you off and out of the puzzle while also acting as objects and tools you have to use in order to get to the goal of each puzzle. Playing this attraction makes me wonder if this concept will be the next full evolution of the series. If it is, I think it’s a direction fans of the series would really enjoy.

Going into any Pushmo game, you have to understand what you’re getting. These games have a very distinct simplistic art style and they never deviate away from it. It’s not a graphically intricate game by any means when compared to other Nintendo titles, but it’s absolutely dripping with charm and cuteness. Stretchmo features the classic style you would expect from the series, and all the puzzles are impressive works of art in their own right. The characters are fun and enjoyable, to the point where every time I see Mallo, I can’t help but wonder why he isn’t in Super Smash Bros. yet. Maybe soon, Nintendo? Please? 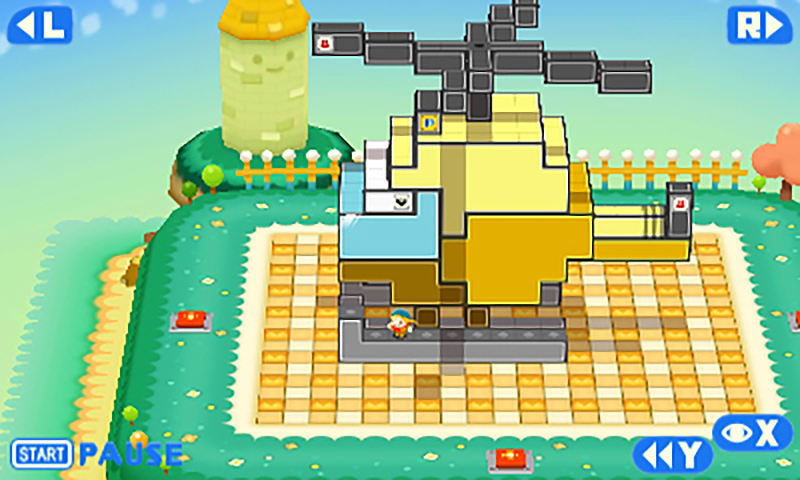 Like I mentioned before, Stretchmo really utilizes the 3D capabilities of the 3DS. Yes, you can complete the puzzles without ever turning on the 3D slider if you so choose, but being able to see the depth of each sculpture you’re climbing on and traversing around makes pixel life a lot easier– and more fun. Playing with the New 3DS system was even more enjoyable, with that eye-tracking 3D working almost flawlessly each time I’ve picked it up.

The music of Stretchmo is quite endearing, although I find myself leaving the volume turned on high more for the cute sounds throughout the game than any other reason. The music doesn’t ever take over the game and acts as the perfect, relaxing background soundtrack, which is incredibly useful when you get to the more challenging puzzles. In fact, it’s the type of music I wouldn’t mind having play in the background of any activity or chore I’m doing, simply because it’s hard to be in any sort of bad mood while listening to Stretchmo’s tracks. Listening to Mallo and other characters is fantastic, and since this game is best in short bursts anyway, their voices never get the point of being a cuteness overload.

Stretchmo is a wonderful addition to the Pushmo series for many different reasons. Since there was no hype before it was released, there were no expectations to live up to, other than the previous titles. And, after extensive gaming sessions, I can honestly say it definitely lives up to high standards set before it. The addition of the new gameplay mechanics, like being able to stretch puzzles and the inclusion of enemies, really made the game feel like a new title, not just more of the same (although, I would have been okay with that). The pricing structure of Stretchmo feels like the ideal way to get new players into the series, but for longtime fans of the game, an option from the start to buy the whole package would have been a nice alternative. I wish a level of each attraction would have been available to play for free as well, but at such low price points, I can’t imagine that oversight hurting Nintendo.

I’m absolutely happy with the time I’ve spent with Stretchmo already. My love for the game grows with each puzzle I play as I work towards unlocking the hidden level, The Perilous Peak. Even when completely stuck, taking a break and readdressing the trickier puzzles in another gaming session usually brings me right back to enjoying the adorable universe of Mallo and friends as they push and pull blocks in every possible direction.

View the official Nintendo trailer for Stretchmo below!