Earlier today, Build-A-Bear unveiled and released part of their Animal Crossing: New Horizons collection. This collab has been in the works since last year and while many Animal Crossing fans wanted to see their favorite villagers, today we were introduced to only Isabelle and Tom Nook. The duo is wearing their New Horizons Nook Inc. summer uniforms and is customizable thanks to two different audio options. Those who managed to make it through the waiting queue could order one of each plush and its audio variant (5-in-1 sound of character dialogue vs. the New Horizons theme song). For those who missed out on today’s release and don’t want to wait for the next release this summer, then you’ll want to go pay a visit to My Nintendo!

For the low-low cost of 10 Platinum Points per entry (max of three entries per My Nintendo account), you can enter My Nintendo’s Build-A-Bear x Animal Crossing: New Horizons Sweepstakes.  Five lucky winners will add both Tom Nook Summer Bundle with Opening Theme Music and Isabelle Summer Bundle with Opening Theme Music to their Animal Crossing collection! 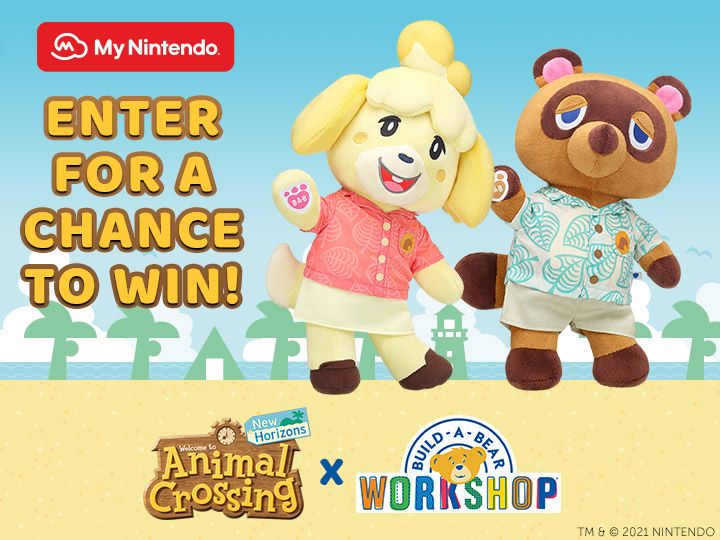 The sweepstakes is “open only to individuals who are residents of the 50 United States and Canada (excluding Quebec) and who are 13 years old or older at time of entry.” Entries will be accepted from Tuesday, April 6th at 9 a.m. PT to Sunday, April 18th at 11:59 p.m. PT. Winners will be randomly chosen around Friday, April 23rd, and notified by Friday, April 30th. For full sweepstakes rules, you can read them via a PDF that Nintendo has posted.