Despite there not being a new entry in the franchise for over a decade, the love for Capcom’s action-adventure Ōkami continues to shine brighter than the sun goddess Amaterasu. Speaking of the wolf protagonist, First 4 Figures has announced that pre-orders are now open for the latest Ōkami figure.

The Amaterasu Karmic Transformer 8 statue is a color variant of the previous Ammy statue, based on her “Shiranui’s Statue” Karmic Transformer from the game. Those who place their pre-orders before April 7th, 2021 will receive an “Early Bird” discount of $5.

Pre-orders for our Okami – Amaterasu PVC: Karmic Transformer 8 statue are NOW OPEN! Take advantage of our EARLY BIRD OFFER and save 5 USD by placing your orders before 7 April 2021, 4:00 PM HKT! Don’t miss out on this limited-time offer! https://t.co/hxW6Crv10e pic.twitter.com/FYsbxYJWgA

There’s also a giveaway for another First 4 Figures Ōkami product, the Exclusive Edition Oki (Wolf Form) statue. Entrants can earn multiple entries via the Gleam form by completing a number of actions, such as following First 4 Figures’ social media accounts and sharing the competition in various ways.

First 4 Figures also revealed Chibiterasu figures in November, based on Ōkami sequel Ōkamiden, with normal and dark variants of the protagonist pup. 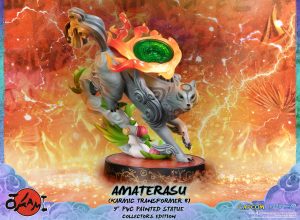 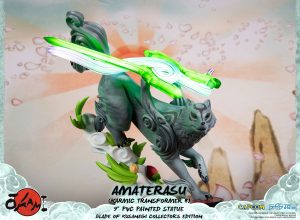