Robert A. Altman, ZeniMax Founder and CEO, has passed away at age 74

Today, Bethesda announced on a variety of social media platforms that Robert A. Altman, Founder and CEO of ZeniMax Media (a video game holding company that owns Bethesda), has died. 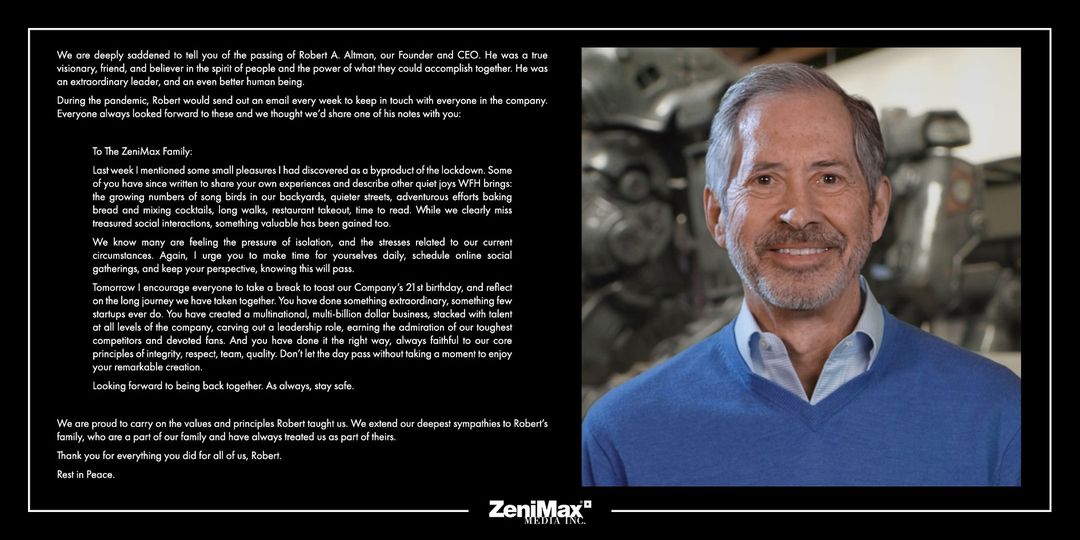 We are deeply saddened to tell you of the passing of Robert A. Altman, our Founder and CEO. He was a true visionary, friend, and believer in the spirit of people and the power of what they could accomplish together. He was an extraordinary leader, and an even better human being.

During the pandemic, Robert would send out an email every week to keep in touch with everyone in the company. Everyone always looked forward to these and we thought we’d share one of his notes with you:

To The ZeniMax Family:

Last week I mentioned some small pleasure I had discovered as a byproduct of the lockdown. Some of you have since written to share your own experiences and describe other quiet joys WFH brings: the growing numbers of song birds in our backyards, quieter streets, adventurous efforts baking bread and mixing cocktails, long walks, restaurant takeout, time to read. While we clearly miss treasured social interactions, something valuable has been gained too.

We know many are feeling the pressure of isolation, and the stresses related to our current circumstances. Again, I urge you to make time for yourselves daily, schedule online social gatherings, and keep your perspective, knowing this will pass.

Tomorrow I encourage everyone to take a break to toast our Company’s 21st birthday, and reflect on the long journey we have taken together. You have done something extraordinary, something few startups ever do. You have created a multinational, multi-billion dollar business, stacked with talent at all levels of the company, carving out a leadership role, earning the admiration of our toughest competitors and devoted fans. And you have done it the right way, always faithful to our core principles of integrity, respect, team, quality. Don’t let the day pass without taking a moment to enjoy your remarkable creation.

Looking forward to being back together. As always, stay safe.

We are proud to carry on the values and principles Robert taught us. We extend our deepest sympathies to Robert’s family, who are a part of our family and have always treated us as part of theirs.

Thank you for everything you did for all of us, Robert.

This is very sad news. Robert loved the games industry, the creators and the fans. I will miss him.https://t.co/zpLF3Itvky

Still in shock over the news of Robert’s passing. He was a visionary, a steadfast supporter and advocate of the video game industry, and kind person and friend to many of us. My thoughts are with his family. https://t.co/IjmN3g6OyI

Robert A. Altman leaves behind his wife, Lynda Carter, and their two children.

We here at Nintendo Wire extend our sympathies to his family, friends, co-workers, and thank him for his incredible contributions to the video game community and industry.