As celebrations for the 35th anniversary of Super Mario Bros. pick up steam, a few more collaborations are popping up. In the case of this particular merchandise release, Super Mario Bros. themed Barbie Storytelling Fashion Packs are appearing on Amazon ahead of any announcement from Mattel and/or Nintendo.

So yes, this isn’t a fever dream. We’re getting Super Mario Bros. merchandise for Barbie this November and this isn’t the first time that the doll has sported Nintendo-themed accessories (more on that later). Initially spotted by Twitter user @Wario64, Barbie will be able to add the following three Fashion Packs to her never-ending closet. 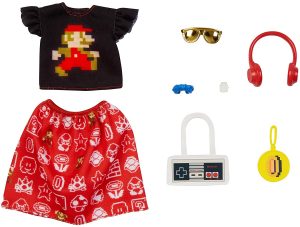 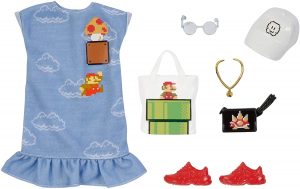 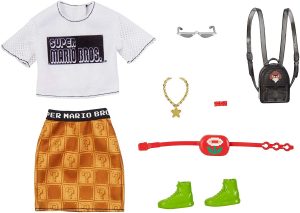 Releasing on November 4th, 5th, and 7th according to Amazon.com, each Fashion Pack is $9.99 and comes with an outfit (dress or top and skirt combo) and six accessories. There’s no packaging or labeling available that directly ties this collab to Super Mario Bros. 35th Anniversary, but all the imagery used in these sets are from Mario’s time on the NES.

Plus, in a previous Nintendo clothing release for Barbie, the artwork used was of today’s version of Super Mario Bros.’s main cast. Those pieces were released in 2018, and were limited to individual clothes and outfit sets featuring Mario, Luigi, Bowser, Peach, Yoshi, Toad, and more! So, this collab isn’t exactly out of a random warp pipe.

Currently, Amazon.com is the only online retailer accepting pre-orders for the sets. Provided that pre-orders are still being accepted, you can order the following sets by clicking the links below:

Hopefully, we’ll see more items and a formal announcement from Mattel within the next few months. Big anniversaries tend to warrant special releases, and it would be awesome to see a special doll release (or two).