A mysterious Sonic statue in the Japanese mountains has been restored

Deep in the mountains of the Mie Prefecture in Japan, there sits a statue of Sonic the Hedgehog on a snowboard, suspended above the ground by trees and wires. By the time fans found it in 2015, it was already in pretty rough shape; its paint had faded severely, moss was growing on it, Sonic’s nose was missing and the statue had begun to crack.

Little was known about the statue for years after its discovery by fans, outside of the fact that it appeared to be from a Sega World Arcade somewhere in Kadoma. In fact, it wasn’t until February 2019 that its exact location was made public out of fear of vandalism or theft. At that time, the prevailing story given by locals in the area was that the statue was somewhere between 10-15 years old, and had been donated by farmers and industrialists who operated in the area. However, just two months later, the truth was revealed.

The statue did, in fact, have an owner: the late Mr. Yuji Kodera, who actually lived in the woods behind the statue. The statue was from the Sega World Arcade in Kadoma City, and was due to be thrown away when the building was being renovated. Mr. Kodera decided to take it home instead, and use it as a marker outside of his property. His house was deep in the woods, and its entrance was so obscured by trees that visitors would accidentally drive right past his house and get lost. To avoid this, he set up the hedgehog statue and would tell his visitors to look for Sonic to find him. 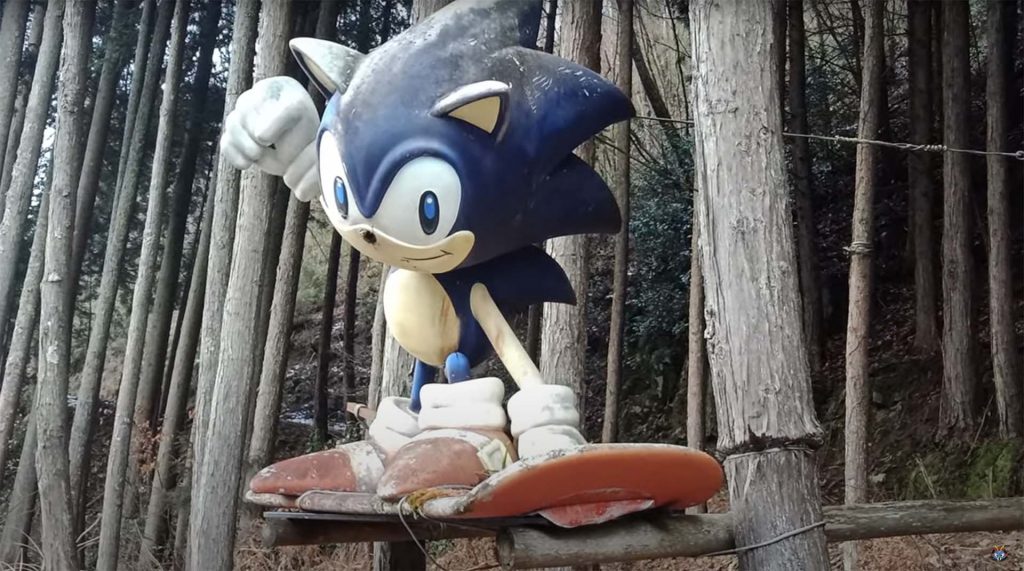 Mr. Kodera’s children were interviewed by local reporters, and they shared how their father was a kind and caring man, who invited people in the area to enjoy the statue with him. His children lamented the dilapidated state of the statue, and expressed their desire to restore it to its former glory. A little over a year later, and that desire has become a reality. The statue is now fully repaired and sports a fresh coat of paint that glistens in the sun!

Mr. Kodera put up the Sonic statue both as a marker for his house, and for the enjoyment of his neighbors. Little did he know all these years later that his statue would be enjoyed by people all over the world. Legacy is a funny thing in that regard. If we strive to be kind to others in all we do, even with something as simple as putting a statue up to make people smile, that positivity can have a ripple effect that continues spreading long after we’re gone.

We’d like to extend a special thanks to YouTuber Badnik Mechanic, whose thorough coverage on the mystery and history of the statue over the years helped make this article possible. He’s produced multiple videos on the subject, and has organized them into a playlist for ease of access.