On Friday October 18th, the UK’s first Pokémon Center opened its doors to the public. Situated in the Westfield Shopping Centre at White City, London, the pop-up store will be operating until November 15th, and for all intents and purposes it has been a resounding success for the Pokémon Company… But not so much for the casual consumer, so far at least.

Lines were always expected — the official website warned fans to anticipate a wait — but, as Westfield reported after the first day, it had blown any previous records out of the water. Fans were waiting for hours in a queue that wrapped around the shopping center, as fans slowly trickled into the shop that was limited to only a few people at a time.

The interest in the shop launch has been unprecedented- we’ve never had a queue this long before. We’re grateful for your patience and understanding as our team endeavoured to keep the line moving throughout the day 2/3

I personally went on the Saturday. Knowing there would likely be a heavy queue thanks to the reports from opening day, I made sure to get there by 8 a.m., and at first all signs were good. The line outside didn’t stretch too far, and while we knew other people were inside the shopping centre — two hours before it would typically open — the assumption was that we wouldn’t have too long to wait. We couldn’t be more wrong. 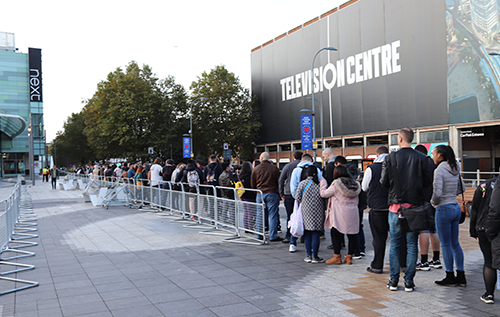 The store’s doors opened at 10 a.m., and that’s when the waiting game truly began. An hour passed before our line saw any movement, and it was a mere ten people who were shuffled inside. Another 45 minutes passed, and another ten people went in. I’d wager there were at least a thousand people waiting outside at that point. With plans to head to the EGX expo that same day, I had to eventually abandon my spot, but it afforded me the opportunity to scout ahead and see what the hold up was.

It turns out the small queue we expected to see inside was instead a winding trail of people who had likely been waiting since the earliest hours of the morning, though thankfully it was segmented so casual shoppers could still go about their business at other storefronts. The true frustration was knowing that I, and the others who were waiting outside, were being given very little information by the Westfield staff. Unless you were standing next to one of the representatives, you’d have to either abandon the queue to ask them for an update, or head inside yourself for a recon mission, potentially losing your coveted spot.

Then there’s the fact the store itself was reportedly facing stock shortages, with shelves apparently being laid bare by the time late-comers finally got in. I’m almost glad I left early and avoided the heartache of missing out on a Scorbunny plush.

Now, why was the queue so long? There were presumably many factors, but I have to imagine the playable Sword & Shield demo was a big reason why the movement was so slow, and I’m still baffled they decided to include it for opening weekend. They also implemented a purchase limit of 6 items after the first day, which, from experience, I can’t really say helped matters much.

One thing that did shine through, however, was the community. The patience of the Pokémon fans I saw waiting in line was unreal; even with such a slow wait ahead of them, it was mostly smiles all round, as groups of friends chilled out on the cold pavement, talked with their neighbours, and generally celebrated all things Pokémon.

The London Pokémon Center will be around for a few weeks yet, and it’ll likely become more manageable as the early rush dies down, but for a first impression it was mostly sour. I can only hope the considerable amount of interest shone on the store gives The Pokémon Company or Nintendo the incentive to invest in a more permanent location in the region. Until then, at least we’ll have memories of dapper Pikachu to keep the dream alive. 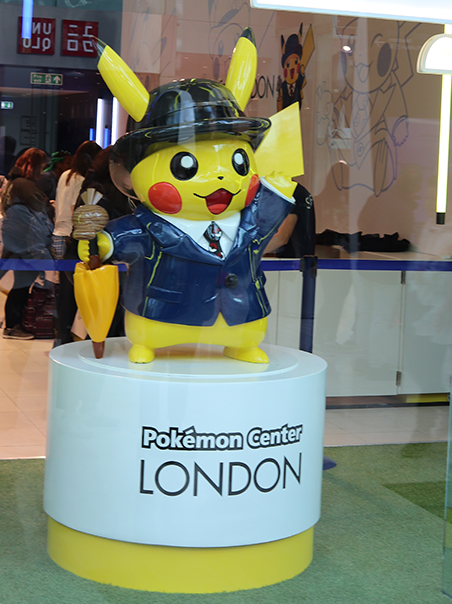