Super Nintendo World may not be due ’til next year, both in Japan and the US, but some new details about how you’ll be enjoying the Mushroom Kingdom for yourself have come to light. Universal Parks CEO Tom Williams was asked about the upcoming expansions at a recent event, and his response has been transcribed and unedited below:

We are going to open up next spring. It’s a whole new separate area of the park. It’s got food. It’s got merchandise. The first phase will have two rides, Super Mario Kart Ride and as well as Yoshi’s Adventures. Yoshi is one of the other Nintendo characters. There will be two rides. The whole land is interactive. And you are going to have a wristband that’s got the big red Mario symbol on it.

By the way, the wristband is super cool. It’s all magnetic. You slap it at your wrist and it just snaps on and it won’t come off. And that allows you to, on an interactive basis throughout the entire land which is built on three different levels. It’s got all the popular Bowser’s deal and Princess Peach’s Castle and all the different key elements. And you will be able to go up and keep score and play with the various games and that also translates to a score keeping capability, if you choose to do so within the rides and it actually interfaces back with your game console. So you can build on it and come back again and really got everything going for it.

The biggest revelations here (aside from Yoshi being “one of the other Nintendo characters”) is that red Mario wristband. The magnetic band will offer up a whole new degree of interactivity, keeping score across games and rides. It’s also stated that the bands, and therefore the entire park area, will also interface “…back with your game console.” While nothing has been formally announced on that front, it does play to the Switch’s portability and capabilities, not to mention (potentially) Nintendo’s continued steps with respect to mobile applications and games. 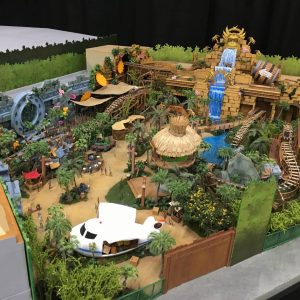 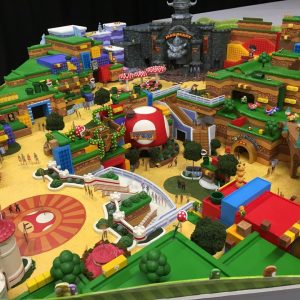 Also keep in mind that the “…next spring.” mentioned in the transcript is in reference to Universal Studios Japan. When asked about America, Mr. Williams declined to give a window in order to avoid deferring attendance, but reassured that Super Nintendo World is on the way.