Go back to school with Nintendo themed Lunchables

With September creeping around the corner, the season of school is pretty much here! And for many kids, that means new fall clothes and new school supplies are imminent. That’s not all that awaits the new year though, not with Nintendo making waves in every corner of the universe!

Nintendo’s just announced that it’s partnering with Lunchables to bring beloved characters to the forefront of all cafeterias starting this September 1st, and running through November 30th. The likes of characters from Super Mario Maker 2, Yoshi’s Crafted World, Mario Kart 8 Deluxe, Pokémon Sword and Shield will adorn the specially marked Lunchables packaging. 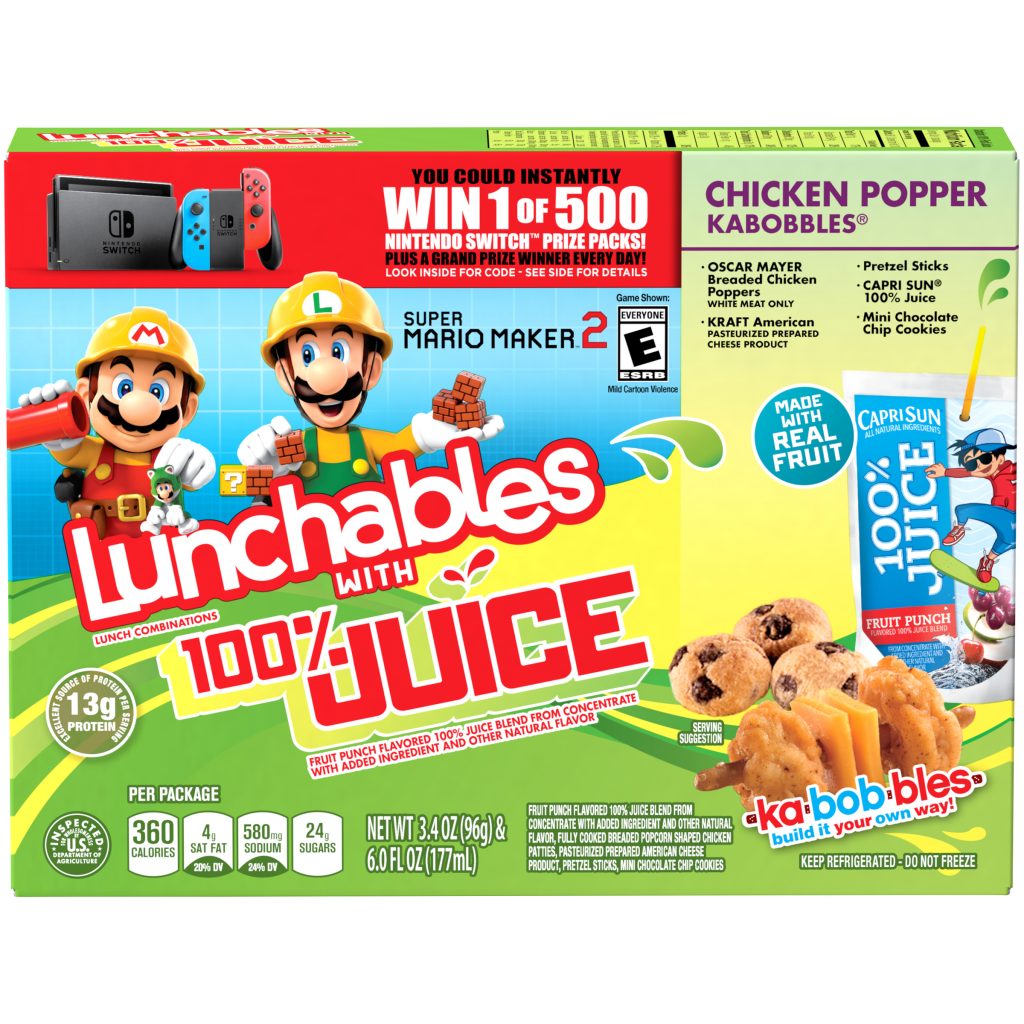 So far, we’ve been given a small glimpse at what we can expect to see on the front of the package (as seen above). The characters are seen among a promotional giveaway ad and the delectable contents inside. It looks like kids will enjoy some chicken popper kabobbles with chocolate chip cookies and cheese in the Super Mario Maker 2 pack!

Sweetening up the food combos even more is the added bonus of a My Nintendo code inside each Lunchables package. The code can be redeemed for the chance to win a prize package or 100 Platinum Points:

“These Platinum Points can be redeemed by My Nintendo members for exclusive digital placemat activity sheets, name tags or other fun Nintendo-themed rewards. One grand prize will be given away each day of the promotion – that’s 91 total grand-prize packages! The grand prize consists of a Nintendo Switch system and a digital collection of 12 Nintendo Switch games, including Mario Kart 8 Deluxe and The Legend of Zelda: Breath of the Wild. Hundreds of other great prize packs, which include a Nintendo Switch system and the choice of two physical Nintendo Switch games, will also be awarded during the promotion period. To enter the LUNCHABLES Mixed-Up Gamers Giveaway, just pick up a specially marked package of LUNCHABLES featuring Nintendo video game characters on the package and visit https://www.lunchablessweepstakes.com/ for more details**.

**NO PURCHASE NECESSARY.  MANY WILL ENTER, FEW WILL WIN. A PURCHASE WILL NOT INCREASE YOUR CHANCES OF WINNING.  LEGAL RESIDENTS OF THE 50 UNITED STATES (D.C.) 6 YEARS AND OLDER. VOID WHERE PROHIBITED.  Instant Win Game ends 11/30/19. For Official Rules, alternate method of entry, prize description and odds disclosure, visit lunchablessweepstakes.com.  Sponsor: Kraft Heinz Foods Company, 200 E Randolph, Chicago, IL 60601. Nintendo is not a sponsor, co-sponsor or administrator of this sweepstakes.”

Keep in mind that a My Nintendo account is required for this part of the promotion. Visit the Terms page for My Nintendo to view more details.

You can learn more about Lunchables by visiting their website — both kids and parents pages are offered, providing each age group with a different browsing experience.

While seeing familiar faces like Mario and Yoshi on Lunchables packaging is no surprise, it’s no less a treat for the eyes! Will you be picking up any of these? Let us know on Twitter!