The famously-Kickstarted Shovel Knight is returning to the crowd-funding platform — this time in the form of a miniatures board game, Shovel Knight: Dungeon Duels.

From the press release:

Each player plays as a different colored Shovel Knight, and will be shoveling out justice in spades against the evil Order of No Quarter while trying to grab the most treasure to prove that they are the one true Shovel Knight!” 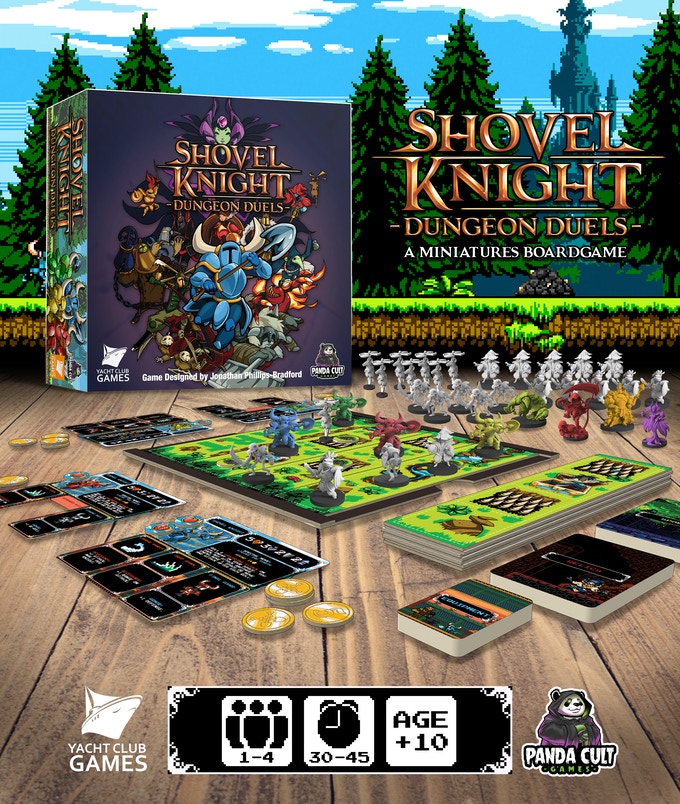 Interested backers can pledge $70 or more as part of the “Shovelry Pledge,” which will earn them one copy of the board game, a Shield Knight model and hero card, and “all applicable stretch goals.”

In each box of Shovel Knight: Dungeon Duels comes:

Multiple stretch goals have been planned “depending on funding,” with extra content added directly into the core box.

One so far has been outlined: By reaching $90,000 in fundraising, playable boss hero pieces of Specter Knight, Plague Knight, and King Knight will be put into Shovel Knight: Dungeon Duels.

According to the Kickstarter page, the game is played by trying to gather the most gold through defeating enemies, digging up treasure mounds, hurting bosses, or by taking them from a rival Shovel Knight.

Players can also enjoy other “unique elements,” like side-scrolling tiles, equipping armor and accessories, jumping over spiked pits, and fighting the Shovel Knight video game’s Order of No Quarter.

Established in 2017, Panda Cult Games is best known for Kickstarting a line of miniatures called “Wander,” along with a later board game centered around it, “Wander: The Cult of Barnacle Bay.”

The game is expected to ship next year.