Yesterday we bore witness to the reveal of Dr. Mario World, the upcoming match-3 puzzler that we all kinda forgot was coming but then remembered that hey, yeah, it’s a thing. Even if the gameplay has garnered some mixed feelings across the board, the game’s polish and visual design is up to Nintendo mobile par — and it’s bequeathed upon us a whole bunch of new renders of Mario characters with MDs. Do they give medical licenses out like candy in the Mushroom Kingdom? I would hope not — if you need a life-critical mycelium transplant, you deserve only the best of the best. That’s why we’ve taken on the task of rating each of the game’s doctors on the factor of pure visual indication. 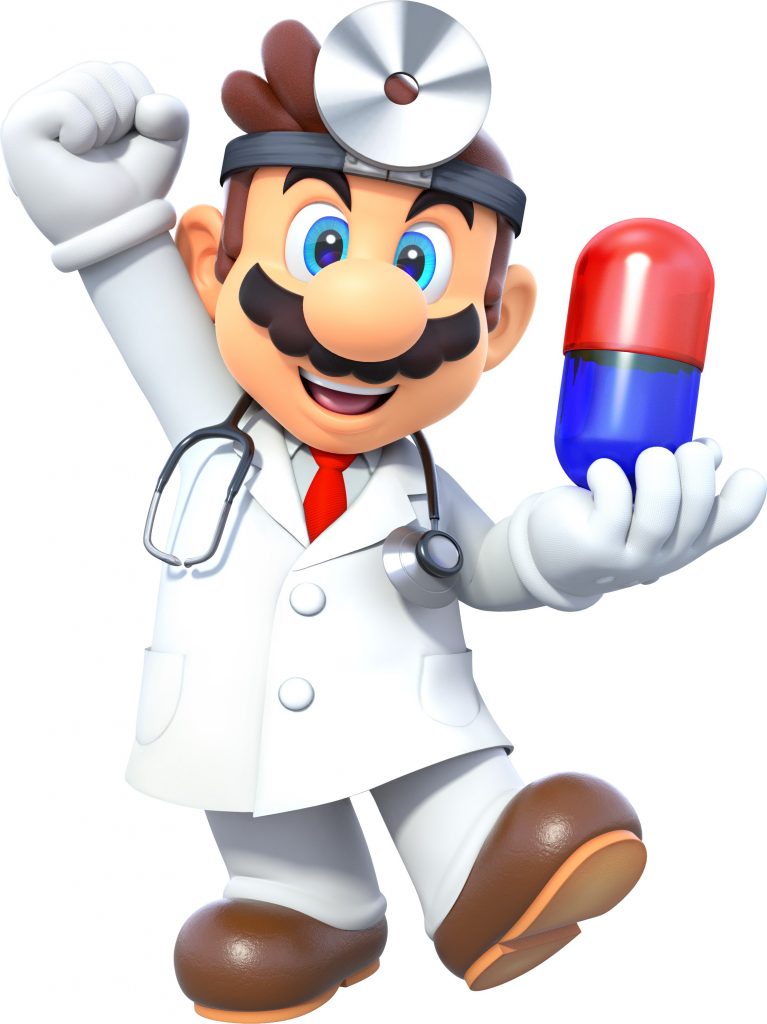 First off, we have the titular not-plumber. Mario’s been in the medicinal business longer than his peers, which means he has a lot of experience, but he strikes me as the type to be set in his ways. Maybe he hasn’t studied up on the most recent medical advances, maybe he’s not up to date on which procedures are safest, or maybe he’s just plain complacent. He’d definitely do a fine job, but something tells me, like in every other Mario spin-off on the face of the planet, he’d just be kinda average overall.

Rating: 3 out of 5 – Mario will get it done, but you might spring a leak later on.

Specialty: Intensive Care – Given how frequently he dies, Mario has become accustomed to emergency care and understands the particulars. 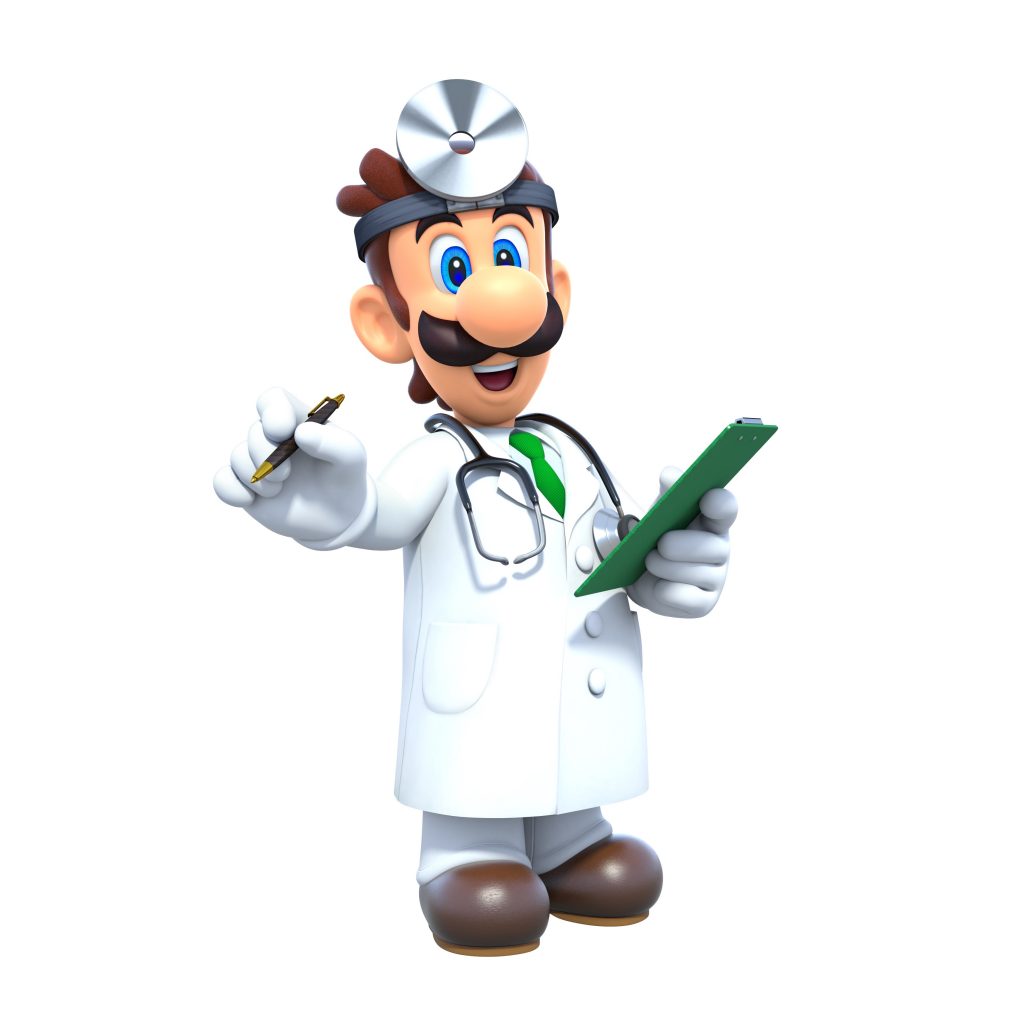 Then we have his brother, Luigi. Compared to Mario’s 30-odd years of doctoral practice, Luigi hasn’t even been a practicing physician for a decade, which would appear to be a point against him. However, Luigi’s much more up to date on his procedures, a much more diligent and honest fellow, and just a friendly guy all around. Not to mention that he’s got a clipboard in hand, which seems more orderly and thoughtful than the pill Mario wants to cram down your throat. That said, on doctor review sites, he’d get a lower rating, purely because of factors out of his control.

Rating: 4 out of 5 – Luigi will fix you up proper and good, even if everybody else says that Mario is the man for the job.

Specialty: OB/GYN – It’s been shown recently that the ladies love Luigi, and I imagine a reason for that is he provides quality care for feminine needs. 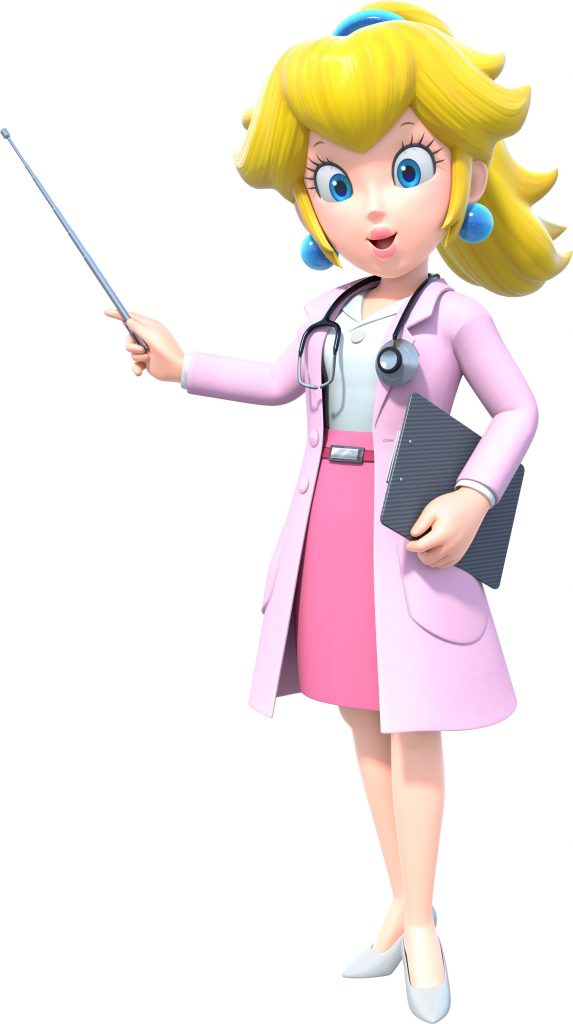 Now here’s a medical professional. I just want to say how nice it is that Peach got her M.D. after years of nursing — it couldn’t have been easy, especially as a woman in a male-dominated field where octogenarian hospital directors who probably call her “sweetcheeks” tutted and tsked her efforts. But now she’s shown them up, and she looks both professional and lovely in her doctor’s attire. The only downside is that she’ll ask you for a high premium due to her royal standards of wealth — unless the Mushroom Kingdom has socialized healthcare? That’s a question for another day…

Rating: 5 out of 5 – A hard-working veteran in multiple fields, Peach is courteous, understanding, and proficient.

Specialty: Psychiatry – As a frequent prisoner of war, she understands the weight and heaviness of mental issues well. 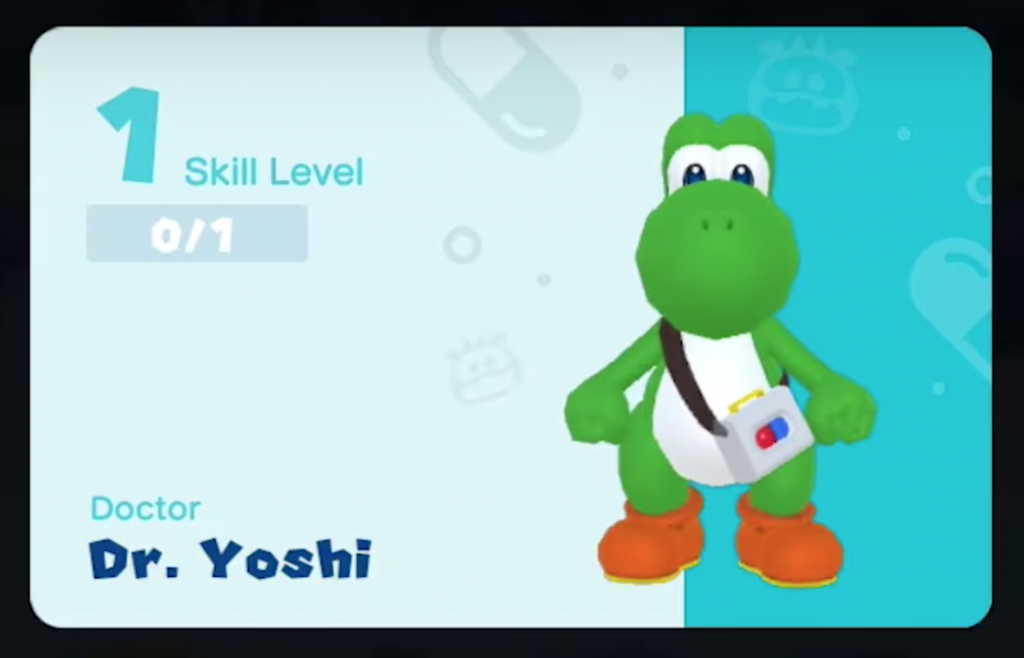 Okay, so… I’m a Yoshi fan, always have been, always will be… but what is he doing here? The green dino just has a first-aid kit with a pill stamped on it. That doesn’t make him a doctor, it makes him a pharmaceutical salesman or a lifeguard. He’s not going to know how to treat your kidney stones – he’ll just tell you to eat until you feel better. Not to mention I question how much a dinosaur knows about human or mushroom anatomy. Skip this quack.

Rating: 1 out of 5 – He’d try to band-aid your appendicitis and amputate a scraped knee. Stay away!

Specialty: Gastroenterology – I don’t think I have to explain this one. 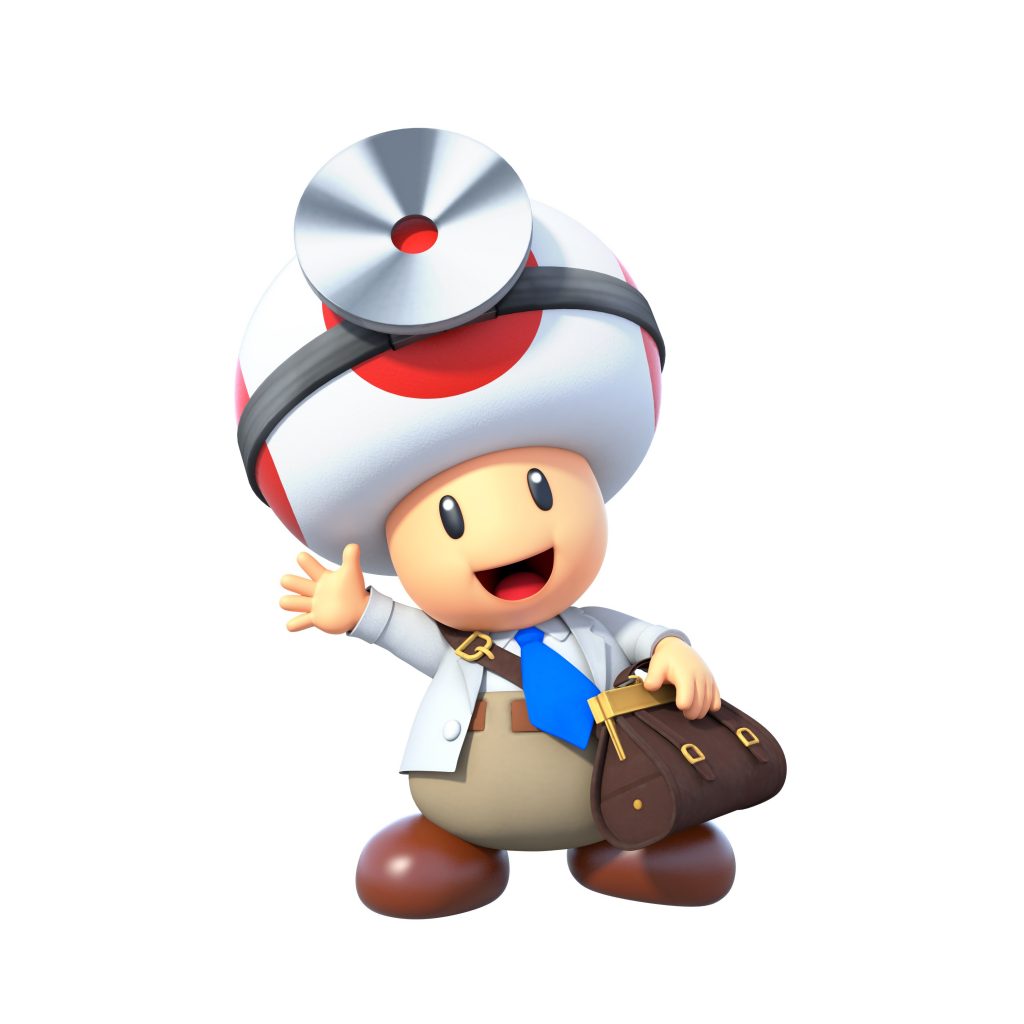 Toad is usually a bystander, a passerby, the guy you operate on. But here — not gonna lie — he gives off a lot of protagonist energy. Eager, a bit overdressed, but with all the tools to get the job done. He’s the John Dorian of this escapade, a wide-eyed rookie who makes up for his lack of experience with youthful ideals and gumption. He may mix up your spleen with your spine, but when it comes to making sure you’ve got the proper treatment he’ll stop at nothing to make it happen.

Rating: 3.5 out of 5 – His hands with the scalpel are shaky, but he makes a clean cut. Can be even better someday.

Specialty: Neurosurgery – Should probably understand how the brain works due to the enormous size of his cranium. 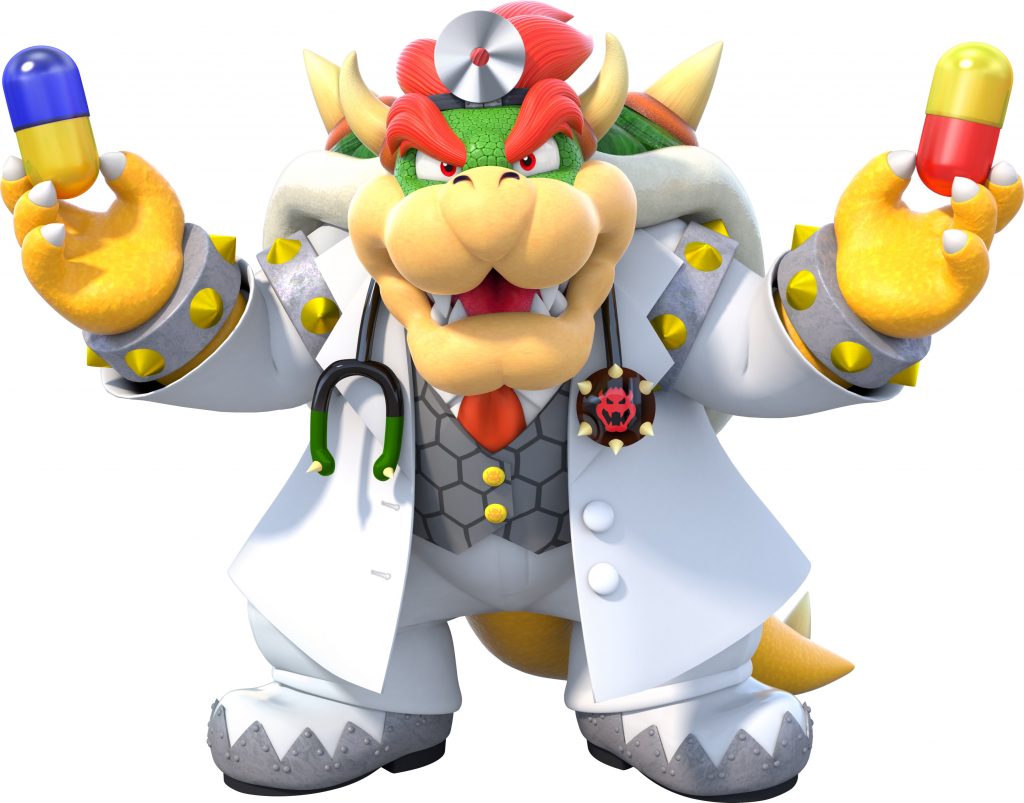 Given that he may be the reason you’re in the hospital in the first place, it would seem dubious to take medical advice from this spiked dragon-turtle. But Bowser presumably knows at least a little of the doctoral work — he’s savvy enough to keep kidnapping Peach, and I’d imagine at least a little of the diligence carries over to medical work. That said, he’d be real bad at following the Hippocratic Oath. Not to mention he’ll probably try to up-sell you on whatever medicine you need. You can probably do better.

Rating: 2 out of 5 – Is probably decent enough at the job, but carries a lot of unknown risks.

I’m sure we’ll be evaluating whatever other doctors the Mushroom Kingdom Medical Academy offers licenses to. In the meantime, you can check out Dr. Mario World when it releases July 10th.