Kirby’s Epic Yarn might be the cutest game ever made. When it was revealed and released on Wii nearly ten years ago, hearts everywhere melted at the sights and sounds of a game where danger was low and charm was high. It may not have been the most “Kirby” game around when it came to design, but it left enough of a mark on the franchise and wove in perfectly with its varied history of titles in ways that made it so we’re still feeling warm and fuzzy over it to this day.

Nintendo must’ve noticed, because I’ve spent the last week falling back in love with the game on 3DS thanks to Kirby’s Extra Epic Yarn. While none of the main thread work of the game is frayed, a few bits and baubles have fallen away, and some patchwork’s been sewed in place to try and both address the minor complaints of the original and make things feel a little more familiar to Pop Star faithfuls.

Spiral and shimmer into a wonderfully crafted game

Extra Epic Yarn’s story draws Kirby out of Dream Land and into Patch Land, a woven world of yarn and wool, due to the work of a sneaky wizard named Yin-Yarn. Right away you meet and befriend Prince Fluff, who sets about showing you the ropes (threads?) of this strange new world where the ground feels like pants. Thanks to the transformation, Kirby can’t inhale like normal, but soon he’ll be taking advantage of his transition to twine to set out and piece Patch Land back together. 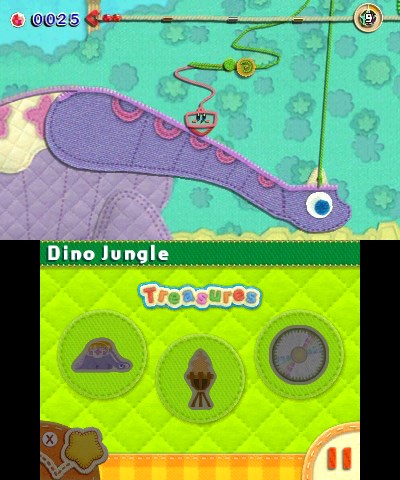 It’s light on plot, but between worlds you’re treated to soft-spoken narration of Kirby and Fluff in cute scenarios, with other characters popping up occasionally. Every time you beat a boss you get the thrill of hearing “We did it! We got the magic yarn!” in a voice made for children’s television — I’m smiling just thinking about it. Though not as compelling or thought-provoking as Kirby games can be with their supplementary information and starlit lore, this makes for an adventure anyone can understand and enjoy if they can handle the risks of sweetness overload.

And it really is an adventure anyone can play, as this is a game as simplistic as it is soft. Even with his floaty abilities gone, the platforming here is never too tricky for Kirby, and if you do happen to take a tumble down a bottomless pit, you’re pulled right back out to try again. Using your yarny body to whip enemies and pull them apart is satisfying due to some fluid animations and sound design; and thanks to the more pliable form, Kirby’s able to transform into various vehicles (and a dolphin, and a surfing penguin) to get through special sections. The only real goal is to get from start to end, with rewards coming if you gather up enough beads to meet extra goals that can then be spent on other parts of the game. 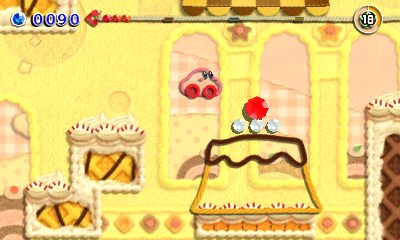 Most of that sounds pretty typical — but the game still stands out, as Patch Land’s quilted corners are a sight to behold, especially when you start to pull on buttons to access new spots, cinch the world together with your yarn whip, and walk around behind layers of fabric to get around. Every world has its own motif, taking you to scarf-like quicksand, cotton ball snow, and toys and sweets bigger than you. It’s enough to get you hunting down the hidden treasures in each stage to decorate Kirby’s very own apartment back in the hub. Add in a gorgeous soundtrack based primarily on light piano tunes and Kirby’s own voice chiming in as you explore, and you’ll be in handcrafted heaven the whole way through.

Unraveling the original and patching in the new

Everything said up to this point could apply to either version of the game, and what’s covered there is just as great no matter the system you’re playing it on. What sets the 3DS apart is its new abilities and features, though sometimes more isn’t always better. While the ability to take the game anywhere on 3DS is welcome, I can’t help but wish the game had been released on Switch. Gameplay’s fine, but some of the texture effects are lost due to the smaller screen and lower performance overall, which is a shame when this is one of my favorite games to take in and enjoy every step of the way.

The most prominent addition are Kirby’s Ravel Abilities. Each of these models itself after one of Kirby’s more traditional copy abilities but with the same crafty designs as the world around him. In select stages you’ll find shiny new hats that let you wield wire; like a paperclip swordsman, toss button bombs, and fling around bobbins and marking pins for longer ranged and more impactful attacks. 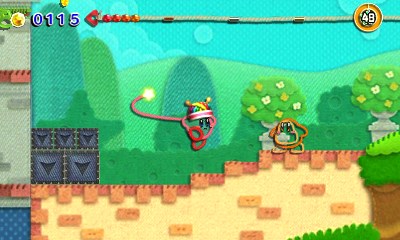 They fit in well stylistically and make the game feel a little more Kirby than than the experience did before, though they also have a habit of trivializing the level design by letting you get through tough sections a little more cleanly. Stages weren’t designed with being able to attack at any time or with double-jumping in mind — though if you want a “pure” Epic Yarn experience it’s as easy as ignoring the power-ups. Still, they’re too dang cute to dislike and make any trip through an old, favorite stage even more stress-free.

They’re also the focus of the game’s amiibo support. By tapping in a Kirby character you’ll summon up not just a Ravel ability, but one with a special hat. Whether you want Kirby to be able to knit together yarn balls on command or you just think he looks better in a Waddle Dee hat, you can make it happen. It’s convenient, but still continues the trend of amiibo features feeling lacking in more current games. At least here that ‘Extra’ status makes sense, what with amiibo not existing during the Wii years, and it doesn’t lock anything non-cosmetic behind a line of figures no longer in stores. 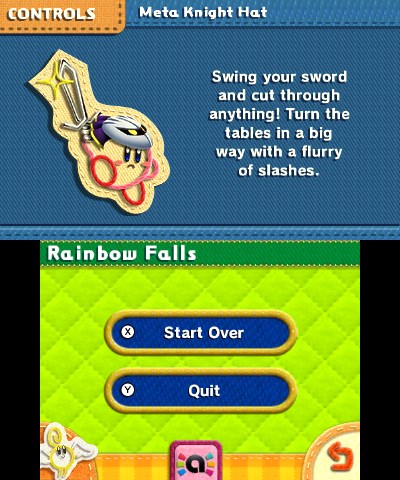 One of the biggest criticisms I’d always see for Epic Yarn’s first pass was just how low the difficulty was. Still, I’ll stand by that design element as part of the series’ charm ’til I die, even if it’s impossible to die in the standard stages. Extra Epic looks to fix that by introducing its new Devilish Mode. The layouts of stages don’t change when you toggle on Devilish, but Kirby will now have five finite hit points to get him to the end.

Depending on the stage you’re playing, that just means watching your step a little more carefully or something more frustrating than difficult. Not because you’ll need all five of these hit points, but because of additional rewards that come along based on a game-wide tally of how many hit points you had at stages’ end. To put it another way, to get everything you have to ace every level. Not impossible, mind you, just more tedious than the previous bead based requirements for top marks.

That’s not the only thing making this mode impish, though. As you waddle along the stage will be invaded by a persistent devil enemy dead set on chipping those hit points away. You can try to dodge them, or land a well-placed hit to shoo them away for a while. It’s one way to make things trickier, but with the Ravel abilities it’s never too hard to keep them away (with the exception of stages where Kirby’s transformed and can’t attack on command). Probably my biggest complaint though? They override the music with their own theme and silence the sweet songs of Epic Yarn, which is the most sinful thing about these fiends.

Two subgames starring Dedede and Meta Knight have made their debut as well. They’re fun distractions, with Dedede dashing through stages as fast as he can and Meta Knight cutting through everything in sight. Both of these are sources of a new kind of bead to create new furniture and decorations for Kirby’s apartment. There are only a few stages to each of these though, with replayability feeling more like a matter of grinding — so anyone looking for anything on the level of a Meta Knightmare or Dededetour is out of luck. 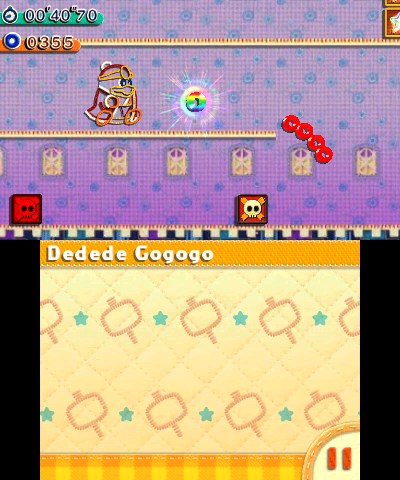 Still a star in my eyes

Kirby’s Extra Epic Yarn was the perfect excuse to give the game another go, and thank to its handheld nature it’s easier than ever to get all comfy-cozy and wind down in Patch Land. All things considered though, I prefer the Wii original as-is because of its simplicity. Even with a lot of the new content being optional or avoidable, the loss of screen real estate on the handheld and the Wii’s seamless multiplayer being left out on 3DS makes this only the second best yarn based Kirby game you can play. And that’s still a compliment.

If you ever want to see what made Epic Yarn so special but just can’t let go of your 3DS, this Extra version can still weave its way into your heart. More Kirby stitching and challenges have made their way into the fabric of this release, with no loss of its wholesome charm. 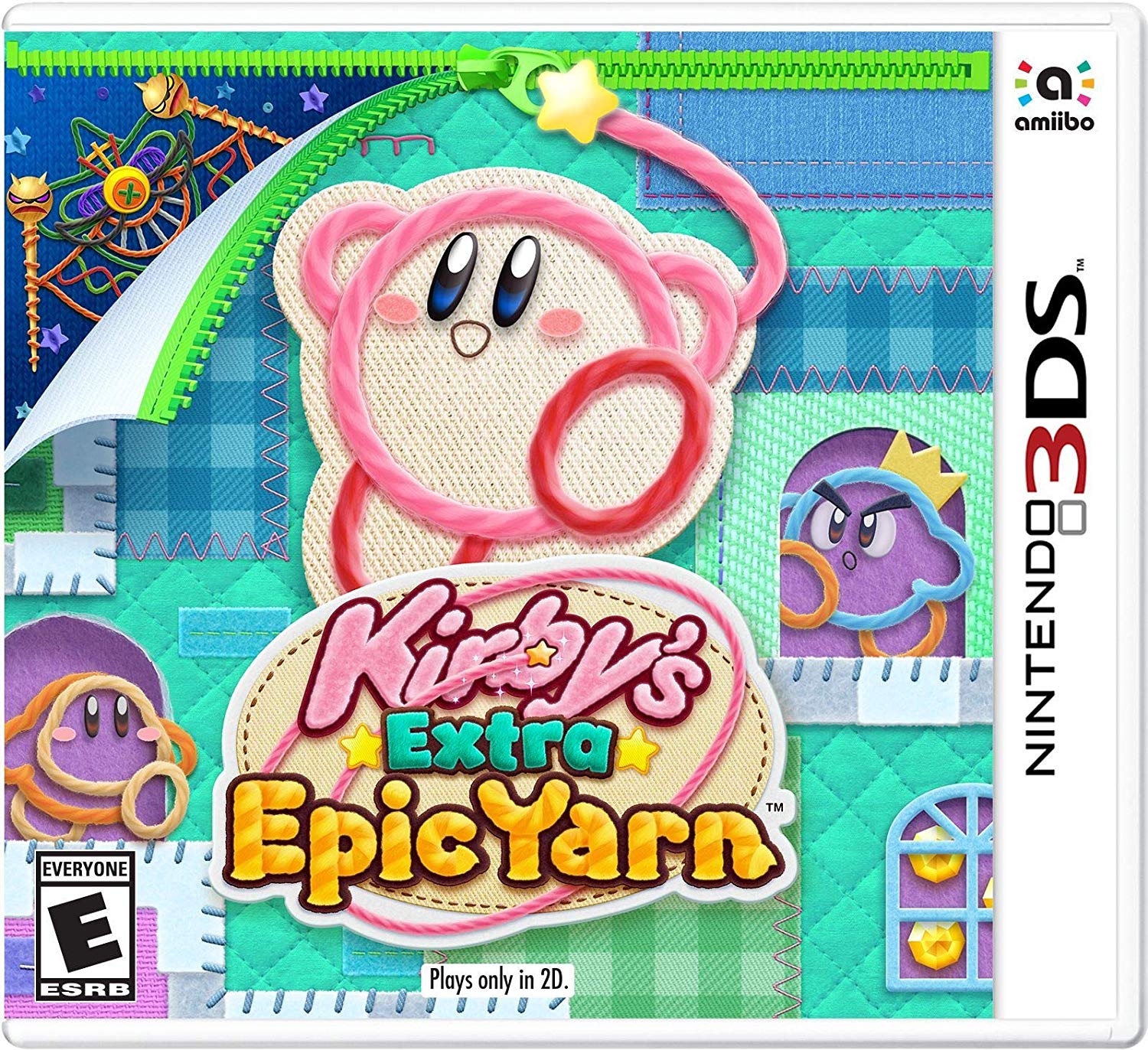