We’ve been slowly receiving information about the upcoming Eevee Tamagotchi that’s scheduled to release near the end of the month, and it looks like a few more tiny details have come to light.

Thanks to Tama-Palace and the TamaTalk forums, we got word that Bandai Namco has revealed the names of the two Tamas: ‘Love Eevee’ and ‘Colorful Friends’, both sporting different shell designs (as we previously saw) — yet the two will contain the exact same content. Just as we were shown a few weeks ago, Eevee will hatch from an egg in pure Tamagotchi fashion, you’ll be able to feed it and play games with it, and then sometime along the way Eevee has the chance to evolve into eight variations (Eeveelutions). An updated chart of the evolution process has just unveiled that there are also three mystery evolutions that have not yet been shared by Bandai. 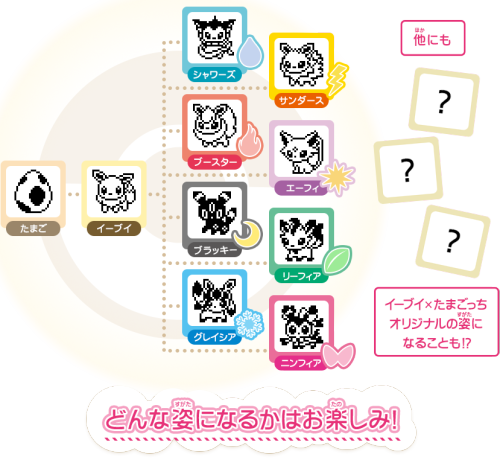 It’s important to note that the Eevee edition is not as intricate in design as a full-fledged Tamagotchi model. If you’re familiar with the Nano that was first introduced to the world years ago, or the Gudetama Tama that recently released at GameStop locations, you can expect the Eevee version to fall in that genre of virtual pet. It’s a lot more simplistic when it comes to functionality, and the overall size is significantly smaller than regular Tamas. 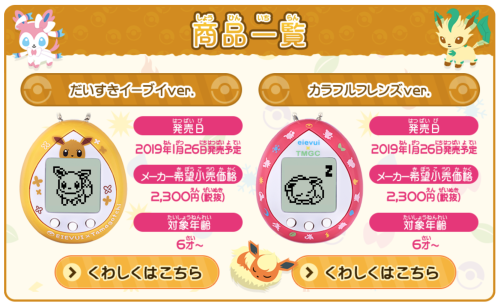 The Eevee Tamagotchis are still scheduled for release on January 26th for 2,300 yen (approximately $20).