From an American perspective it’s easy to follow the key points in Fire Emblem’s road to becoming one of Nintendo’s more notable series. Marth and Roy’s surprise Smash inclusion raised awareness and eventually let to a near and dear game getting brought to the West – what’s now known as Fire Emblem: The Blazing Blade. Now the songs and sounds of that game, as well as Roy’s own (and still unlocalized) tale The Binding Blade will be available together in one soundtrack collection in Japan.

The collection is housed in a special box with a new illustration featuring main characters Eliwood, Lyn, Hector, Roy, and Lilina, courtesy of Sachiko Wada, the original artist and designer for the games. It contains over six hours of music, with two discs dedicated to Binding Blade, and another three for Blazing Blade. Both games will also have a short, dedicated full color booklet. 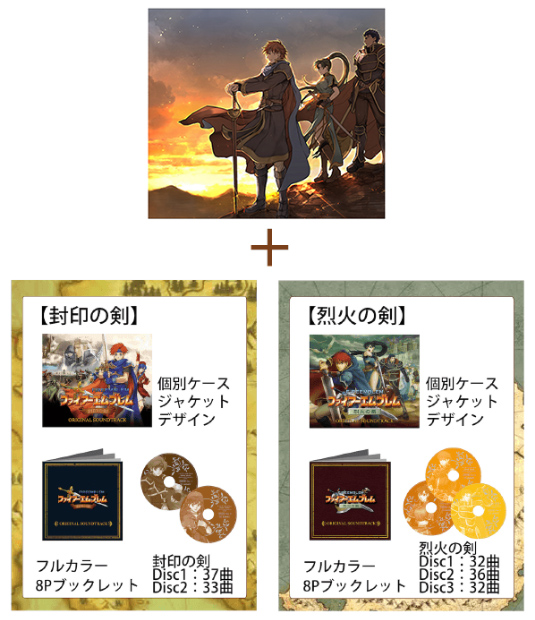 Two special extras are also in this set. One is a bonus disc called “Fire Emblem: Music Box ~Binding Blade/Blazing Blade~” which will feature ten tracks from the pair arranged in a music box style. The other is a Sound Rubber Strap, decorated with the sprites of the five main characters already mentioned that will play various sound effects when pressed.

The set will be releasing later this year, on December 19th and will sell for 5200 yen. While a localized release is unlikely, those looking to own this set can rest assured we’ll be keeping an eye out for how you can order it yourself.