Non-stop updates have been rolling out for Animal Crossing: Pocket Camp ever since its release last November, and it doesn’t look like they’ll be slowing down anytime soon — to the delight of many, including myself! As seen in the latest notice within the app, it looks like Nintendo’s adorable, animal-filled game will be getting a fishing tournament in the near future.

If you’re familiar with the Animal Crossing’s 3DS game New Leaf, then you might already have somewhat of an understanding how these tourneys are run. Cheerful beaver Chip assists you while you compete against surrounding animals to catch the best and biggest fish in both rivers and oceans. In Pocket Camp, delivering them to Chip will earn you clothing and furniture as rewards, all based on the number and size of the fish you deliver. The rules and expectations might be changed up a little bit for the Pocket Camp version of the minigame, but it should be a good time regardless! 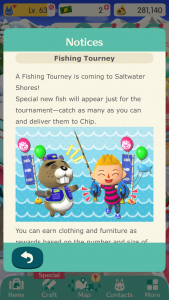 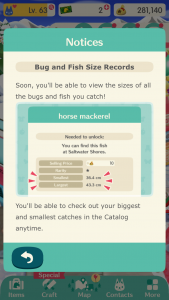 The following information comes courtesy of redditor SenorDeebs, who was kind enough to look through the game’s latest update files. They discovered the following:

More new villagers and an appearance by the garden center’s very own sloth, Leif, are expected to pop up. That said, it looks like a spring garden event is on the way! Here are the full notes from SenorDeebs: