It’s almost time for Kirby to battle it out with himself over delicious dessert, with Kirby Battle Royale releasing in just two weeks. Nintendo’s surprise release of the demo version yesterday drove me to sideline the Switch and put some time into my 3DS in order to get a read on the handheld brawler starring my favorite, hungry hero.

When you first load it up the demo will put you through a brief tutorial, running through paths as Sword Kirby before meeting Bandana Dee along the way. Soon you’ll smack around another Kirby, make your way to King Dedede’s arena, and learn the stakes of this invite-only tournament: the cake of your dreams! It’s all very cute, quick and befitting of the series, and it sets the stage for the variety of modes the full game will host. 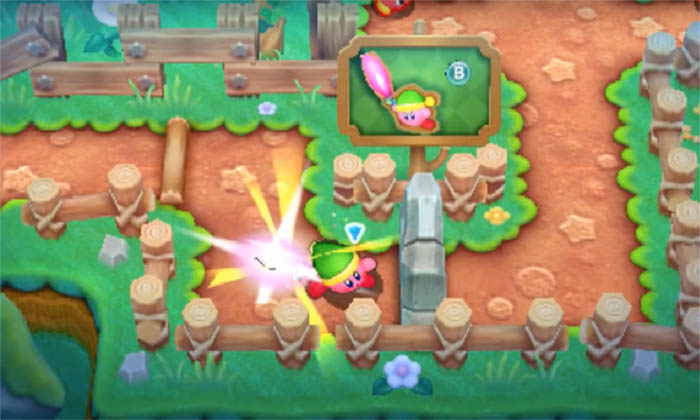 Once you’re through with this peek into the game’s Story Mode, you’ll view a quick cinematic and be shown the home menu. You have the option of playing that section again or taking on two of the game’s battles as two copy abilities: Sword and Cutter. The entire demo runs not on limited plays, but with “demo tickets.” Every day you’ll get five single-player and seven multiplayer tickets to use, with the multiplayer mode being limited to local only. That said, it does support download play if you meet up with friends and are the only one who’s downloaded the demo.

Sword and Cutter both play as you’d expect them, though without as deep a movepool as they’ve had in some titles. They both have a flurry of slashing attacks, with which you prefer boiling down to if you want Cutter’s ranged options or want to get in close with Sword. They also both have a charge attack, something it seems like every ability in the game will get. For Sword this is the Zelda-esque spin attack while Cutter throws a larger, more powerful boomerang blade. 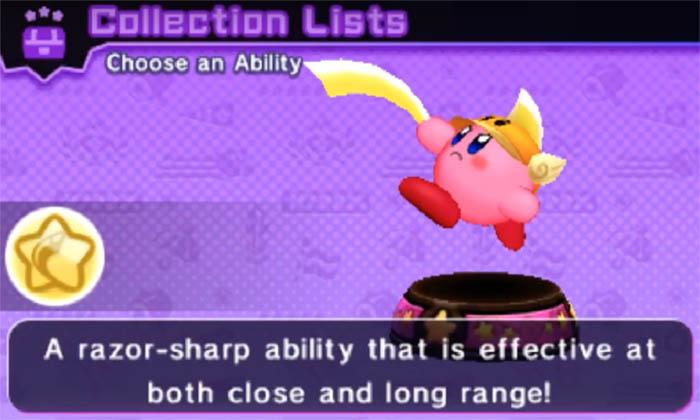 The modes on offer by default are Battle Arena and Apple Scramble. The first is the most straight forward, serving as an all-out fight where the last team of Kirbys standing is the winner. It was tricky, but using the walls of the arena I was able to pull off some extended combos. With just the abilities on offer, the fights felt somewhat repetitive, though I’m hoping once the likes of Ice, Bomb and more are in the mix the fights will end up more varied.

Apple Scramble, on the other hand, comes off as a bit more dynamic. Players rush the mini Whispy Woods to knock the apples off his branches and gather them up. Once you do this, you toss them onto a trap door and have to come around to pull a lever and gain points for the trouble. There’s some actual strategy involved here: do you focus on your closer tree or try and deny your opponents from getting to their own trees? Do you have a designated apple picker and a designated lever puller, or is it everyone for themselves? In all it ends up a lot more interesting than the straightforward Battle Arena. 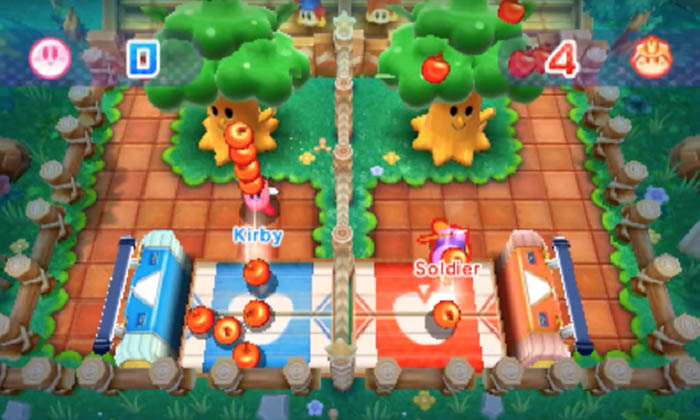 Play these enough and you gather coins that can be spent on two things in the demo: the Beetle ability and the Crazy Theater battle mode. Together they set you back 200 coins, but are worth the effort. Beetle, while never one of my favorites, is a formidable ability that adds a bit more variety. Crazy Theater, however, definitely shakes things up, putting you in a series of rounds with a given task. These range from “don’t get hit,” to “dodge Kracko’s lightning,” to even fighting over the answers to math problems. It keeps things fresh, with the winners being the first team to reach the needed amount of points. Once you have these, you’ll be tapped out on demo unlockables, but you can hoard your coins and transfer them to the full game along with early access to Meta Knight.

All in all, I’m enjoying the demo, particularly Apple Scramble and Crazy Theater. That said, it offers a not-so-varied group of abilities to choose from, limiting the appeal of repeat plays. The demo ticket system is also a bit of a turnoff, but with a second system or a multiplayer partner you can grind out plenty of coins for the base game and be ready for unlockables like costumes, music and more. It’s doing its job though, as more than ever I’m curious about and excited to jump into Kirby Battle Royale starting January 19th.

Check out our video below to get a closer look at the Kirby Battle Royale demo. We’ve played through most of it and captured our journey so you can get a peek at what the game’s all about!