Inti Creates is known for two things in my book: pixel perfect 2D action games and supporting those games for a good, long while. That’s the case with Mighty Gunvolt Burst, which has just gotten a trio of rivals added to its now-sizable cast of playable characters.

First up is RAY, from Mighty No.9. Don’t let that last part scare you off though, as it looks like she’s a highly aggressive character with a risky playstyle. With a focus on physical attacks and a health bar that drains automatically, you’ll have to get in close both for combos and to heal yourself by attacking. Speaking of attacking, you’ll have access to a unique, screen wide beam that grows in power based on your current combo.

Next is Copen, from Azure Striker Gunvolt 2. He’ll be another tricky character to use, though in a completely different way. His air dash technique is retained, allowing him to dart around in midair multiple times without touching down. His AI partner Lola will be on assist duty, providing special EX Weapons as you defeat the game’s bosses and gain their power for your own.

Last we have Kurona, the mischievous demon from Gal*Gun. She’ll be able to freely hover through the air like her angelic counterpart, and can pierce enemy shields by empowering her Demon Spear. That said, her main draw looks to be her Ducktales-style drop attack to both defeat and bounce off of enemies. 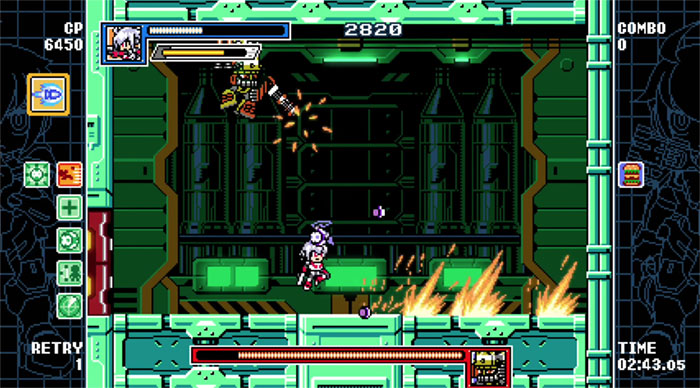 All three of them are available now for $1.99 a piece. Of them, Copen looks to be my top pick, though that could just be Gunvolt bias talking. All three seem unique and enjoyable in their own ways, and serve to add more to an already plenty enjoyable Classic Mega Man-style title.

If you haven’t grabbed it yet, though, you might want to wait just a few days. Inti Creates will be hosting a New Year’s sale for both its 3DS and Switch titles starting January 1st. With discounts as deep as 60% on some games, it’s a great chance to grab this, Blaster Master Zero and all things Gunvolt for a little less than normal. You can check out the deals and some celebratory wallpapers for each of the core titles on Inti Creates’ sale page.