Kirby: Battle Royale gets a video overview for its abilities and modes, amiibo features detailed

Kirby: Battle Royale has a few months to go until its release on the 3DS in America, but in Japan it’ll be out in a matter of weeks. To mark that, a new video has been uploaded going over the game’s copy abilities, battle types and modes in order to prime players for the upcoming fights.

First up are the 13 copy abilities taking point in this one. You’ll get a quick look at each as well as their expanded and altered abilities. My go-to, Fighter, looks to be pretty much like its usual self, though abilities like Ice and Ninja having new skills. Doctor, the newest of the abilities on offer, stands out with how its focus lies less in direct hits and more in brewing and placing “medicine.”

Next up are the ten battle types, each feeling distinct in theme with some common gameplay. They range from the simple, like last man standing Battle Royales, to more involved, such as one where you have to collect gems and toss them into a moving train. Special mention has gotta go to the competitive and collaborative fight against a giant robot Bonkers though, and I can see it being a great choice for local multiplayer.

Speaking of which, we get word on the different modes on offer. There are free battle options, local and online multiplayer, as well as a story mode centered on Dedede throwing the first ever Dedede Grand Prix. Here, you’ll face off against Waddle Dees instead of Kirby, and it looks like a cake’s going to be the top prize. 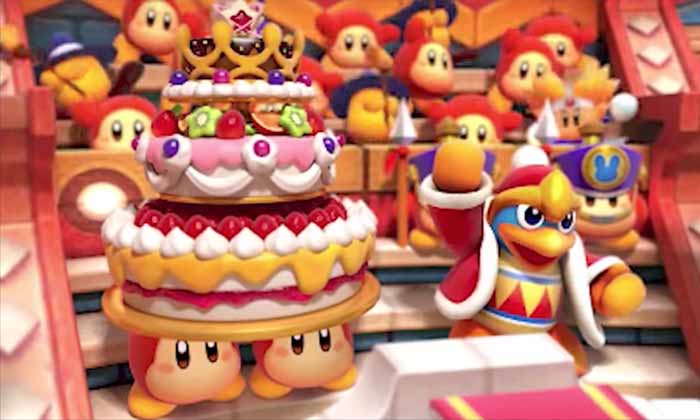 Last but not least, we get a look at the game’s amiibo features. All four Kirby series amiibo are compatible, along with fellow HAL character Qbby from BoxBoy!. Costumes are once again on offer, with Kirby’s amiibo giving Sword taking on the Ultra Sword look from Return to Dream Land and Qbby offering up box-bombs. Safe bet is on Dedede giving a unique look to Hammer, while Waddle Dee could go Parasol or Spear. Meta Knight’s mysterious as usual, with Sword seeming obvious — but then he’d overlap with Kirby’s own figure. Maybe we’ll see some Mach Tornadoes instead?

I’m guessing an English version of this one will come along closer to the US release in January. Before then, we’re sure to know the full extent of amiibo unlocks and other features, as well as the results of the now-concluded copy ability poll. Fingers crossed for Yo-yo!