After announcing Kirby: Battle Royale for the 3DS Nintendo also unveiled a Kirby Copy Ability poll tied to both that game and the 25th Anniversary as a whole. Fans can scroll through the list and represent their most favorite abilities, with the winner featuring in an upcoming 3DS theme and wallpaper. These’ll more than likely be available via My Nintendo once all’s said and done, but the real prize is that, if applicable, the winner could also be added into Kirby: Battle Royale itself!

Looking through the full list of abilities, some have icons on their sections. A Kirby circle means that the ability is already present in Battle Royale, though voting for them could still get them their position on the theme and wallpaper. A red circle means that even if the ability wins, it won’t be available in Battle Royale. The ones singled out make sense to me, as they’re either not viable in combat (such as Light or Mini) or redundant based on other abilities (like Freeze not making sense with Ice around). Sadly Ghost is unavailable as well, though with how it worked in Squeak Squad via possessing enemies it’s an unfortunate yet understandable omission. 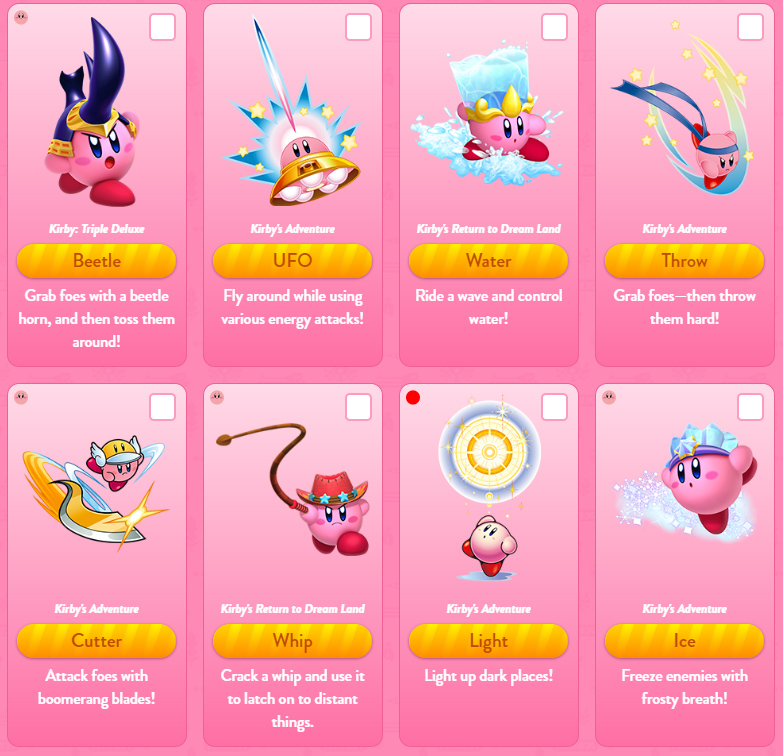 This also means we may know the full ability roster for Battle Royale. The abilities with Kirby icons are Beetle, Bomb, Cutter, Doctor, Fighter, Hammer, Ice, Ninja, Parasol, Spear, Sword, Tornado and Whip. This lines up with many, though not all, of the abilities that were present in Kirby Fighters while throwing in a couple new ones. That means thirteen “characters” for the fighting game, with the potential for a fourteenth via this very poll.

So who do I think should get your vote? It’s very difficult to narrow it down to just one, which is why I’m happy to see everyone gets one vote per day between now and October 2nd. I gave my first to Ball, both for how much fun it was to use in Adventure and how it references the likes of Dream Course and Pinball Land. I’d love for Yo-yo to keep making appearances after it was revealed for Kirby Star Allies today, and would be interested to see a moveset developed for Paint what with it having been a one time use ability. Whichever ability takes the crown and maybe the Battle Royale cup, I’m just excited to see Kirby getting this much love during his anniversary celebration.