Building up the bonds between characters has long been one of my favorite parts of Fire Emblem games, and while I never really expected that to be a part of Heroes, it’s now arrived in a stripped down form via the version 1.7.0 update. Instead of being locked only between certain characters, you can pair anyone with anyone to provide stat bonuses during battles when they’re near each other. Instead of personality building conversations, we get fun little animations between the characters’ sprites. While it’s a shame to lose out of interactions between characters from so many different games, it’s expected to be able to give players the freedom to use whoever they like; a fair trade I’d say.

More surprising though is that you can also have one character designated as being supported by you yourself. This Summoner Support ally gets a much greater boost without the need to worry about positioning, allowing you to further strengthen your most reliable and favored hero. These support rankings increase as the paired allies battle enemies leveled 35 or higher, though they’ll reset if you change who a hero is paired with. Being able to swap freely is definitely welcome, even with the restriction of needing to boost it back up again. 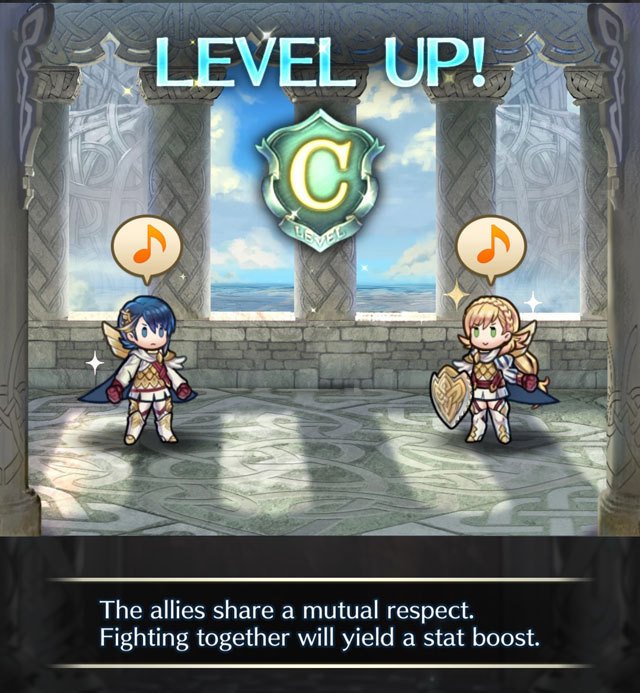 Along with this new system come smaller changes. A way to search via skill rather than just choosing characters has been added to Skill Inheritance, Arena Assault will now give you a ranking and rewards for defense just like in the standard Arena battles, and other more minor quality tweaks continue to refine the mobile game.

Last but not least, in celebration of this update there’s another Orb log in bonus promotion starting tomorrow. This’ll give a grand total of 20 over ten days, offering another full summoning opportunity alongside some of the best Focuses the game’s seen. As always, good luck!