Before those squid kids took over the internet and Animal Crossing made the whole world wild, Pikmin was my defining example of Nintendo’s ability to produce unique IPs in the present. The little game that brought a sense of being a stranded space explorer in a world that made you feel about the size of a quarter, with only 30 days to salvage your ship before you ran out of life support, was one of the GameCube’s best and earliest. All of this rests on the Pikmin whose cute designs and seemingly sad existence managed to take the game from an offbeat RTS-esque title to something so much more, all from the mind of Shigeru Miyamoto. With two other worthy (and some might say better) sequels, the Pikmin series managed to become a Nintendo staple in record time.

Hey! Pikmin barely feels like a part of that legacy.

Once again, Captain Olimar has crash landed on a planet and doesn’t have the means to return home. Thankfully, the Pikmin live on this world as well and are here to help him gather the necessary fuel he needs to travel again. The story is minimal and unobtrusive, bringing nothing new or compelling but carrying the game enough to set the stage. Rather than giving players an exposition, Hey! Pikmin is content to let the Pikmin’s adorable antics serve as your entertainment. That said, anyone expecting the familiar open environments and time management should be warned that those are nowhere to be found here. Instead, this is a tap-based exploration game, where you need not worry about cultivating Pikmin or organizing them for a particular task. It’s a shame to see so much depth and tension go, but once I shook off these feelings, I was able to enjoy the game on offer for all its own merits. 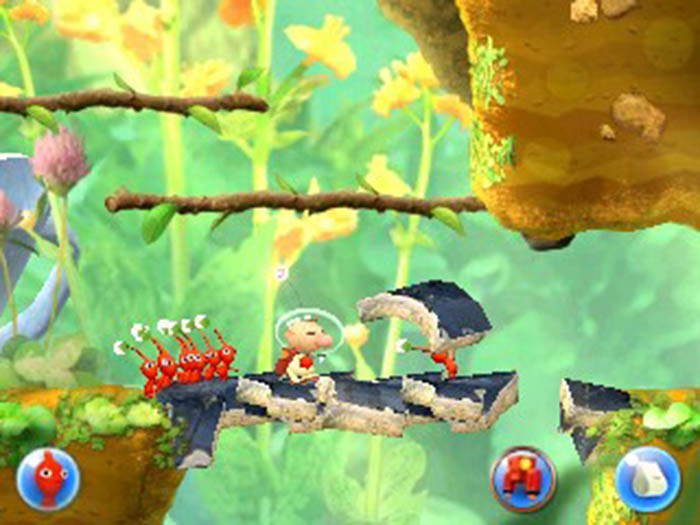 There’s plenty of things to like about Hey! Pikmin’s 2D puzzle-platforming action. The touch controls are responsive — and this is coming from someone who normally bemoans any touch-riddled titles not named Kid Icarus Uprising. One comparison I’ve seen thrown around includes Kirby Mass Attack, which isn’t too far off, yet Hey! Pikmin still has its own level of nuance to stave off being seen as a mere retread. At times, the perspective of Pikmin’s tiny world even gets an added sense of height thanks to the dual screen nature of the 3DS family of systems, with some enemies extending up from the bottom screen to the top and the high flying yellow and winged Pikmin able to cross the dual screen boundary when tossed.

In seeking out Sparklium (your ship’s required fuel), both in its natural form and based on the worth of various treasures found in the stages, you’ll find that the puzzles and combat aren’t all that demanding. As far as things new to the series go, Olimar has picked up a jetpack to accommodate the 2D space and its accompanying puzzles, though it never felt particularly fun to use, nor did it make me feel smart for utilizing it when needed. This lack of challenge isn’t a problem in and of itself, but it can make levels seem somewhat slow and unengaging. There are some standout moments when it comes to levels’ game mechanics, with the point in the game where I acquired the winged Pikmin being one of them. I just wish the earlier portions showed that same level of cleverness. There’s also no real consequence to almost anything in-game. Olimar does have a health meter, but replenishing pickups and checkpoints are frequent, removing any possibility of a real challenge. 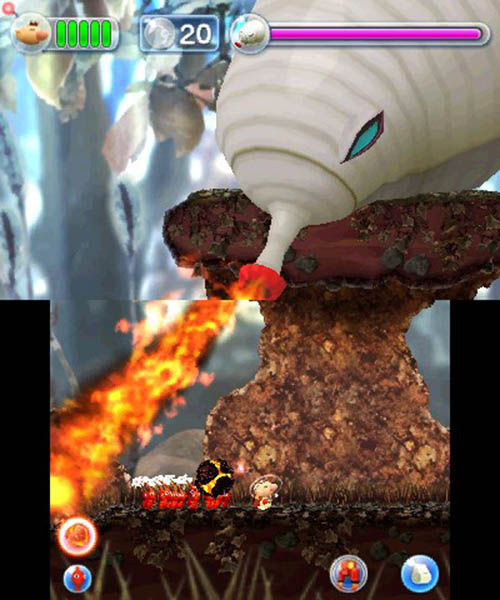 The biggest tell I had of the game’s lack of tension was how little I cared when my Pikmin were lost or even killed. In other titles, those tiny ghosts broke my heart and would have repercussions on whatever task I was attempting at the time. Hey! Pikmin lets me backtrack a bit; simply tapping in an amiibo will give me more Pikmin to replace those who were lost. The game does track if you’ve completed a stage by finding all 20 of its Pikmin and not losing any of them, but that turns into an objective rather than the natural instinct I had while playing previous games. To its credit, that does make the game more accessible and less demanding, but not even enemy encounters or boss battles shook things up when it came to a higher level of challenge.

In between stages you can enjoy a couple extra features that add to the overall package in varying ways. Pikmin Park allows you to direct your Pikmin by color to excavate areas with the hope of finding more Sparklium and treasure. It all happens on its own once you’ve told them where to go: the Pikmin run off to start searching as you play through the game. It was all very hands-off and automatic, but eventually, checking in to grab a reward or direct my Pikmin became a part of my routine with the game. I wish I had the option to skip the scene that played when the Pikmin I brought back from a stage ran into the Park — having to sit through the scene nearly every time I opened the Park grew old very quickly.

The awards from its separated areas eventually run out as well, which could have been fixed if there were more rewards to claim (I think I cleared the place out by the halfway point of the game), or even just more areas to expand the feature. 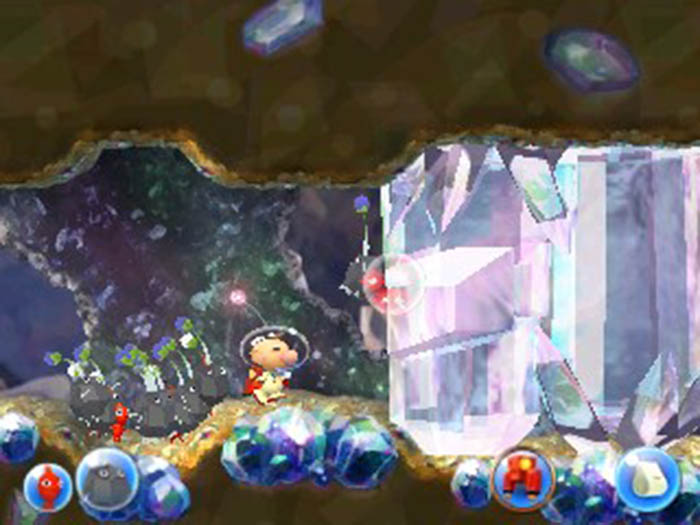 The real winner here is the ship’s descriptions of your found treasures, enemies, Pikmin and more. Reading up on the flavor text adds to this world in a fun way, with the treasure names making me wonder just what would be said about them whenever they were discovered. The treasures even manage to occasionally serve as fun references in their own right, with a few representing some classic games and Nintendo properties. It was this that made me feel inclined to gather up every treasure in the game even when I shirked on no death runs or grabbed all the Sparklium I could.

Amiibo get in on the fun for both these modes as well. By scanning in the new Pikmin amiibo at Pikmin Park, you can level it up based on how many Pikmin you’ve accumulated across the game. You can then tap it during a level to call in backup Pikmin if needed, with the amount increasing as it levels up. The Smash Bros. Olimar amiibo can also get you some extra Pikmin, though it’s locked at four and can’t be leveled. These two, as well as figures in the Super Mario, Splatoon and Animal Crossing lines, are all also available as treasures once scanned in and collected via mini-puzzle stages and have some of the best writing in the game tied to their descriptions.

At the end of the day

Hey! Pikmin takes portions of its predecessors’ features and boils them down to just a few, key elements. Even with what’s lost in the transition I found myself drawn into their tiny world, wanting to find every treasure and secret alongside my plant-like friends. Though it isn’t always at its best, the journey was enjoyable and provides the world with a Pikmin game I think anyone can enjoy without any of the intimidation associated with the franchise’s past entries. Where it falters in real time management and deep thinking, it instead offers simple fun and stress-free exploration. This is the terrarium to the console titles’ untamed nature.

I really do hope that a true Pikmin experience can come to life on a handheld, Switch or otherwise — for now, this deviation that allows me to take my little Pikmin with me wherever I go (no whistle required) will do.

Leave a Comment
Buy at Amazon Buy at GameStop
7.0 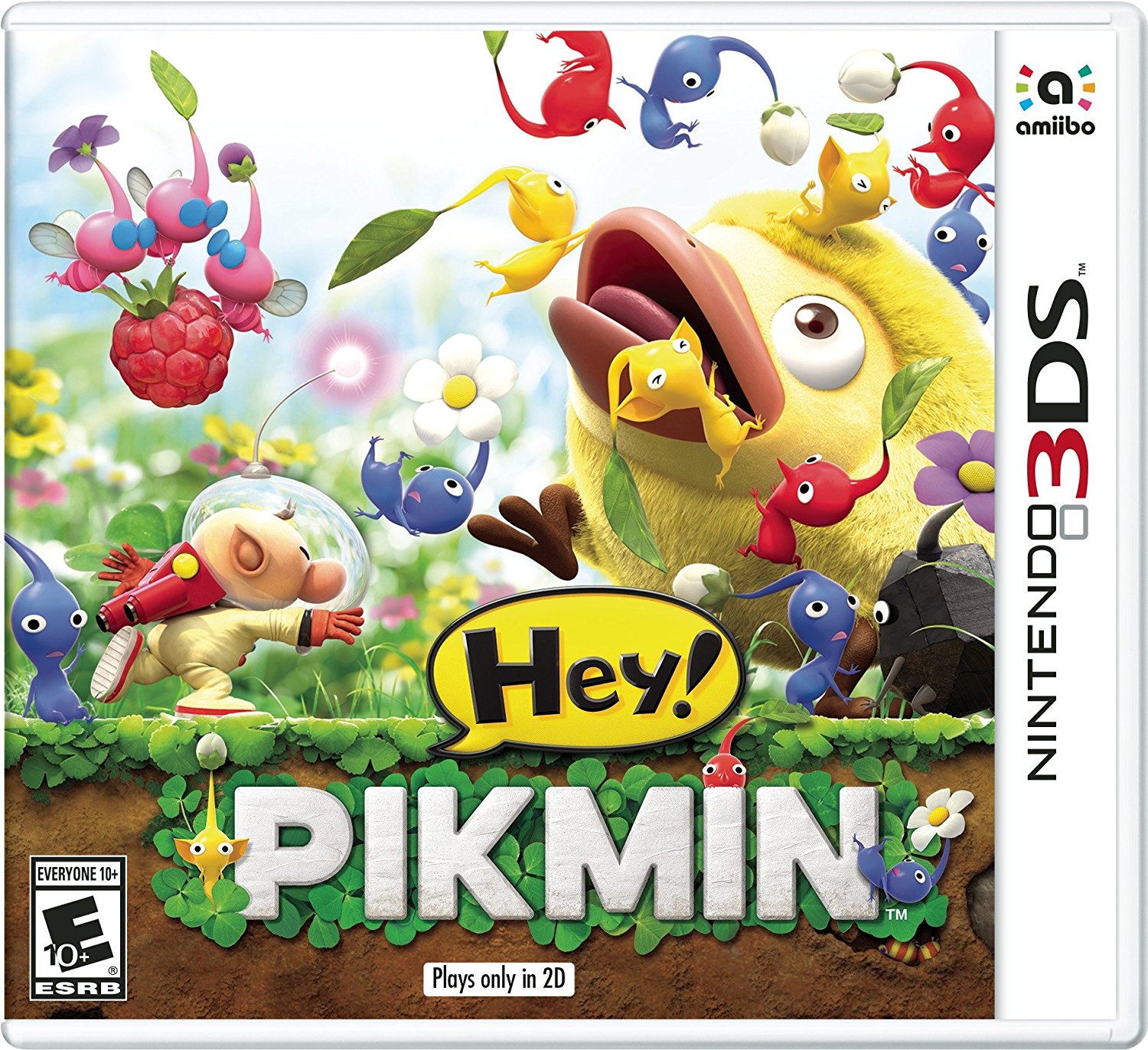