Owls and orbs are objectively good things. Fire Emblem Heroes manages to have both of those, along with all the blue haired swordsmen and magic users I could ever ask for, so naturally I was excited to see what tonight’s broadcast focused on the game would offer. August will be a busy month it seems, with plenty of in game events and additions to go around. Long time fans will have plenty to get excited about, and anyone curious about starting up this one for the very first time may want to read on as it seems like the dev team has got you in mind more than anyone. 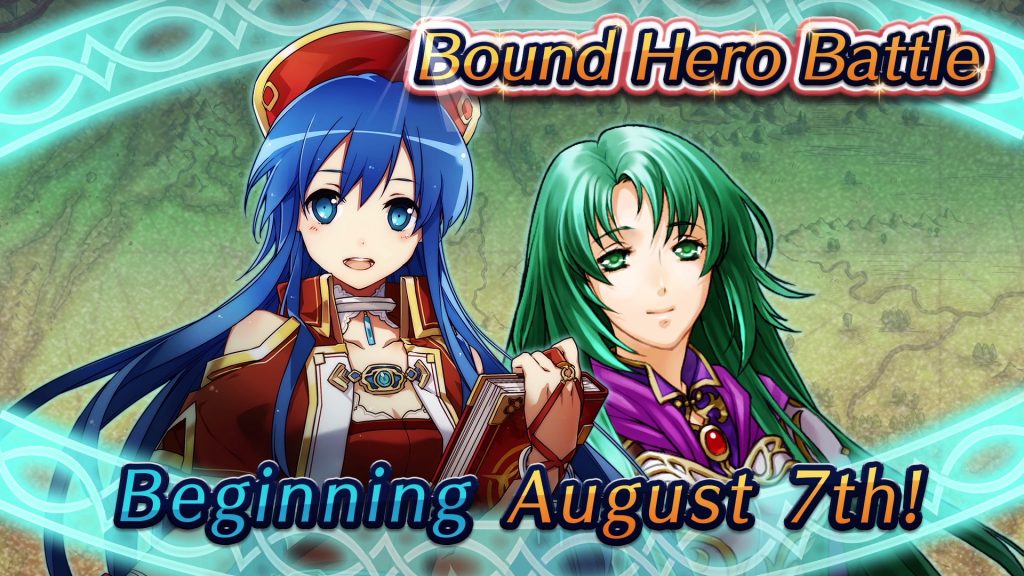 First up was a new Bound Hero Battle being announced, this time centered on The Binding Blade’s Lilina and Cecilia. The map and skills for this one look tricky, but those who can complete its various difficulty levels will get orbs for their trouble. A focus will accompany this when it starts on August 7th, featuring the two mages as well as their game’s main character and Smash series regular, Roy. A new Grand Hero Battle was also announced, bringing The Sacred Stones’ despicable ‘Moonstone’ Valter to the game in the later half of August.

A new round of Tempest Trials will be coming along too, continuing the theme from the previous one, with Celica and some of Alm’s allies getting the marquee treatment this time. Earn a high enough score and you can unlock Shadows of Valentia’s Clive as well as other prizes. There’re also changes to the set up for Tempest Trials, such as lower level rounds for new players or weaker heroes to join in on the fun as well as ways to have reserve teams saved and easily accessible when it comes time to switch out. There will also be daily triple point bonuses for your first two battles, and featured heroes will receive stat bonuses to give them an extra edge across the trials where they’ll also be gaining double EXP and SP. This one’ll hit the game on August 11th. 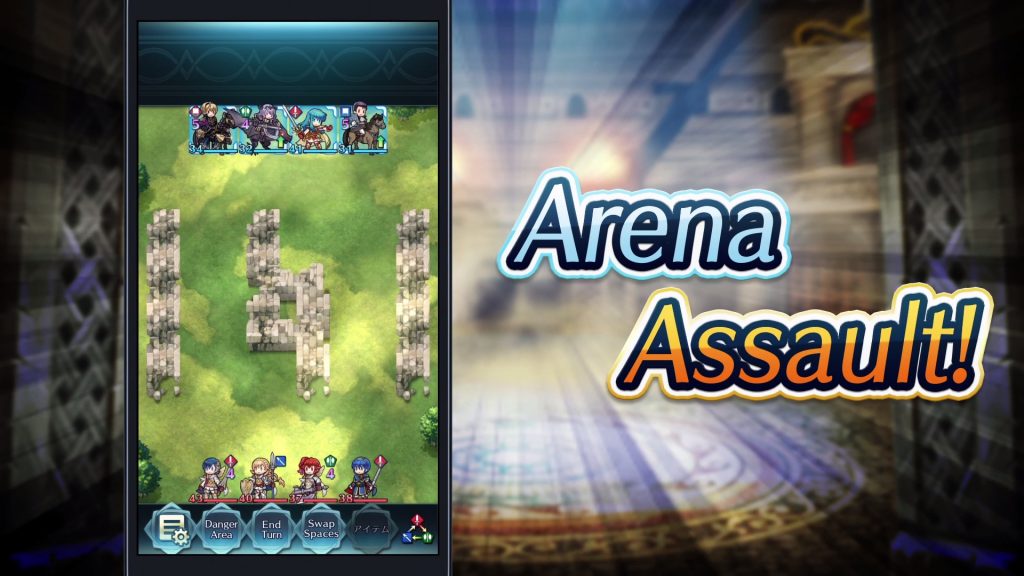 Arena is getting some more changes, this time in the form of a whole new mode. Arena Assault will allow players to go through multiple rounds of battles in an effort to get as high a score as possible, and once a round is over those four heroes are effectively retired. This Chain Battle-esque mode is meant for experts, but to compensate for the difficulty, some special Arena items have been added. Their effects range from healing, damaging enemies, getting your specials primed and ready and even more. You’ll be able to bring a handful of these into Arena Assault to use as you see fit, and there’ll be a new type of Sacred Coin prize to collect as well. No word on what it does at this time, however. This new mode, which doesn’t cost stamina or crests by the way, will be out August 8th.

Alongside this update will be the addition of a Hero Catalogue feature. In the Hero Catalogue you’ll be able to see every hero you’ve encountered in the game. Those you’ve never seen will be question marks, those you’ve seen but don’t own will be silhouettes and those you’ve summoned will be able to be checked out extensively. This’ll include their art, their voice clips, their summoning and max leveling conversations and even their map sprite battle animations. It’s a great addition for fans and collectors, and will be added in presumably in the August 8th update as well.

Keeping things hot, hot, hot we’ve got another beach themed summoning focus. This time around it’s for Fire Emblem Conquest’s royal family, though with big sister Camilla sitting this one out. Elise, Leo, Xander and female Corrin will all be in their swimwear and with new and unique weapons and skills. Xander in particular continues to have the best weapons as far as his seasonal variants go, and Leo doesn’t seem particular pleased about this aquatic development. Corrin, on the other hand, lets me use the phrase “fish tome,” so just like an amiibo, she’s become a must-have when the Focus kicks off tomorrow, July 28th.

This quartet isn’t going to be just relaxing the whole time, though, with a new Voting Gauntlet pitting them against the Ylissean beachgoers. Start to plan ahead now as to who you’ll be supporting! As always you’ll get a bonus if you’re able to use the character you’re representing, and for a brief period of time both of these Focuses will be running simultaneously. Use those orbs wisely to prepare for this Voting Gauntlet’s start on August 1st. 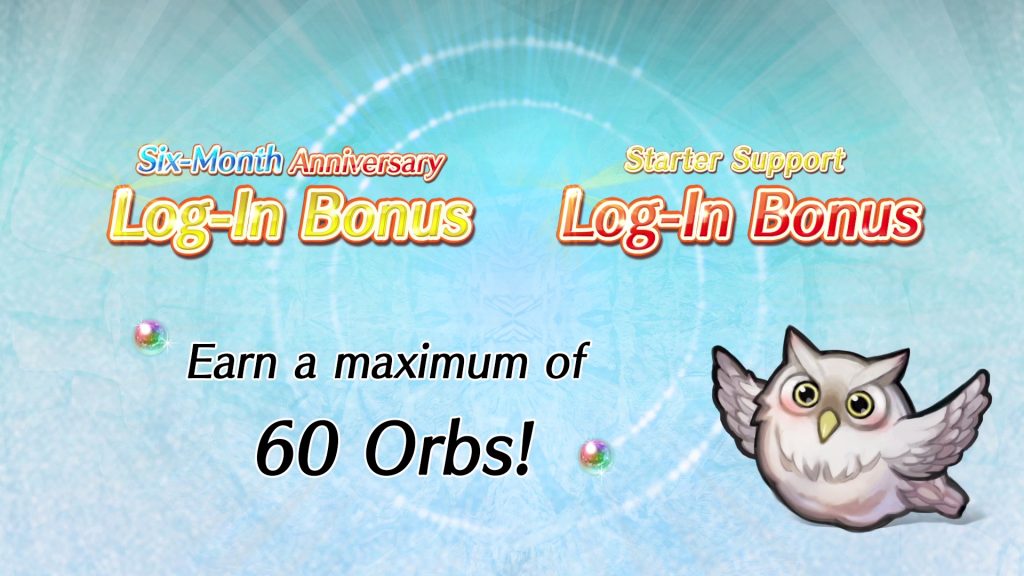 Finally, owl host Feh reminded viewers that on August 2nd Fire Emblem Heroes will officially be half a year old. The game’s come a long way and added quite a bit, and the best way to celebrate that is with more orbs! By logging in ten times between August 7th and August 22nd you’ll be able to receive two, free orbs each time. That’s a grand total of 20 across the two week period, with a few grace days in case you can’t manage. That same deal will run again from August 22nd through September 11th, meaning a grand total of forty orbs will be available to players in a little over a month as log in bonuses. Across this time there’ll also be special quests and maps to earn more orbs, Sacred Seals and other rewards, too.

Another Hero Fest was announced, offering a tailor made selection of five star heroes at 5% appearance rates. Unfortunately the heroes themselves weren’t revealed, only that they would be good choices for new players. With the bar set high from the Golden Week line up, it’ll be interesting to see who gets chosen. Could Hector take the world by storm again, starting August 10th? No idea, but I do know that logging in during that period can get you another 20 free orbs making for a grand total of sixty across the promotion period. 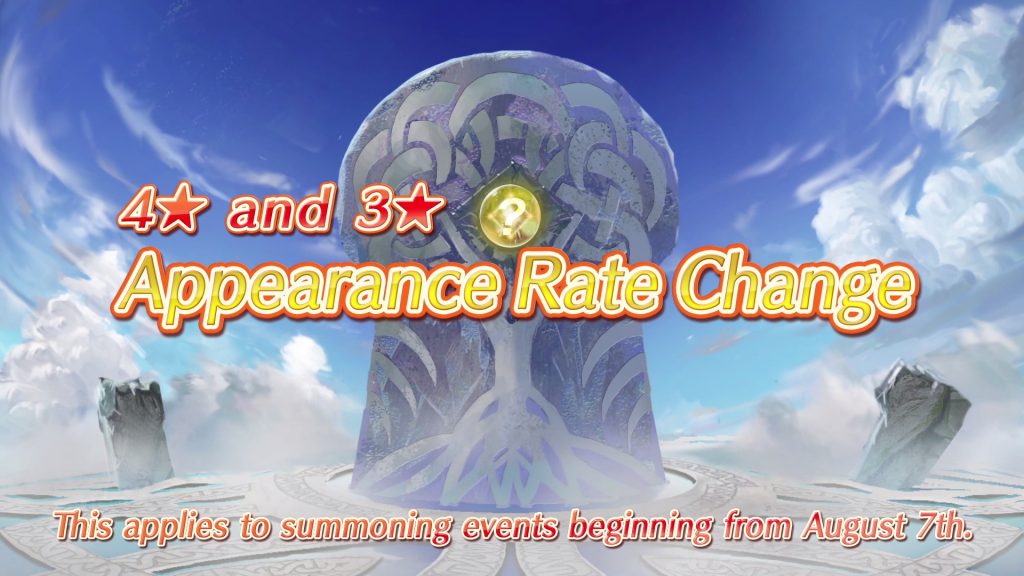 That’s right summoners, for the first time since the game came out we’re getting a seemingly permanent change to summoning rates. Starting on August 8th, the appearance rate for four and three star heroes will switch. This’ll make four star heroes the most common type able to be summoned, and three stars will be appearing less frequently overall. This’ll also be handy not just for collectors, but those trying to bolster their forces be it by eventually ranking up the characters or passing on their better skills to the heroes they want to use.

The final piece of news may be the most pleasing, as going forward all Focuses will allow players to make one free summon! These free first summons won’t cost a single orb and will apply to all events starting August 7th. Sounds like this leaves the Nohrian Summer heroes out of the equation even if they’re around for the change over, but now there’s always that single chance you can pull just who you want in a given banner. Maybe I’ll finally get Lilina after all this time?

That’s it for the Feh Channel broadcast, though one note in the middle of the presentation deserves a brief spotlight. The developers are actively listening and taking feedback into consideration for this game. As someone who’s played it daily since day one I appreciate that and have been overall pleased with it, even with the random elements present. Make sure to check out all of these developments and additions as they make their way to the game, and speak up about what you like and don’t like! Til next time, good luck with your summons and see you in the Arena.