In addition to a brand new trailer that was released earlier tonight, Universal Studios Japan has issued a press release about Super Nintendo World. We’re getting closer to a specific release date, initially slated for 2020 opening, the theme park expansion will be opened prior to the Tokyo Olympic Games. In addition, it was reaffirmed that Universal Studios Japan would be the first location to open this Nintendo themed world.

While it doesn’t appear in the press release, get ready for Mario Kart in real life! The official site confirms this, along with the shops and restaurants that’ll be inside the area. 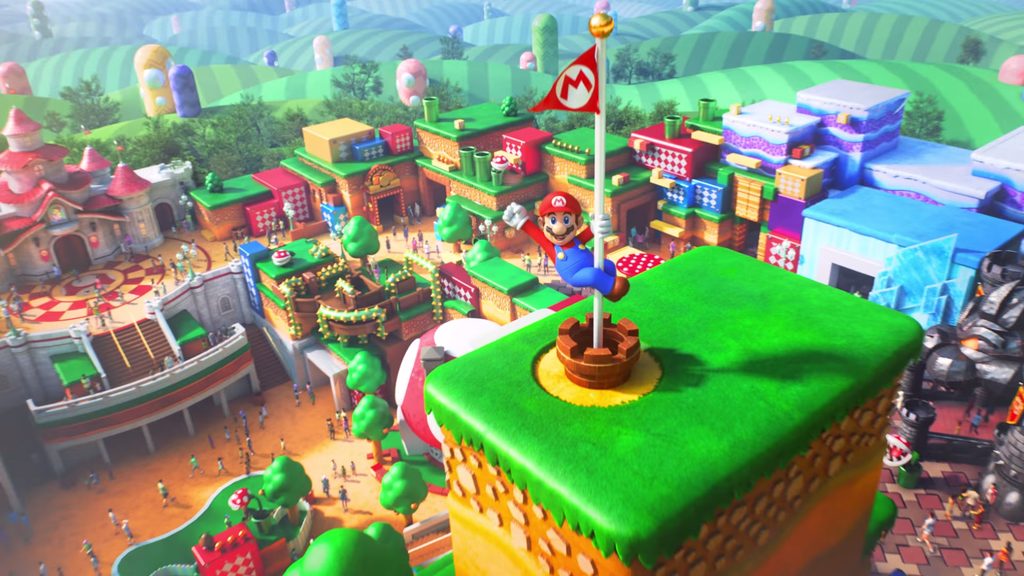 Below is the full press release (run through Google Translate, so pardon the grammar).

The world’s most popular Nintendo characters and the area “SUPER NINTENDO WORLD ™” which is the theme of the world view are coming to Universal Studios Japan in the world for the first time. The opening time is scheduled to be held before the 2020 Tokyo Olympic Games are held. As for the Nintendo theme area, as announced by Universal Parks & Resorts and Nintendo on 29th November 2016, it opens in the theme park of three universal studios in the world in the United States Orlando and Hollywood and Japan Universal Studios Japan will be the first to open in the world.

”SUPER NINTENDO WORLD” is an unparalleled ride and attraction (scheduled to be the world’s first ride utilizing state-of-the-art technology * 2), an interactive area, It is a huge complex area with two layers with shops and restaurants, and the investment amount is expected to be more than 50 billion yen at only one Universal Studios Japan. This “SUPER NINTENDO WORLD” will be built by extending the park area to the parking lot in the park premises now and a part of the future expansion site. Professor Emeritus Katsuhiro Miyamoto of Kansai University estimates that the economic effect created by Universal Studios Japan for 10 years after the opening of “SUPER NINTENDO WORLD” is about 6.2 trillion yen in the Kinki region, about 11.7 trillion yen in the whole country, its employment effect Approx. 108 thousand people * 3. Universal Studios Japan will disseminate the charm of “Nintendo”, a wonderful entertainment brand that Japan is proud of, not only to Japan but to the world.

For many years, “SUPER NINTENDO WORLD” gathers a large number of Nintendo characters worldwide, with a focus on the “Super Mario” series, which has been keenly loved by fans all over the world. Nintendo Co., Ltd. Representative Director Nintendo Co., Ltd. Creative Fellow Mr. Shigeru Miyamoto including Nintendo’s creative team and universal creative team (President: Mark Woodbury) boasting outstanding creativity and technical power are powerful Under a partnership, I will stick to the quality thoroughly and reproduce it. “SUPER NINTENDO WORLD” is worthy of its name, becoming the world’s first theme area to enjoy the Nintendo game world throughout the day using the five senses, and will attract guests from overseas as well as from Japan.

Gearing up to throw some red shells? Thinking about what dishes the Mushroom Kingdom might offer? What do you want to see at Super Nintendo World? Let us know!