Shantae: Half-Genie Hero gets an ‘update of evil’

The next wave of Shantae: Half-Genie Hero’s stretch goals and DLC is the focus on WayForward’s latest KickStarter update. Risky Boots will be back this summer and instead of saving Sequin Land, you’ll be destroying it. As for how, a few key details were shared.

Risky’s pirate gear from Shantae and the Pirate’s Curse is making a comeback. Her cannon and pirate hat are back, but some new items will also become a part of her repertoire (anyone itching for a grappling hook?).

Since Sky and Wrench won’t be around to take Risky around the overworld, Risky will get to order her crew from her Captain’s Cabin.

The enemies will be new with this update, and only two of the many new ones that have it out for Risky Boots were teased. They’re both old-time baddies that get a fresh update: Wetman and Batgal. 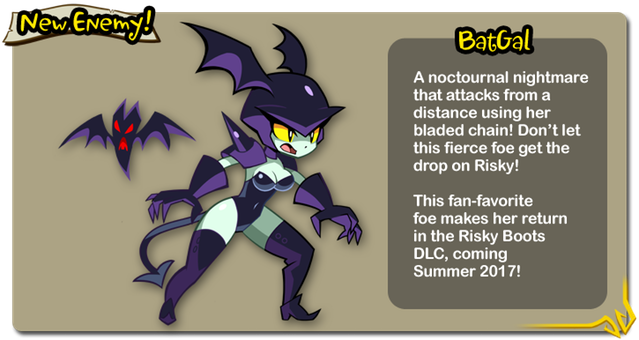 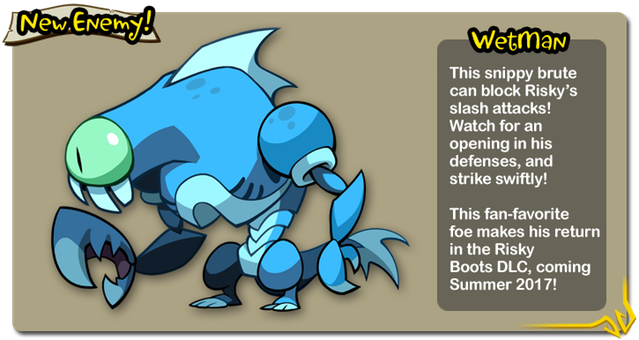 The DLC will be free to all backers and will be the focus for the next major KickStarter update. Other details touched upon in the update cover physical backer rewards and character skins.

Kickstarter backers who contributed more than $55 USD will receive the “Tinkerbat Dance DLC” — a new Transformation Dance for Shantae that allows her to morph into a Tinkerbat.

In addition to gliding with a “Tinker-Copter,” Shantae will also be able to slash with a “speedy scimitar.”

The transformation will be available in Shantae, Hero and Hard Core Modes.

The Tinkerbat Dance DLC will only be made available for backers and no public release is planned.

Lastly, WayForward has promised that playable modes for Sky, Bolo and Rottytops are still in development in addition to Costume Modes.

No precise release date was provided for the DLC other than “this summer,” but it seems like this update will bring a ton of new treasure for Shantae fans.