Back in 2005, the Dragon Quest series was relatively unknown in America, especially when compared to its overwhelming popularity in Japan. All of that changed thanks to Dragon Quest VIII: Journey of the Cursed King becoming a hit on the PlayStation 2 worldwide, giving some well deserved renown to the series that has practically defined the Japanese RPG. Flash forward to 2017 and it’s back with additional content, gameplay tweaks, and a few other changes that make the overall experience more user-friendly. It might take away some of the challenge and longevity, but this streamlined and still absolutely massive game has supplanted the original release in my eyes. It may cling to the past a little too much and has its moments of frustration, but I still put in dozens of hours into the remake. With a likable cast of characters, a story that doesn’t bog itself down with complications, and distilled RPG gameplay at its core, Dragon Quest VIII is well worth a look for fans of the genre.

The Essence of adventure

Opening with its adventure already underway, DQVIII may feel a little bare and basic if you’re starting it for the very first time. You’re a silent hero exploring a town, gathering information from its residents, and then set out to find a key item for one of them. You cross an overworld to find a dungeon, explore it and fight the boss, return to town, and learn more plot details. Then it’s back to the overworld to head to the next town, fighting monsters all the way for experience and gold to become stronger and better equipped for newer challenges. Rinse, repeat; again and again.

While this kind of repetition is at the core of nearly all Japanese role playing games, Dragon Quest made me more aware of it than nearly any other game I’ve played in recent memory. This is not just a PS2 port, but one of a game that purposefully evokes the mechanics and identity of NES games that practically invented this flow. Intentional or not, that leads to the age showing in the game’s design. How much this affects you will depend on your appreciation for the genre and how you warm up to the other elements of the game. I’ll even admit that the early hours had me initially unimpressed in spite of the aspects of it I did like. These misgivings were eventually past me, however, as I realized just how much I was smiling at the unmistakable charm that makes Dragon Quest one-of-a-kind.

The Gang’s all ‘ere, Guv

The first thing that really broke up the repetition for me were the trademark monsters. There’s a wide range of creatures to combat across the world, even with palette swaps showing up eventually. From the weak as can be Slime to the sturdy Golem, the silly looking Goodybag to the actually intimidating bosses you’ll find along the way, Dragon Quest as a whole owes a lot to these guys. Manga artist Akira Toriyama, the man behind Dragon Ball and the character designer for Chrono Trigger, has made every enemy a treat to see, battle, and eventually even collect to an extent. His work and my fondness isn’t limited to just the monsters though.

Once I started meeting party members and seeing their progress through the world, I really started to enjoy not just leveling them up, but seeing how they react to and grow from the events across the game’s story. Yangus, Jessica, Angelo and King Trode carry the game, with Yangus standing out in particular for his amiable personality and eagerness to grow as a person. They all operate around you, the silent Hero (aka the Guv) that you get to name yourself. Supporting characters in this are enjoyable as well, though often times they’re defined less by who they are and more by what they do for the game itself. This isn’t rich, thought provoking storytelling, but that doesn’t make the tale of fantasy adventure any less fun. That said, there are times where you’re sent backtracking and fetch questing over any meaningful progress which stilt the pacing, already somewhat bogged down by the game’s classic RPG adherence. Special mention should also be paid to Dhoulmagus, with the game handling its antagonist well. The party is always just behind his trail of evil, with mysteries unraveling around the villainous jester as time goes on.

For fans who’ve already played the PS2 version through and through, the story itself only offers a little bit of new content. This includes some more backstory and details for Dhoulmagus and the Hero, as well as a new second ending. While they don’t offer as much to the narrative, previous NPCs Red and Morrie are now available as party members over the course of the journey. Gem-loving thief Red comes along naturally but the over the top monster-loving Morrie will require a bit of extra work via one of the game’s side quests. They were already likable enough but having them as characters to develop can make even familiar challenges for repeat players seem new and interesting.

A Slime draws near!

The gameplay is, again, very straightforward for an RPG. You’ll gather new abilities and spells over the course of the game that give you more powerful options, with the majority of them tied to the game’s skill system. Some of these help you in the world map, like fast travel, but the majority are tied to combat. As you level your characters they’ll gather SP, which can be put into specific parameters. For example, the Hero can become more proficient with swords to gain new techniques that target specific enemy types. Every character has five options, allowing you to tailor their growth to your playstyle. This quickly became my main incentive for leveling, getting me excited to gain new attacks or buffs alongside the standard stat increases that come with experience.

Battles themselves are bareboned affairs, presenting the monsters ahead of you and the status and menus along the bottom. For Nintendo fans it looks the most like EarthBound, as the Mother games were heavily influenced by Dragon Quest. Again, encountering these monster designs helps make battles more flavorful. It’s also where the game lets its sense of humor shine through at times, with status effects like being forced to dance or fall over laughing that are shown to your characters’ chagrin. Eventually, there can come a point when you feel like you’re on autopilot with map encounters, as eventually optimized patterns become the norm. Where things really shine are boss fights, where the enemies show unique strategies of their own and much more threatening attacks. Be warned, if you don’t level up plenty, these encounters can drop a steamroller on you and even when prepared the tide can turn on a moment’s notice.

Beyond the already mentioned additions, the 3DS version brings plenty of changes to the experience to make things a little more convenient for players. Random encounters are no longer the norm, with monsters instead walking around visibly on the world map. (Again, think EarthBound.) SP can now be stored instead of needing to be used as soon as you level up, meaning you can make more longterm plans and avoid situations where you might invest poorly just because you had to. You can also see when and what skills are gained, making the affair much more appealing for longterm planners. Stats have been re-specced both for enemies and the party, making certain things more manageable and characters that may not have been optimal more usable.

Speaking of optimal, a small menu has been added to the bottom screen allowing quick access to frequently used spells and menus, such as fast travel, and full maps are shown for most areas.

It’s a great, wide world out there

Outside of standard questing, DQVIII has plenty of optional quests and content for players to enjoy. The world map is dotted with plenty of treasure chests, and seeking them out can lead to rare or powerful items. One of these items, the Mini Medal, is a second venture all its own. A NPC eventually met in the game will reward players with other rare items for locating specific amounts of Medals. These items, while fine on their own for a while, can also be used in an Alchemy Pot. By mixing certain combinations of the game’s myriad of items, you can end up with even greater ones – and while the game does teach you some recipes, there are many, many more than what you’d think by just those.

Chests and Medals aren’t the only things you can find out there, though. After locating the game’s Monster Arena, those lovable monsters can occasionally be recruited to your team. You can then mix and match your recruits into a trio of warriors to take part in battles against other teams of monsters. It’s surprisingly addicting once you find a group you like, though with everything being out of the player’s control, it can end up frustrating when luck isn’t on your side. It’s also necessary to conquer this Arena to recruit Morrie to your party, though all in all I enjoyed it plenty. There’s also a new camera feature to the 3DS version, where players can stop and snap pictures at nearly any point on the world map. These can be saved to your SD card and shared via StreetPass, and an NPC will also reward you for taking certain, specific shots.

Dragon Quest VIII is a long, large-scale game and while that can seem intimidating at times, these diversions add a lot to the charm. There are also special, time and character specific conversations you can find on occasion. Visiting party member Jessica’s hometown can improve her relationship with her estranged mother, for example, and it’s the details like that that make the game’s world feel more substantial. While there’s plenty to discover out there, however, the world map can end up feeling somewhat barren. It’s a double-edged sword, occasionally leading to long stretches of nothing special, but then making every discovery you do come across feel that much more impactful. Still, if you find the game drawing you in and you want to see everything it has to offer, it can take you well over a hundred hours.

Dragon Quest VIII: Journey of the Cursed King stands as one of the most popular and successful titles within in its own series, and a fantastic experience beyond that pedigree. The game’s localization is one of my favorites of all time, using (at times heavily exaggerated) accents to the fullest. With how massive and time consuming the game is I feel having it as a handheld makes that entirety of it, from the core story to long stretches of grinding, much more manageable. In porting it to the 3DS, Square Enix has given this masterpiece a chance to shine again and I’m pleased to say it holds up spectacularly. While it does show its age at times and won’t make non-fans of RPGs into believers, Dragon Quest VIII is another fantastic addition to the 3DS library. 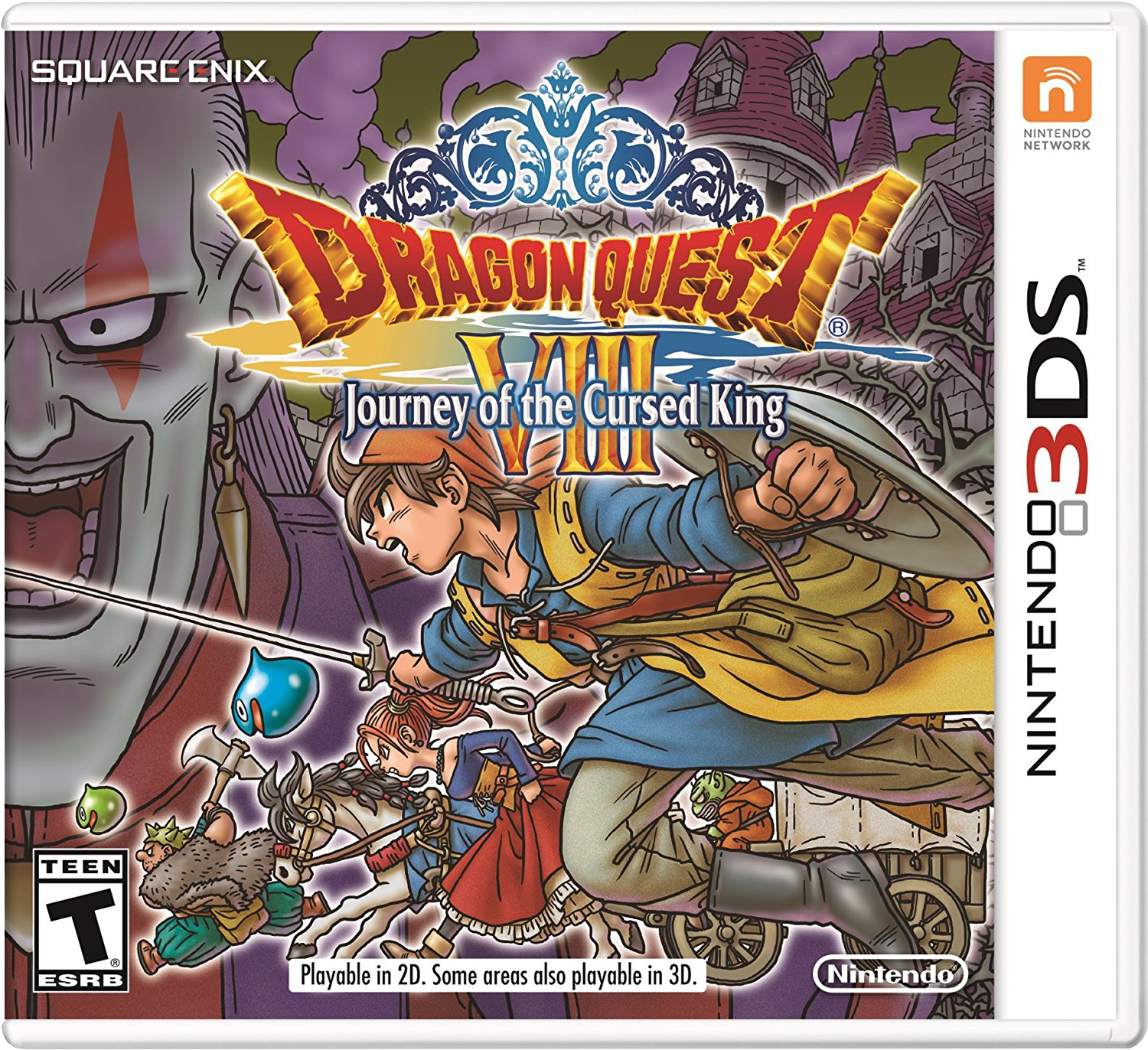